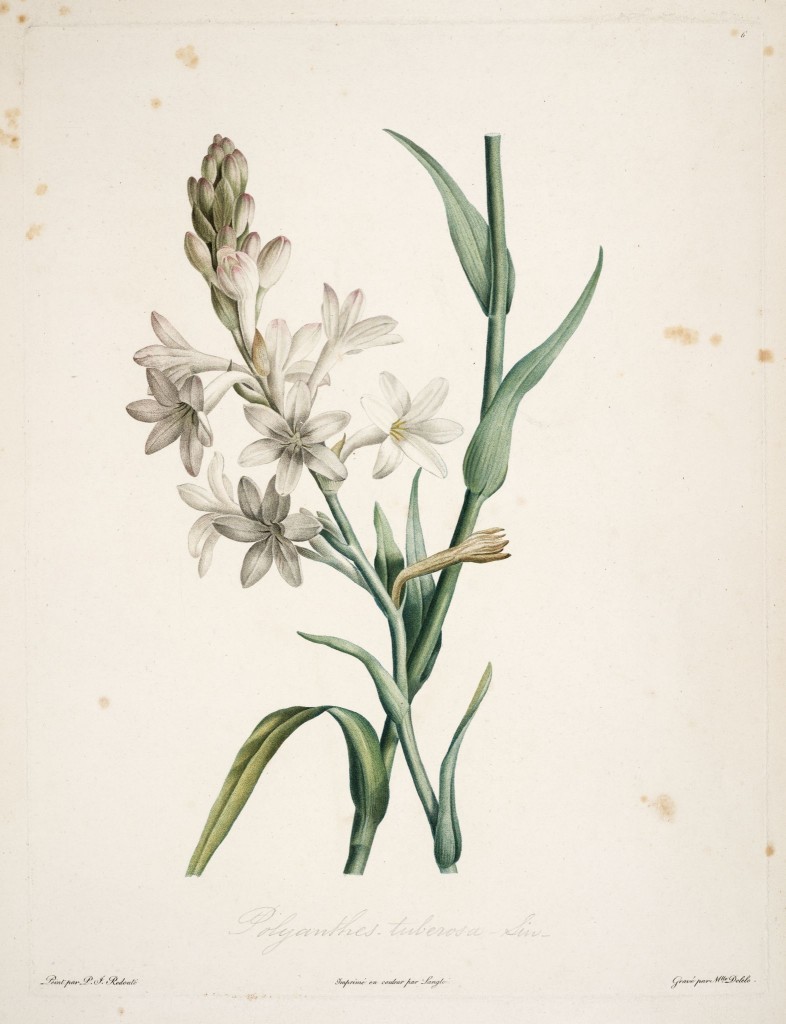 The fragrant scent of tuberose spreads its renown. Its floral burst of scent is one of the most intoxicatingly sensual and long lasting around. Quibbles such as it being a moral menace or unsafe for pregnant ladies have not been enough to deter perfumers from their task.

Tuberose is a Mexican flower which, like vanilla, reached Europe during the sixteenth century before taking the world by storm. It is a member of the Agavaceae family, as are agaves and yuccas of course. It was farmed in Grasse for a long time, knocking the perfume industry sideways with its scent. It is a particular favourite in Asia and India, where it is farmed. It blooms in June through to November on occasion. Its little star shaped, snowy-white flower clusters pack such a punch fragrance-wise that they continue to transmit their scent more than 48 hours after having been picked. Tuberose is intensely lush and sensual, with fresh green accents and spicy undertones.

As it has one of the sweetest floral bouquets this flower has ended up in many prestigious soliflores (perfumes with a unique floral dominant). But there’s a twist in the tale: such aromatic supremacy could not avoid some negativity, even a bit of slander mongering.  Negativity due to the queasy discomfort that could result from its heady scent. Slander mongering went one step further, accusing the flower of being nothing less than « sinful »: inciting to debauchery. It goes without saying that young girls (because sin is surprisingly considered to be the preserve of women, probably due to a masculine thoughtlessness) were to be prevented from frolicking on their own in a blooming garden of tuberose, and especially not in the evening!

This flower was Yves Coueslant’s mother’s favourite. One of the three founders of the House, Yves spent his childhood in Vietnam. He dedicated his eau de toilette  Do Son, to her. It is also available as an eau de parfum. In this fragrance, the freshness of the tuberose plant confuses with the intoxicating scent of its flowers.