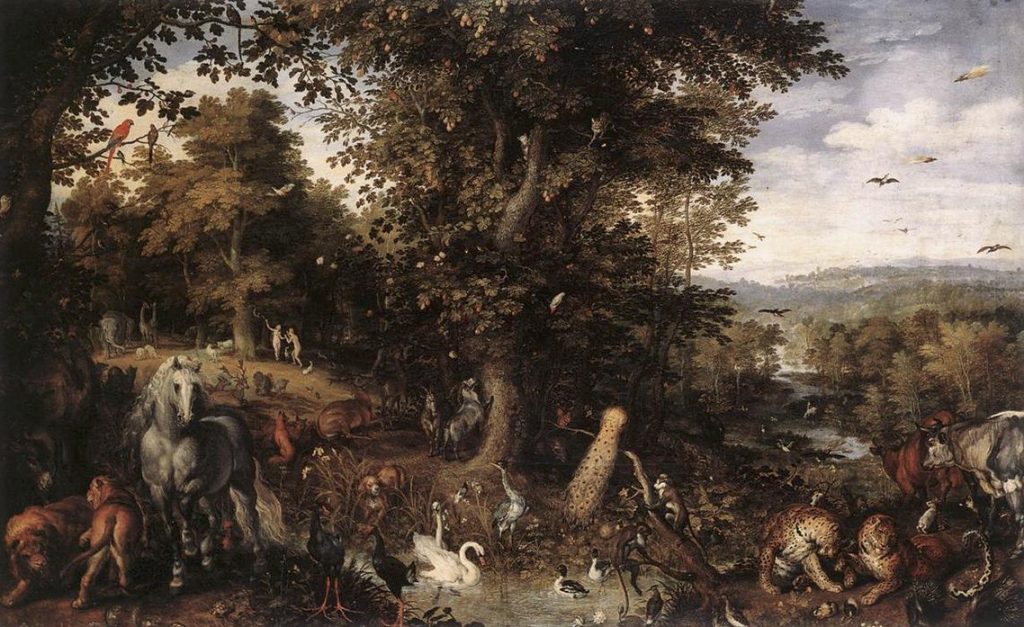 As an enclosed space full of flourishing flowers planted by human beings, the garden is not as ‘hemmed in’ as you might think. A piece of land encompassing both nature and domestication, the garden goes back to Neolithic times. It is an endless blossoming of form, function and purpose.

Gardens are lush, regardless of whether their mission is to provide food or to be aesthetic, ornamental, gallant, political, religious or mythical in nature. They express an era and a culture.

Food-wise, a garden can be a vegetable garden, a market garden, an orchard, a working garden or an organic garden. It can house greenhouses or be horticultural – the art of gardening in its original sense – in any geographical or cultural latitude.
The original model is mythological, the Olympus Garden of the Gods; the gardens of Alcinous that so stunned Ulysses; the Garden of the Hesperides; and then the garden to beat all gardens, the Garden of Earthly Delights (Eden in Hebrew)… and the Garden of Olives where Christ spent his final night, the garden bordering the here and the hereafter. Words are easy to understand: the distant forebear of the word paradise goes back even further than its Latin and Greek ancestors to the Avestan language (an archaic Indo-Iranian language): their word pairidaeza means garden, an enclosed space, a place with set borders.

Nevertheless, located somewhere between the earth and the heavens, and considered to be the 7th wonder of the world, were the Hanging Gardens of Babylon that Nebuchadnezzar created for his wife who was born in Persia but homesick for her native country and its mountains and forests. Hadrian’s Gardens of Tivoli were also created to remind him of the far off lands he had visited. The garden always nods to a dream: « It was in Megara, a suburb of Carthage, in the Gardens of Hamilcar…» (Salammbô, Gustave Flaubert)

The old idea of a garden mirroring another world comes from the Mesopotamian legend of Gilgamesh, a person who was very proud of the gardens in his city that were modelled on royal gardens from Assyrian dynasties. Even then, gardens were creeping into palace premises, blending in with the architecture, a show of power, a flower-filled decorative element, a place to rest or to celebrate or to have orgies, whilst remaining a source of nourishment for the soul. This enchanted and lush garden idea would be resurrected once again in the XIth century by Ismaili guide Hassan ibn al-Sabbah, the famous old man of the mountain who retired to his fortress at Alamût, with gardens that gave his séïdes nizärites – his legendary « assassins », a taste of paradise. The latter were even keener to risk their lives in their haste to return to the sumptuous delights of these artificial gardens, which were more mythical than historical in nature.

Gardens are still regarded as a place of seclusion, silence and meditation. They are the fief of the soul offering itself to the most High. The garden is therefore a philosophical or religious place as it was for Epicurus; cloisters or Zen gardens, the layout and maintenance of which require the spiritual practice of inner silence and a stress-free presence.

A botanical garden (a simple garden), a medicinal garden or apothecary is the place to grow plants with medicinal qualities and where nature is nurtured for human beings – to heal them, dress their wounds, balance them out, make them fertile, more loving or mad!

Italian, French and English gardens call also be political, making a statement about power, a mindset or an era. The geometric French royal gardens with their hedges nod to the romantic appeal of English gardens that create a picturesque visual of nature. Later on, as a result of the Arts & Crafts movement and with reference to colour research undertaken by Michel-Eugène Chevreul, landscape designer Gertrude Jekyll introduced the notion of harmonious texture, colour and scent to garden design.

Modern public gardens created as green breathing spaces for cities favour the interaction between plants and the permanence of plants. At a time when ecological issues are deemed very important, the planetary garden such as the one designed by Gilles Clément (André-Citroën Park Gardens) passes the responsibility of looking after this enclosed space to the gardener as if it were his very own endangered planet.

All this enjoyment goes on in the silence of the secret garden. The first patron of the garden has much to say on the subject: Priapus, the God of Fertility, was its protector, keeping the orchards safe from the evil eye. This is where the nymph Pomona lived, the Goddess of Fruit, who knew how to grow them like no one else. Then there was Saint Fiacre, watching over the gardeners’ virtue. But whether small or huge, private or public, the garden always remains an anchoring point and a place to dream, a lovely place somewhere between heaven and earth. Because it is in the image of the human being, everyone is urged to cultivate it and water it, like Gardens in the rain (Claude Debussy, 1904).