Tribute is paid to the great 19th century scientist, Michel-Eugène Chevreul born on 31 August – 229 years ago and although unfortunately his name is no longer remembered by many, he remains as the father of the modern candle.

First and foremost a chemist, Chevreul worked with animal fats highlighting the value of saponification from substances such as tallow which was used in candlemaking for 3,000 years but was poor in terms of light, odour and gave off thick smoke. Saponification was used to isolate a component that was then used in the textile industry, to make soap and the modern candle providing more light while producing less smoke and odours.

He also distinguished himself by his work on colours – examining the subject from the point of view of a chemist, he drew up physiological theories about our vision. The law of simultaneous colour contrast highlights the influence of neighbouring colours in the intensity of their optical effects. When adjacent, complementary colours are reinforced whereas non-complementary ones are weakened. The talented Eugène Delacroix learned this which had a considerable impact on the century’s painting movements, impressionism, pointillism and later Orphic Cubism.

The centenary of his birth in 1886 was a national event, the French minted a gold medal in his honor, Heads of State and monarchs, including Queen Victoria, sent commendations. In good health, he gave an interview to pioneer photographer Gaspard-Félix Tournachon known as Nadar, his son Paul photographing their conversation. “The Art of Living a Hundred Years, The Three Interviews with Mr. Chevreul photographed on the eve of his one-hundred and first year” published in the Journal Illustré, the ones of his interview with Nadar are thought to be the first photo-report. Australian director Dennis Tupicoff made a reproduction which was shown on the Arte channel..

The words of the old and dashing scholar on the wisdom of life and his love of learning are timeless, as are those of the French 17th century philosopher, Nicolas Malebranche, about ambition and human measure – “We must tend with effort towards infallibility without ever claiming to have achieved it.” 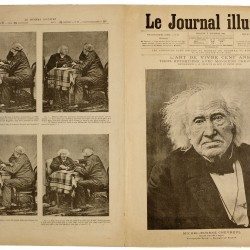 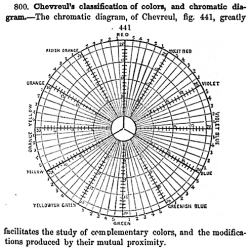