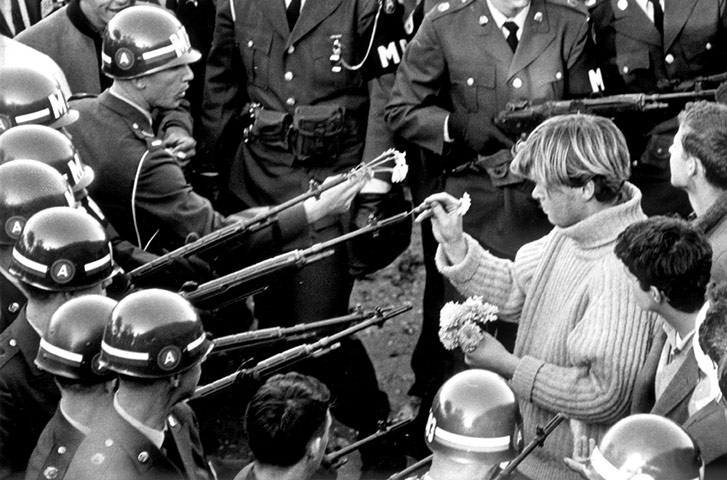 Flower Power is a slogan that bloomed in San Francisco during the Summer of Love in 1967. A symbol of love and ‘weapon’ of peace, flowers represented an anti-institutional, non-violent utopia.

Flower Power was a response to the police force and to any form of coercive rule in general. It involved donning of flowers on your person and offering them to others to diffuse their hostility. Flowers were used as a light-hearted way to disarm enemy guns.
The expression may well not have been conceived by poet Allen Ginsberg (1926-1997), but the idea and inspiration behind it were definitely right up his alley. In 1965, students at Berkeley asked him how best to respond to anticipated violence by gangs of Hells Angels during an upcoming demonstration against the Vietnam War. The poet replied just as a practising Buddhist poet would by recommending an approach that would overcome the psychology of war and its cycle of fear and violence.
He devised a flower-orientated response in an essay replying to the question posed to him by his protesting students called « A Demonstration or Event as an Example and Form of Communication or How to achieve the perfect demonstration ». It contained the following sentence: « Masses of flowers — a visual spectacle — especially concentrated in the front lines ». He prompts the seditious lot within the brotherhood to front out the leather-clad bikers and their offending ‘toys’ with harmless trinkets and crosses, brandishing the latter under their noses just like « in Dracula films » he said, to add an element of force to proceedings. These floral masses brandishing their amulets of love could not fail to soften the hearts of these brusque brutes.
On a more serious note, Ginsberg noted that these flowers, along with bells, broad smiles and mantras, diminished animosity by nudging the souls of all to remember that we are united because we are all One. To recap, a motto versus motor vehicles (the motto being the message, a phrase that suggested an ideal, and the Hells Angels were giants among bikers…)

This idea; movement; particular time in the world was taken to extreme lengths with petals sprinkled in hair and big hits recorded by great stars. It was experienced by only a few but packed a punch around the world. Flower Power is now imprinted in our collective unconsciousness: the images endure as do the hits and the expression itself is recognised by everybody. Very few poets have managed to plant such seeds in the hearts of their fellow humans. But these seeds, however, still struggle in their attempts to bloom.