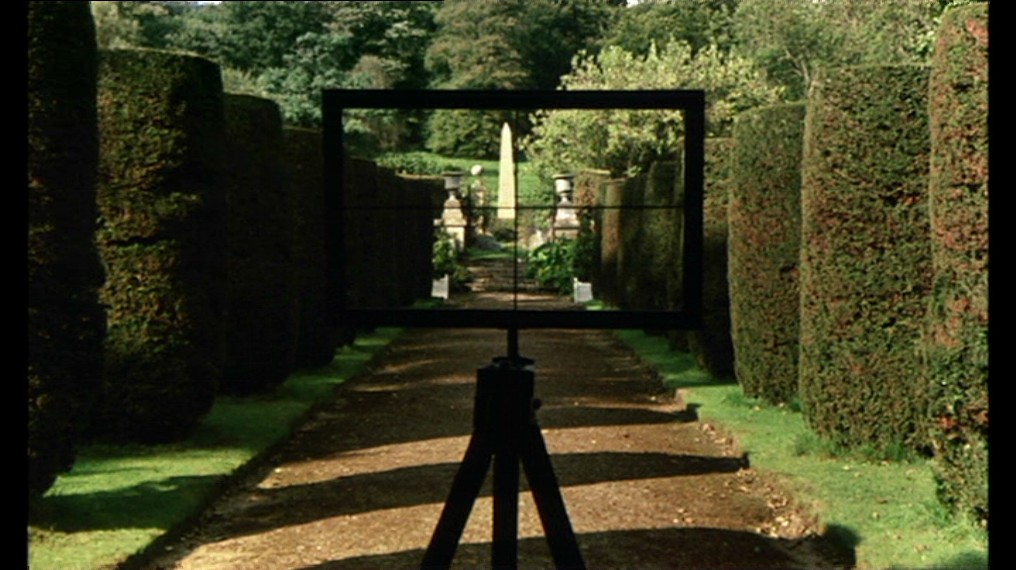 Murder in an English garden, by Françoise Zamour

The grid device, elegant, mysterious and used in a garden facing the landscape in front of it, is the tool that dictates the rules of the game. This glass grid used by the artist Neville to ponder the proportions of his motif (as did Dürer and Le Lorrain) has been utilised by landscape architects since the 15th century. The grid directs the gaze as it frames reality.

In the garden where most of the action takes place, nature is controlled, dominated and even confined just like the female form, strapped down tight in interchangeable costumes, or the outfits of the men, a flurry of artifice and refinement. Peter Greenaway directs the film as if it were a French garden: lines, topiaries and flower beds very carefully composed. The eye is charmed by harmony and symmetry, doubled up in the reflections of mirrors and windows, or inversed like positive to negative as the white of dresses gives way to black. An informed plastic artist, Greenaway toys with the tension between the two dimensions of the art, especially during meal scenes, and in the three dimensional aspects of film, accentuated by the depth of exterior shots. This pictorial conflict is intensified in the narrative by means of the tension between mastery and madness.

Actually, however framed the image may be, it is neither a reflection of reality nor does it reveal the truth. It masks it. The garden takes revenge: birdsong, the whistle of the wind through the trees, the scent of morning, the servant turned into a moving statue all add elusive details that escape all optical instruments but which are underlined (not without irony) by the uplifting music by Michael Nyman. Incongruous objects such as boots and a ladder pop up in the landscape. They indicate something mysterious, an ‘accident’ that Neville naively leaves behind in his work. The blindness of the artist reaches its peak as passion and ambition smash the rules to smithereens. Mrs Thalman then endeavours to turn the estate into an authentic English garden.