Pictorial perspective that adds volume and depth to a two-dimensional space seems to be a realistic representation of reality as seen through the eye of the viewer. But actually it’s all artifice and lies. Reality is an ideological illusion.

In his thorough report called Reverse perspective written in 1919, Pavel Florenski (1882-1937) revived the true aura of the icon in relation to the universally revered art of the Renaissance. Backed by his strong historical and technical scholarship and a belief in both aesthetic and spiritual aspects, the author analyses how perspectivist representation, which seems natural to the modern individual because it is taught from childhood, is actually a mathematical construction that is deliberately chosen and underpinned by an anthropological worldview and plan.

Genuine icons (pictorial features of Orthodox Christian art originating from Byzantine times that flourished across Russia) depict Christian characters. These pictures are mystical because of the real presence of the holy person on the icon. This real presence is opposed to the realistic representation of perspective. Although the icon appears to be an aberration of optical appreciation, proportion, strong lines and colours: they are formal choices, a pictorial knowledge-bank that has been mastered by great artists. They are veritable symbols. The icon is the very lifeblood of painting, not a picture that imitates life.

Florenski recalls that perspective, that is to say the interposition of the flat space on which the drawing is made – the space between the point of view of the viewer and an imaginary vanishing point where the parallels converge, is an optical illusion that was first applied within the context of ancient scenography to create paintings for theatre sets. This is what Roman architect Vitruvius says about a play written by Aeschylus, the set décor painted by Agatharchus giving philosophers Anaxagoras and Democritus plenty to think about. Perspective was only used to deceive, to provide a ‘realistic’ effect. The author assumes that the status of mathematical and geometrical knowledge of the ancient Egyptians and Greeks would have sufficed to advance a theory regarding perspective, but their pictorial art, just like the art in China, did not deem it necessary.

This theorisation of perspective first announced by the genius Giotto, with Florenski’s spiritual motivations, and was followed up by fifteenth century Italian humanists Filippo Brunelleschi, Paolo Uccello, Leon Alberti (in his treatise De Pictura) and plenty more besides until its theoretical, empirical and aesthetic coronation by Leonardo da Vinci, Raphael and Michelangelo.

Now Florenski demonstrates that the greatest paintings by these perspectivist geniuses deliberately betray the laws of perspective for the benefit of art, meaning and message. Either by reverse perspective,  where the height of a character is relative to his or her importance rather than distance from the eye or via more scholarly methods used to show different viewpoints in perspective to highlight the importance of a crucial element. The truth of art demands that the lies behind perspective be eliminated.

But even more than this comparison between « the truth of being » with the « realism of appearing to be», the purpose of the article goes further, avoiding the accepted clash between a primitive painting that symbolises reality and a contemporary painting that depicts reality faithfully using the science of perspective as its guide: because perspective is also a symbolisation that corresponds to a finality: that of the modern project. Florenski demonstrates theorems and scientific works to support his idea of the impossibility of pictorial realism as all the points of volume cannot be transferred to a flat surface. A simple bit of eggshell will be reduced to dust on a flat surface. Realistic naturalism is unfeasible. Perspective is therefore a kind of symbolism that conceals itself; moreover, the conditions are absurd because they are not natural: the absolute immobility of the viewer, the use of one eye to get perspective, the reduction of the viewer’s perception to vision stripped of all other senses, movement, psychism, memory etc. Therefore perspectivist art turns away from the « invention of symbols » peculiar to the pictorial act to engage in the « fabrication of simulacra » that comes with ideological intent.

The latter concerns the ordering of the world within a calibrated and functional Euclidean space. By turning away from its spiritual function, perspectivist art indicates a direction in both space and time: that of a domesticated world in which everything is ordered and governed by laws organising how things should be and how they should relate to each other – the Western bourgeois world, according to the author. Whereas real art presents everything within its primary and autonomous reality : a face, a hand, a wall, a tree – just like a kid naively sketching what he knows before perspective has been drilled into him and changes his guiding gut instinct.

Perspective is a mirage. Its world is a theatre stage where nothing is real. Its appearance is part of a story, a modern project that began during the Renaissance and that was endorsed by art historians who presented it as progress from primitive obscurantism. As a result, persepective, with is a mathematical representation of space, has been inscribed as part of a temporal project that replaces theological art turned towards God with a teleological art that considers ultimate finality and where everything belongs in a system of relationships that lead to a historical destination. Perspective nods to a world to be realised rather than a reality to be enjoyed.

Nota Bene: Pavel Alexandrovitch Florenski (1882-1937) was a theologian, philosopher, mathematician, inventor and priest. His genius, universal knowledge and passion caused him to be compared to Pascal and Vinci by his contemporaries. He died a martyr of the Stalinist regime, condemned to the Gulag and subsequently executed. 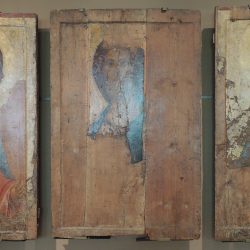 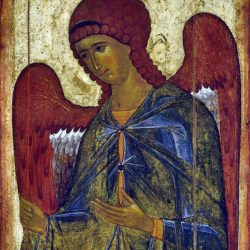 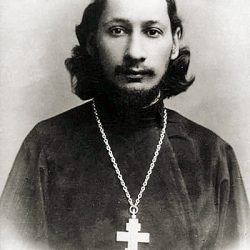