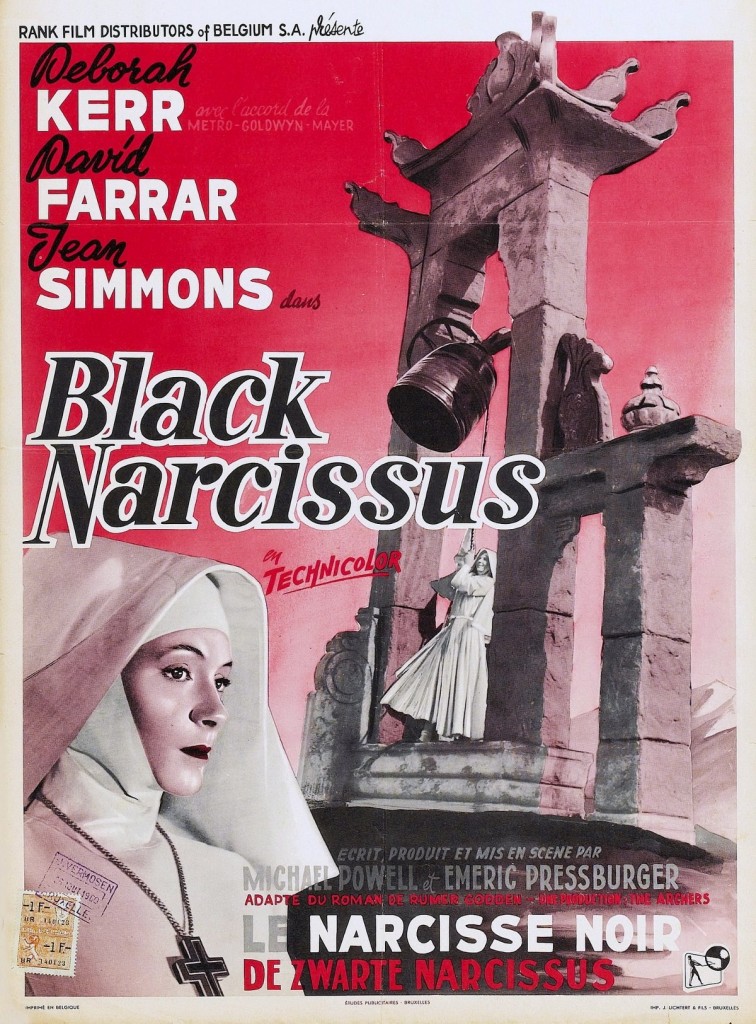 From its windy, cliff top heights, this Nepalese palace, an abandoned, isolated and desolate former seraglio, provokes flashbacks like bellows accelerating a fire… The embers of the subconscious glow bright here. The five nuns who founded their convent in this building simply had to succumb to their surroundings.

Black Narcissus is a 1947 film by producer-director team Michael Powell and Emeric Pressburger. It bagged an Oscar and a Golden Globe award for Best Cinematography (Jack Cardiff) and an Oscar for Best Art Direction (Alfred Junge) in 1948.

The genius of an artist is being able to enhance the subject by the most appropriate aesthetics possible. The story of Black Narcissus involves the establishment of a mission in an isolated location in the Himalayan mountains by inexperienced nuns with no knowledge of local culture who are forced to collaborate with the local representative of the British Empire – a man whose laid-back charm and male virility soon starts to stir up trouble. But the theme of this piece of work is the nuns’ repressed, inner turmoil; the torment of the past, vows that begin to bug, the lure of temptation… Also the visual aesthetics in this film are not a realistic representation of the location because the underlying theme – the genuine scenery – is the psyche. And subsequently Black Narcissus comes across as more of a dream that has been filmed.

The wonder of this great film is its absolute artificiality. Framing, cutting, narration, visual imagery – including make up! – all make full use of the language of film. Practically the whole film was shot at Pinewood Studios in England, on a set angled at 35° to guarantee light continuity during filming. This strategy was inspired by the luminosity in art by Vermeer, Caravaggio and Rembrandt. Poppa Day, who was the big whiz at photographic trickery back in the day – and who worked alongside illusionist/filmmaker Méliès in 1905, designed artwork on glass which was incorporated in general shots. Everything is fake; reality but with knobs on. The acting is also over the top. The final scene between the two enemy nuns, like two sides of the same soul, meeting at the edge of the abyss, was choreographed and timed from a partition then acted to the tempo of piano chords – before being subsequently orchestrated by Brian Easdale. The supreme command of technicolour also leads to the birth of a film that draws its lifeblood from silent movies and Expressionism. Black Narcissus leaves a lasting visual impression on the mind.

The title of the film comes from the name of the 1911 perfume Black Narcissus by the House of Caron. Worn by the young prince wanting to be taught by the nuns, it stirs up memories of the time before they made their vows… This prestigious perfume was also worn by Yves Coueslant’s mother during his childhood in Vietnam, a scent that in his eyes seemed to surround her like an intoxicating halo. It seems obvious therefore that a tribute to this visual cinematic gem should be linked to the evocative harmonics of memento.