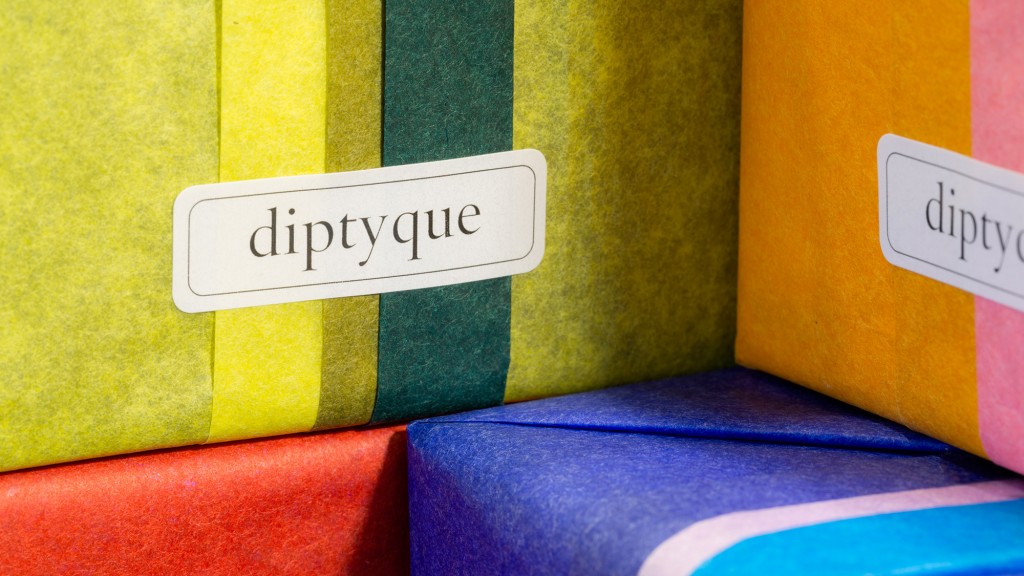 It’s about laying out silk papers, about meticulous folding, about color scheme combinations. It could be an arbitrary theory of synesthesia or a formality, so the laying down lay-out for wrapping the gift cases at diptyque goes.

Take turquoise blue with fuchsia and jade green – that only applies to L’Ombre dans l’Eau in eau de toilette because the version in eau de parfum (perfumed water) always is in black keeping the three colors in front strips. This goes for every fragrance – each and every eau de toilette has a three color scheme with black added for the corresponding eau de parfum which always distinguishes itself everywhere in the world, although only by diptyque. The same for a three color combination of silk paper to identify every white candle and four colors for those in a blown glass, each scent has its trio of colors, sometimes a quartet. These wrappings of colorful paper act as a polychrome setting to the black and white labels that have been identifying diptyque since its debut. The silk palette has thirty one colors, giving billions of possible combinations.

But colors are nothing without folding – three or four papers are arranged in such a way that the first color wraps the box, leaving the other two displayed in two vertical strips in front, the second narrow, the third large. This folding technique is a Japanese inspiration. An example in mind is Philosykos – a wine-lees color wraps the box, then solferino for a narrow strip and apple green a large one. Only with the eau de toilette! As for the eau de parfum version, solferino and green apple colors stay alike but wine-lees gets reduced to a medium large strip next to the solferino narrow one while the black silk paper covers the perfume bottle box. These clear-cut categorical paper-foldings were also thought of in such a way that only a very little piece of adhesive is needed to hold everything together.

These type of gift wrappings are an exclusive service offered by diptyque boutiques only. The tradition was initiated by the founders in the boutique at 34 boulevard Saint-Germain. A color table was then created that has been unwaveringly growing ever since along with diptyque’s offer, which not only applies to the vinegars, eau de toilettes, eau de parfums and candles, but also to the body fragrances of l’Art du Soin (body and face), the house fragrances, La Collection 34 and accessories. These combinations of tones owe nothing to the scientific work of Michel-Eugène Chevreul’s law of simultaneous colour contrast, however their system has no other aim but to please because this ceremonial treat belongs to diptyque etiquette.