Synaesthesia, the association of sound with colour, has assisted many a great composer. Some of the individuals listed below engaged in a synaesthetic approach to the arts, revealing the extent to which their perceptions of sound and colour have given direction to their inspirational flow.

Master of the Chapel at Weimar, Franz Liszt (1811-1886) addressed the orchestra with the following words regarding one of his works: « Gentlemen, please, a little more blue! This shade is required! » and: « This is a deep purple, please, keep that in mind, less pink! » Unfortunately there isn’t a photo to corroborate the stiff scepticism that must have passed over the obligatorily impassive faces of the musicians.

Nicolai Rimsky-Korsakov (1844-1908) saw his compositions in colour. For him, C major was white; B major a sad, deep blue with glints of steel.

He had a difference of opinion about the colour of E flat major with his friend Alexander Scriabin (1872-1915), which he saw as another playful shade of blue, whereas Scriabin experienced it as a reddy purple, and D major as golden brown. The symbolist and spiritualist Scriabin began to stage his synaesthetic perceptions by projecting the colour in tune with the notes or tones being played.

The synaesthesia of Jean Sibelius (1865-1957) was unusual in that it went in both directions, the sounds produced colours, but colours also generated sound.

When Olivier Messiaen (1908-1992) composed pieces like « Exotic birds », « The Ascension » and « Colours of the Celestial City » he endeavoured to write the score using the texture of the chords made by the instruments playing together as well as colour combinations, blending them harmoniously together.

György Ligeti (1923-2006) saw letters as colours, saying one day « I don’t have perfect pitch. So, when I say that C minor is a rust colour, a reddy brown, or that D minor is brown, this doesn’t come from pitch but from the letters C and D » (Do and Re corresponding to C and D in international musical notation).

Duke Ellington (1899-1974) had a particularly refined sense of synaesthesia that was part of his genius for composition and orchestration. His scores took into account sound on the one hand but also the unique input of every musician involved in playing his pieces (and how many of them didn’t play in his band over the course of the century!): « I hear a note played by a member of the orchestra that corresponds to a colour. I hear the same note played by a different musician and it’s a different colour. If the note being played is sustained I see the same colour but perceive texture. If Harry Carney is playing the note, his D is dark blue hessian. If Johnny Hodges is playing, his G is pale satiny blue. »

We round off with this example: painter David Hockney, born in 1937 didn’t use a synaesthetic approach when painting his pictures but conversely he used it when designing sets and costumes for the opera, reproducing the colours and lighting density in tune with the soundscape of the music. He did this for Richard Strauss’s opera (with Maeterlinck) Die Frau ohne Schatten [The woman without a shadow] in Covent Garden in 1992.

The ability to combine the senses is a skill shared by all but one that most people can no longer tune in to. Amongst the few who can still access these sensory fields that culture presents as set in stone there are a few even rarer beings that stand out as geniuses. Hopefully their colourful scores and palettes of notes nod to this fact. Perhaps they can teach us to listen and ponder together. 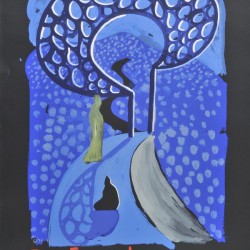