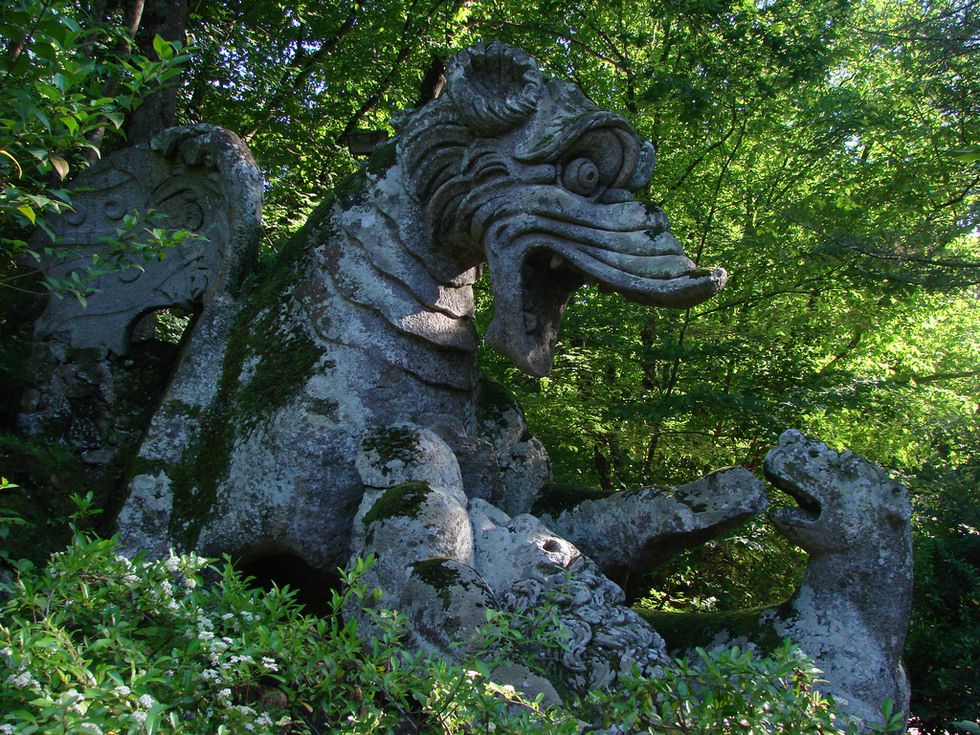 Monstruous fantasy? Princely diversion? Mannerist meanderings? An alchemical parable? The Gardens of Bomarzo, which were abandonned for centuries, disclose monsters sculpted from volcanic stone that refute reason and dare fear.

The garden is situated in a wood in a valley bottom overlooked by a castle in the province of Viterbe and is populated by huge mythological sculptures that rise up from the undergrowth like a living nightmare. The castle belongs to the aristocratic Orsini family who included condottiers and family links to the Pope; this garden with its petrified giants, aptly dubbed the Park of Monsters, was dreamt up by great condottier Pier Francesco « Vicino » Orsini (~1523-1585), and implemented by architect Pirro Ligorio (~1510-1583) and the sculptures were allegedly the work of Simone Moschino (1533-1610). His gardens, which were created from 1550 to 1585 or 88 fell under the European Mannerist movement that prolonged and unravelled the rational humanism of the Italian Renaissance.

This strange garden, also dubbed the Sacred Grove, only seems to have used symbols and disproportion from the Mannerist movement (the latter originating from the word « maniera » in Italian, in the sense of « in the manner » of Raphaël or Michaelangelo, two titans of art in their time). It is therefore formally differentiated from it. This is particularly evident when the garden is compared to Italian gardens of that time with their classical terraces and pleasant water features.

Here the paths dotted with thirty monstrous sculptures are reminiscent of a journey into the mysteries of antiquity featuring Proteus, Hercules, Pegasus, a dragon and the Mouth of Hell… A gaping mouth seems to await the tortoise and the Orsini coat of arms… A leaning house seems to represent the then divided Church… Each statue houses a sibylline inscription, a warning to the viewer of old but now mainly eroded and illegible. For art historians, this expressive statuary is reminiscent of Etruscan art – the Etruscans having previously settled in the region – or of grimacing Oriental art… As the paths wind through the woods, and the monsters rear up to astonish the senses of visitors and prod their minds with allegorical references, walkers are guided to a clearing where a classical temple is dedicated to the Prince’s beloved – as well as to the alchemical wife Sophia, wisdom crowing the spiritual quest.

This wild garden that is home to these dangerous gods that must be faced in order for a person to evolve is an exuberant proclamation of Baroque art. But by the time the latter came in to play, nature had smothered the garden’s scary inhabitants and the park would remain neglected until the 20th century.

Some great artists have wandered around these gardens including Claude Lorrain (~1600/1682) and Johann Wolfgang von Goethe (1749-1832). The resurrection of the park however has been attributed to the presence of Salvador Dali as the surreal nature of the park clearly resonated with him. Filmmaker Michelangelo Antonioni made a short documentary about it; Manuel Mujica Lainez and André-Pieyre de Mandiargues wrote essays about it and Alberto Ginastera created a dodecaphonic opera about it. Niki de Saint-Phalle was openly inspired by it for his ‘Grande Papesse’ statue and Tarot gardens and the creatures of Bomarzo, photographed by Herbert List and Brassaï, would regularly make cameo appearances in a variety of films.

The scattering of images removes the mystery, sends the spirits in flight and prohibits the effect of discovery which remains illicit. We should be able to forget what we have seen, starting by what we have read, in order to let this nightmarish circus incite visitors to conquer their own supernatural gardens. 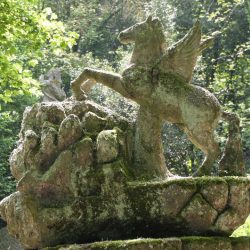 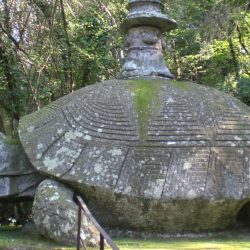 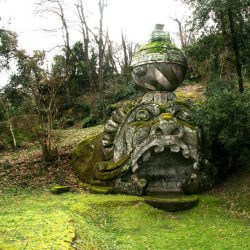