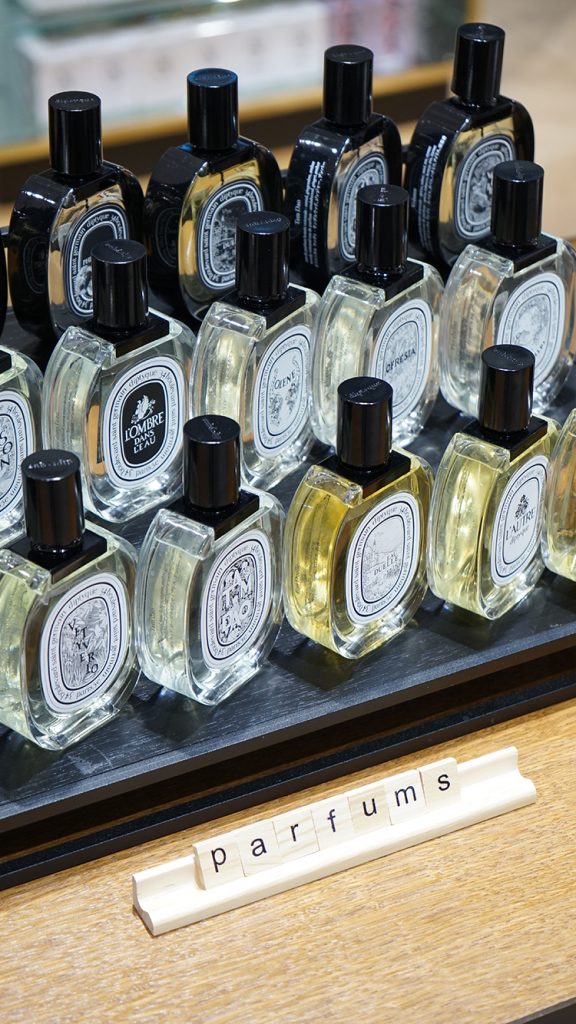 The story of diptyque is the fruit of an alliance of trust. Its core was the friendship between its three founders. Naturally, they caused diptyque to expand by forming long, faithful bonds. Professional friendships with perfumers or « noses » are therefore at the heart of this company’s history…

It will soon be 50 years since L’Eau (1968) and diptyque’s water based fragrances (eau de toilette and eau de parfum), and yet, only six perfumers have collaborated with the House to develop each « juice », a common term used to refer to the alcohol based solution of a perfume concentrate. Only one of these collaborators, Cécile Maton, the last to partner up with diptyque, has not known at least one of the three founders, all of whom are dearly departed but whose earthly sojourn is eternalised somewhat in the spirit of diptyque which endures in the scents that the House continues to create. diptyque is all about lineage and concord.

Each diptyque fragrance has been created by four noses: two at the cornerstone of the House – firstly Desmond Knox-Leet, then after his death Yves Coueslant and Christiane Montadre-Gautrot, and after their demise, Myriam Badault, Product Creation Director in partnership with a nose technician, the perfumer often delegated the job by a perfume manufacturer. An ordinary relationship between customer and supplier would never have given rise to such an extraordinary delivery. On the contrary, there was always a creative intelligence, a dialogue of discovery and of pushing the boundaries of each individual; the long and adventurous team work required to chase the imaginary perfumed butterfly. The springboard for a diptyque olfactory accord is harmony between people. diptyque perfumes are rooted in trust, collusion, loyalty and connection.

Desmond Knox-Leet worked at length with Serge Kalouguine from Fragonard. He suggested a poetic idea with a few fragrant supports that the latter interpreted, and the diplomatic to-ing and fro-ing process between the two partners, tweaking amounts of ingredients, continued until they both agreed that the right olfactory structure had been achieved – which often went beyond their original idea, surprising them by their length of their exchanges and the happy olfactory accidents that had surfaced as a result of their noses. This would always be par for the course from that moment on.

There then followed Norbert Bijaoui, Olivia Giacobetti, Fabrice Pellegrin, Olivier Pescheux, and finally Cécile Maton. Each new idea for a perfume from diptyque must be matched to a good nose, who, by means of affinities, the raw materials used, the character of the creative spirit, is best placed to interpret and serve the olfactive drawing that has barely been sketched. These days diptyque has perfume technology that was not available to its predecessors hence they were guided by good taste and aesthetic intuition. But the olfactory denouement remains the same: a common language that allows the sensitivity of each person to be shared. Developing a scent takes time, much experimentation and periods of crystallisation, maturation, doubt, reflection… It’s a long road from olfactory challenge to fragrant exaltation. Interpreting a scent during the creative process is not easy and knowing how to express one’s feelings to perfect it is even harder. So mutual trust in the relationship is paramount.

In this sense, diptyque is perhaps the only place in this world where one can be nose-to-nose with someone yet still be looking in the same direction.  In the same way that it’s a good pointer when someone doesn’t get up your nose.