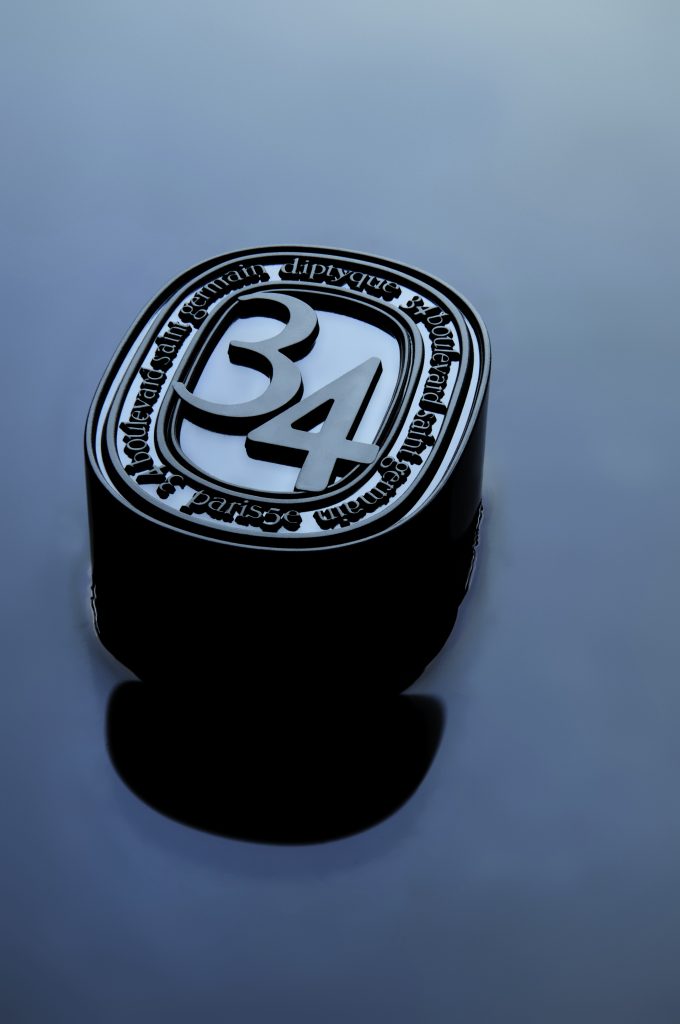 The perfume 34 boulevard saint germain was a perfume from the historical diptyque store. The space was bursting with invisible wafts of scent hanging weightlessly in the air. This was its story recorded as immaterial alluvium. Capturing this romantic idea in a bottle was a technological hurdle.

Back in 2007, ideas were on a roll: diptyque was about to celebrate its fiftieth anniversary in 2011 and a perfume was needed to mark this fabulous event.  Born from a dream, the notion of a store perfume was a figment of the imagination. It quickly revealed itself to be somewhat of a challenge.
The happy Nose that created this fragrance was Olivier Pescheux, but the man of the moment who made the challenge achievable was Dr Roman Kaiser. This famous chemist from the research department at the Givaudan group had pioneered the so-called « head space » technique to capture volatile, subtle and fleeting scents, especially those emitted by rare flowers that are difficult to access. A glass dome is placed over the plant and is filled with an inert gas so that odour compounds are removed and captured in a fatty polymer (a kind of technological equivalent to the cold enfleurage technique used in the olden days). The process was time consuming. Samples are then subjected to high precision sequencing by means of gas chromatography (to separate the sampled molecules), followed by mass spectroscopy (to calibrate the proportions of each extracted molecule). These processes allow a molecular identity to be profiled, which is then synthesised.

The « head space » process led scent molecule chaser Roman Kaiser to many hard to reach places in search of endangered floral species. The Amazon, Papua New Guinea, high altitude Alps…the scientist engaged in « scent treks », long expeditions on the hunt for scents. Trying to capture the scent of the diptyque boutique was a totally new olfactory challenge. Access, naturally, was a piece of cake. But how to seal the shop under a glass dome? The place was awash with scent: hovering, undulating, agile molecular wafts with a never ending sillage. He had to carry out several encapsulation processes, investigating every nook and cranny and scent family. This was back in 2008. Once scents had been captured and synthesised, Kaizer then passed the baton from the hand to the nose: Olivier Pescheux would subsequently toil for two years to transform this unique raw material into a perfume that would express the character, a way of doing things, a story of the house of diptyque. This perfume would also be used to scent a body care range.

A clever deconstruction born from a capricious idea, the perfume 34 boulevard saint germain was then sold in the boutique at that address – alongside all the others, in 2011, the fiftieth anniversary of the spirit of diptyque spirit and the year the packaging echoed the oval dome shape of the cloche in its bottle. And that’s how the fragrance of a place and a perfume house was worn and experienced around the world, by many individuals and declined in so many personalities. This story of a history that could be in everyone’s life story seems like a fairytale, but dispenses the essence of truth.

Nota Bene: Roman Kaiser was awarded the Roche Research Prize in 1988. He has been a doctor Honoris Causa in natural sciences at ETH in Zurich since 1995. He involves local communities as much as he can in his work and redirects part of his sponsors’ budgets to that effect. He has published many scientific articles and books for the general public on the topic of orchids; endangered species and the most well known scents in the world and their connection with biology, history and culture.