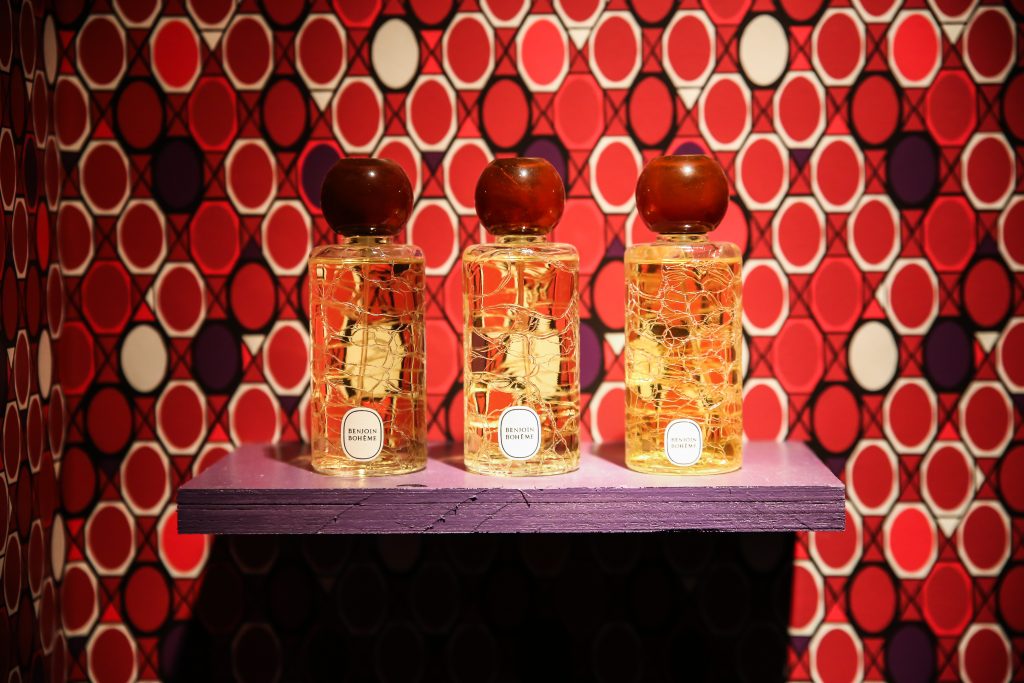 The story of Benjoin Bohème, an eau de parfum in Les Exclusives du 34 collection, is a very interesting example of the creative journey chosen by diptyque. Its sillage can be lingering and slow because there is dialogue, digression, crossed paths, audacity and conviction.

Inventing a perfume in which each ingredient plays a crucial part in an accord that has, of course, a positive yet original olfactive structure in the noble sense of the word – meaning it does not imitate anything else, nor follow a set formula, it is just the olfactory expression of an idea, feeling or imagined landscape – well, that takes time. Years even. And the time spent by the « nose» in dialogue and experimentation with his associate from the House is based on trust, shared faith, professionalism, and an expressive friendship. This is more than an instruction: it is a shared goal between professionals who respect and appreciate each other, who love diptyque; understand the spirit of the brand and want to serve and honour their profession by enjoying the role of play in proceedings.

The development of the 34 boulevard Saint Germain perfume was a technical challenge. The main idea was to create an eau de toilette that would capture the olfactory soul of the diptyque shop, a space imbued with half a century of fragrances. The air here contained the invisible history of the House. It was a technological hurdle. The first method was the methodical encapsulation of each nook and cranny using the « head space » technique. Turning these captured samples into a perfume then became a task that went on for many long months.

As usual, this period involved a rich exchange between diptyque and Olivier Pescheux, the « nose » entrusted with the job. The discussions led to a challenge for both, more on an imaginative level than a technical level, as they were creating a perfume that would be a perfect fit for the imaginary tenant at 34 boulevard Saint Germain. Fun was discussing what this person would look like – an aesthete, a traveller, groomed, cultured, unique and (unsurprisingly) refined. Then the time came for this picture to be transformed into a perfume. Personality traits had to match raw materials. The latter included amber, spices and in particular benzoin. The face of the tenant gradually took olfactory shape; the perfume’s accord was gaining its structure. However it was still missing that je-ne-sais-quoi to make it the perfect representation of this fictitious person. Many attempts failed to hit the bull’s-eye. For several years the fragrance remained unfinished, waiting for that elusive ingredient that would be greater than the sum of all its parts.

One day, during a discussion about something and nothing, Olivier Pescheux told Myriam Badault, the Product Creation Director at diptyque and the perfumer’s associate about a new method for extracting patchouli – called fractionation – that would give the substance more power and finesse. So she suggested that they test the addition of this to the benzoin-orientated, unfinished perfume. And why not? Such was their mindset. Suddenly, the blurred features of the tenant at 34 bd saint germain became clear: this patchouli became the nose in the middle of the face. The perfume’s accord now took deep breaths. The decisive missing link came about by accident. But the latter had its roots in patience and collusion. Benjoin Bohème had finally arrived!

This example illustrates a kind of serendipity, a word that in science means an accidental discovery, often stumbled across when researching something else. It is also an opportunity to make a distinction between chance and luck. The former happens without reason. The other is sought, makes choices and wins. It was the relationship chosen between two professionals who knew each other, who liked each other, and who made demands of each other, that allowed a happy accident to occur one day in the unexpected form of patchouli.