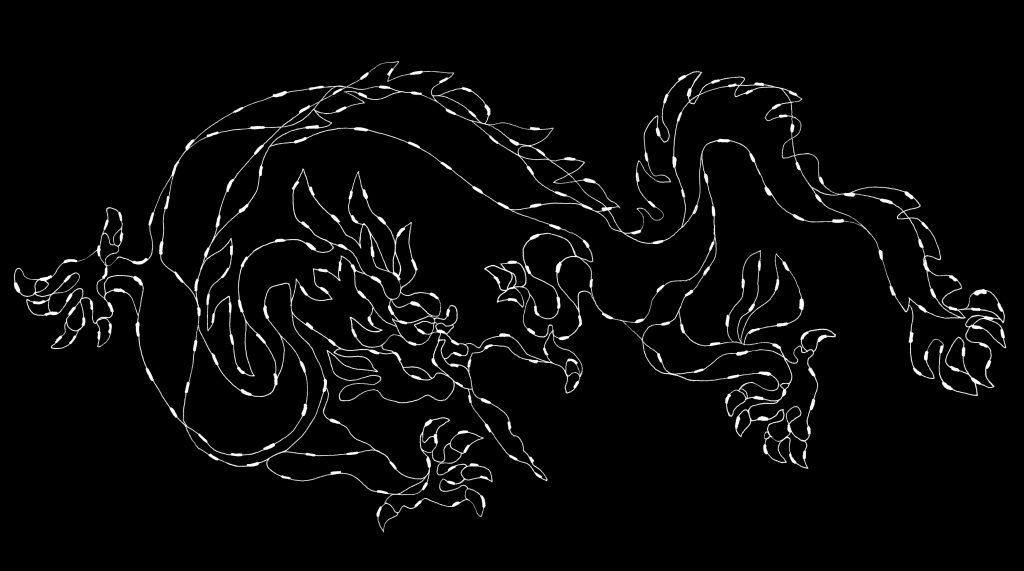 Eltanin and Rastaban are his eyes, flickering in the darkness, with Grumium and Nul drawing the outline of his face in stars. Then, winding round the stars Altai, Chi, Zet, The, Edasich, Thuban and Kap, the twisting body of the stellar monster the Dragon emerges.

Thuban, the Arabic word for dragon, was a former pole star honoured by a cult in the ancient Egyptian civilisation, with many cultural buildings geometrically aligned in its direction. It is a binary star located 300 light years from the sun and as many times brighter than the latter. Changes in the axis of rotation of the earth have since displaced the point of projection of polar north to Alpha Ursae Minoris in the Little Bear, endorsing it for a time with polar star status. Eltanin, the western eye of the constellation, or γ Draconis to give it its proper name, is the most brilliant star in the Dragon constellation. An orange giant star 600 times brighter than the sun and approximately 150 light years from it, it will graze our solar system of less than 30 light years in 1.5 million years. The other eye Rastaban (or β Draconis ), a distortion of Ras al Thuban, the head of the Dragon in Arabic, is a giant star 40 times larger than the sun and 400 light years away. The Dragon constellation has a third eye: the Cat’s Eye nebula affectionately dubbed NGC 6543.
Among its 217 visible stars, Mu, or Alrakis, Nu, Omicron and Psi, under the common name of Draconis, are binary stars, and 39 Draconis is a triple star with a complex shape due to gravitational interactions. But above all, the Dragon is host to Kepler-10, a yellow dwarf similar to the sun, whose planetary system includes exoplanet Kepler-10b, the smallest known super-earth outside the solar system.
The Dragon is not short of galaxies including spiral galaxy NGC 5866. And the most distant object is a Quasar, a quasi-stellar light source located 7 billion light years away – including leap years.

We don’t really know which dragon’s infinite silhouette dazzles in this galactic vault. The creature is a universal archetype. We assume it has a Greek ancestor, but which one? There were so many, including Python, the Lernaean Hydra, the Colchian dragon, the dragon of Thebes… it might even be Ladon, charged by Hera to guard the golden apples in the Garden of the Hesperides and killed by Hercules. Hera would have hung the spoils in heaven to honour him with gratitude. Now the constellation of the Serpent could be Ladon! It could even be Zeus himself, in disguise between his two wet nurses, Little Bear and Big Bear…