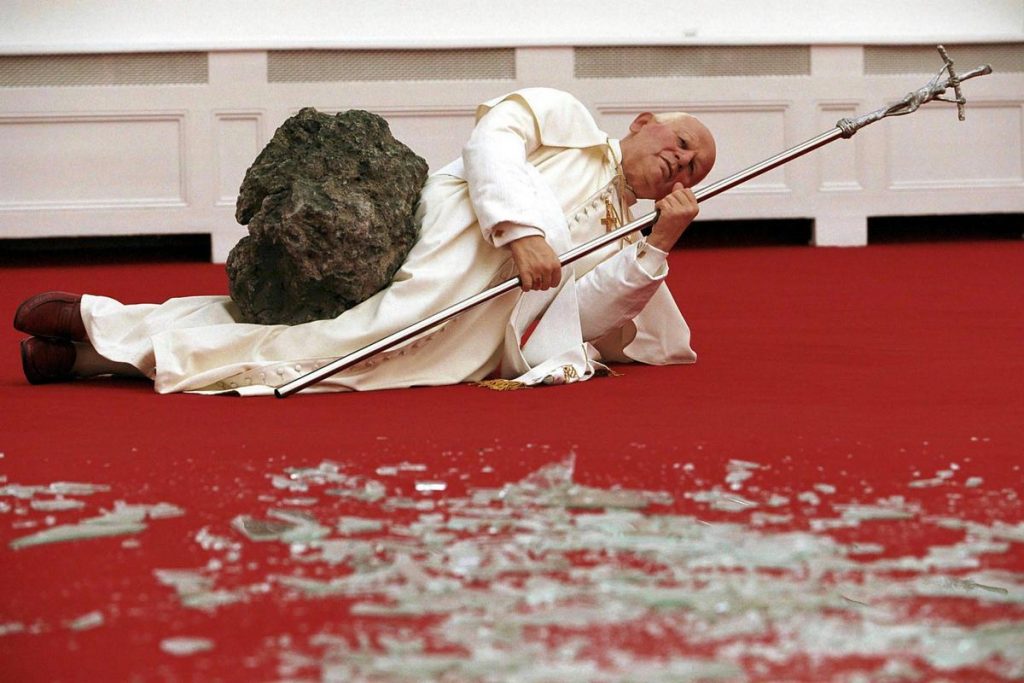 Some images encrust themselves forever in the retina, outstripping the specific context in which they appeared in the public domain and entering collective visual memory. Some works of art have acquired this particular status over the centuries, especially those that have been difficult to understand or made people feel uncomfortable or caused a scandal. Along with sex, religion is probably a topic that triggers controversy the most: current news may well be focusing on Islam but the history of Christianity is also peppered with scandal. Outrage caused by the trials of Veronese and Caravaggio by the Courts of the Inquisition over their paintings; strong feelings aroused in the Sixties by Jacques Rivette’s La Religieuse (The Nun) and Pier Paolo Pasolini’s short film La Ricotta (Curd Cheese) as well as photographer Andres Serrano’s Piss Christ (1987), which was vandalised during an exhibition of the Lambert collection at Avignon, are all testament to this.

La Nona Ora joins the above. Created in 1999 by the enfant terrible of modern art Maurizio Cattelan, this installation showcases Pope Jean Paul II as an ultra-realistic, life-size wax figure struck down by a meteor. He lies on the ground (on a vast red carpet) in his white cassock, face clenched with pain and hands clutching the Papal Cross. Scattered around him are shards of glass, demonstrating the violence of the event that has just occurred. The title of this work nods to a verse in the bible relating to the death of Christ on the cross, riddled with doubt as the weight of the world’s sin overwhelms him: « And by the ninth hour, Jesus cried out: Eli, Eli, lama sabachthani? meaning: My God, my God, why hast thou forsaken me? » (Matthew 27:46).

So what is La Nona Ora all about? Does the meteor represent the weight of sin that bowed Jesus’ body and now crushes the Pope, underlining the humanity of the Sovereign Pontiff? This is what Cattelan implied when he said of his work: « I don’t see a man who has failed, rather a man who is suffering. A man who carries a burden on his shoulders on behalf of all mankind ». Or perhaps there is a more pernicious interpretation. Maybe the artist is making a dig by showing the Pope’s authority crushed by this grotesque event? Probably both.

And this is the power of La Nona Ora, whose subject matter crystallises some of the taboos in contemporary society by staging the tension between the sacred and the profane; power and vulnerability in such a visually spectacular way. The very diffusion of this piece of work – its acquisition by collector François Pinault in 2001 only two years after its creation and for megabucks at the time; the ever turbulent context of the exhibitions in which it has featured; and the quantity of ink split by commentators within its short life – all of these factors nourish its controversial aspect. Deep down, La Nona Ora questions the role of the artist in society and questions the limits of irreverence and transgression in a world in which freedom has been elevated to sacred status. This piece of work packs a punch and recalls the words of René Char: « What comes into the world and disturbs nothing deserves neither consideration nor patience ».