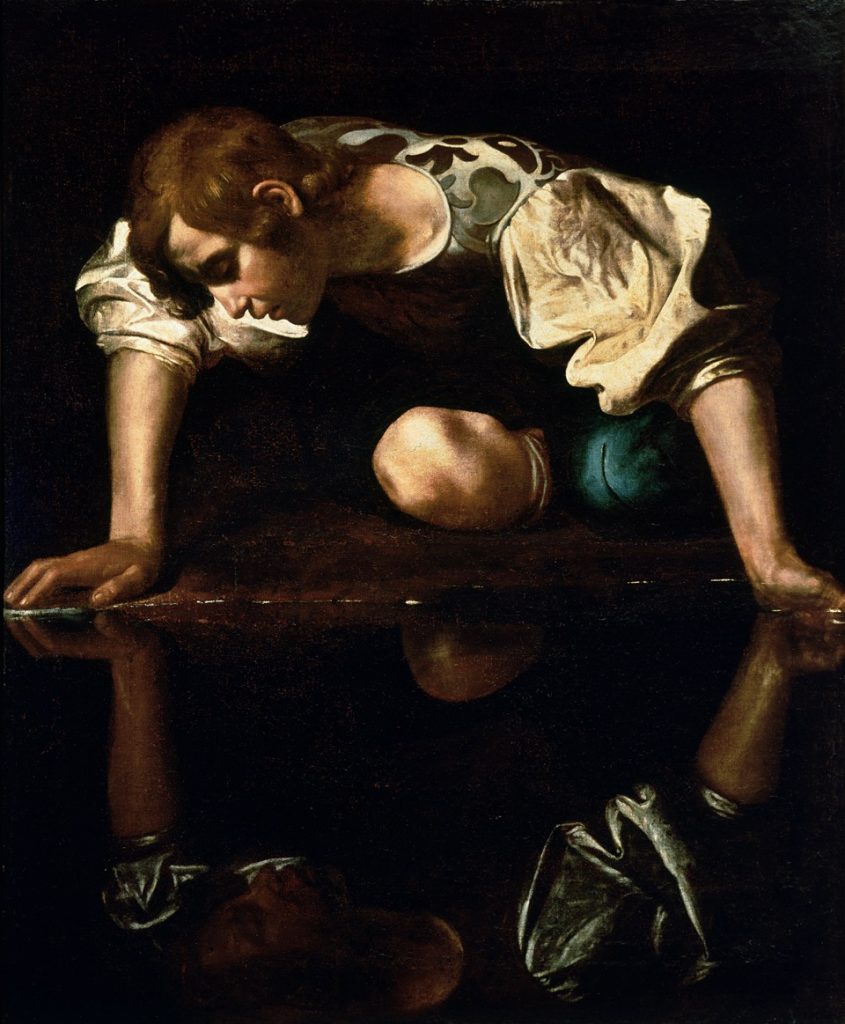 Mirror on Narcissus, by Soko Phay

Narcissism is currently understood to mean an excessive self-love. But we must be careful not to cut the word short. The Greek myth that inspired Freud actually embodies a paradox: the beautiful youth Narcissus who rejected all suitors including beautiful nymph Echo grew up without ever having seen a mirror! Didn’t the prophet Tiresias in Ovid’s Metamorphoses warn his parents at his birth that: « he will live as long as he doesn’t see himself »?

Caravaggio packed a punch when he drew the fatal moment when the young hero, down on his knees and leaning over the water with outstretched arms, gazes with delight at the fabulous beauty of his reflection in the gleaming water below. The powerful interplay of chiaroscuro peculiar to Caravaggio’s modernity as an artist intensifies the downward spiral that lies ahead: when seeing his face for the first time (the first and last time he will come face to face with himself) the young Narcissus becomes aware of his doomed love. Condemned to never being able to embrace his beloved, he desperately tries to maintain the magic of illusion. He feels compelled to gaze at himself again…and again…even to the point of madness and death, as he is unable to become at one with his own reflection.

Narcissus wastes away and his body turns into a « golden flower of crowned alabaster leaves ». Even when he reaches the resting place of the dead, he is locked in a circle with his reflection in the shimmering waters of the Styx. Death therefore brings no relief. Condemned by the Gods to enclose his identity, he dies because he cannot make the initial separation that would have permitted him to encounter the Other. In a way, Ovid’s fable echoes the ethics of Levinas, who urges us to see life as investing in Otherness, committing to our responsibility in the face of another and enjoying the gift of vulnerability. Every quest for identity comes via the recognition of oneself and of others.