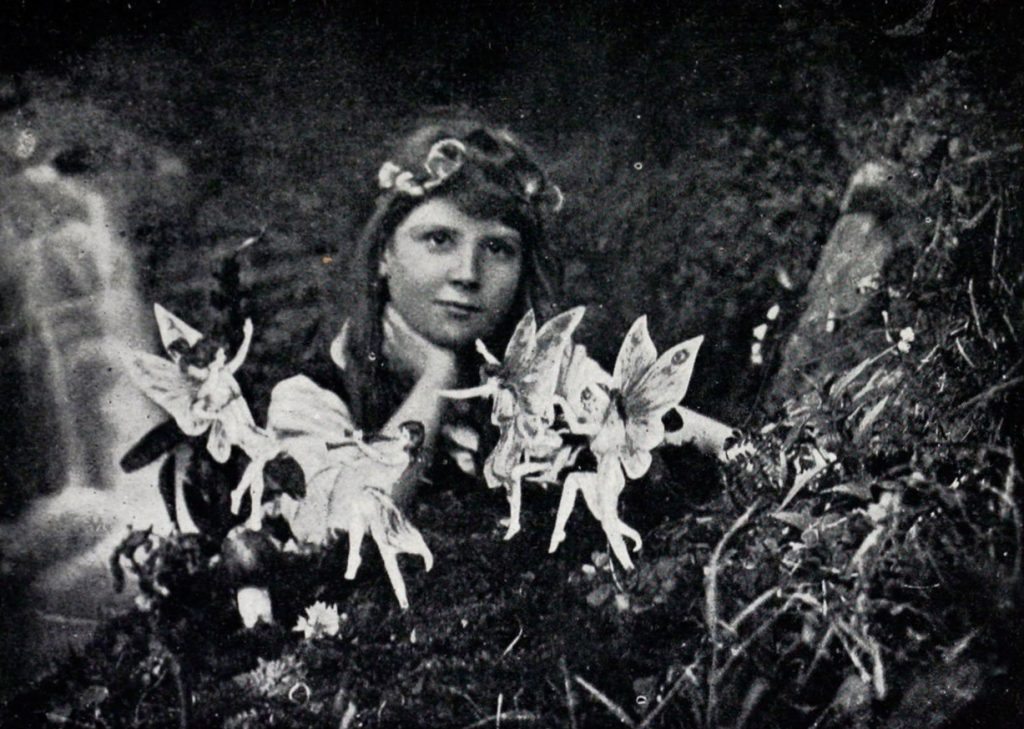 Photography is a frequent and beloved topic for us at memento. Fairies though are far rarer, as is their nature. But their appearance in the tale Une nuit chez diptyque prompts a reunion of these two themes in the story of the Cottingley fairies…

There was a great buzz about the Cottingley fairies back in the day. They stirred up a lot of conflicting and rather confused disputes in the UK between 1920 and 1922, generating broadcasts, expert opinion, counter analysis and nebulous confessions right up until the 80s! The stakes were small but packed a punch: were the fairies and the indubitable gnome photographed by Frances Griffiths and Elsie Wright in 1917 and 1920 in the woods at Cottingley village in West Yorkshire actually real?

This story has been well documented and is too long for us to go into all the details. Nevertheless, in July and September 1917, Frances Griffiths aged ten, and her sixteen year old Elsie Wright took some photos using Elsie’s father, Arthur Wright’s camera. An amateur photographer with his own darkroom, the photos revealed beautiful tiny fairies dancing around Frances. Although it looked like a prank, Polly, Elsie’s mum, believed the photographs to be authentic. The children believed in the « little people » that regularly featured in the beliefs and folklore of this region of Yorkshire. In fact, fairies were well established in the rural imagination of the area. But as the fame of these photographs spread, fact and fairy fiction were to come to a head.

The story gathered momentum and Sir Arthur Conan Doyle became involved. The world renowned author and creator of the detective Sherlock Holmes applied his powers of unbiased, deductive, logic to the matter and concluded that the photographs were real and that the girls were honest. It was their innocent belief in fairies that had encouraged the fairies to materialise in front of the lens. He got Edward L. Gardner, an eminent speaker at the Theosophical Society to bring the matter into the open so that the facts could be examined impartially. A lot of people got involved in the debate which took place in the press. Three photographic experts agreed that what was visible in the photo was actually in front of the lens: however, although they couldn’t see any evidence that they had been faked, that did not necessarily mean they had not been rigged.  New prints were taken. Doyle wrote to the cousins, who were most impressed to get his letter, and then he went to visit them. They were asked to take more photos, which they did, revealing more festive fairies.

Some truly believed they were real fairies, others thought they were fake. In actual fact they were a hoax, having been cut out of a magazine, with wings added on, and then pinned to a branch or to blades of grass…A childish prank. But the adults did not see it as such, from their very serious vantage point; they took it to the extreme.

So how come? For spiritualists, a generic word that covers disparate beliefs, the photographs proved that the invisible world could manifest itself to pure and innocent souls – affirming that the thousand year old fairytales and the notion of purity and innocence being destroyed by puberty were true. It now seems inconceivable that a belief in the unknown, and in a field that could not be backed scientifically, would extend to the myths of fairies, goblins and gnomes gadding about in the countryside a spit and a hop from city life.

When Elsie was eighty she admitted it was a hoax, but Frances said it was not the case with the fifth photograph…Some people have recently suggested that they had photographed exactly what their psychic powers had allowed them to photograph. In short, fairies are wilful. The moral is that the individual is at first mystified by what he or she has decided to see. You would think that photography would be an undisputable justice of the peace in these matters. But no. Nothing is more deceptive than the image in a photograph, and more so than ever these days. This is what the work of conceptual artist Joan Fontcuberta focuses on – the truthfulness of photography…