Gustave Le Gray (1813-1884) is one of the founding fathers of photography. We are discussing him here because of the uniqueness of his orientalism: whereas his contemporaries dreamed about the Orient without ever setting foot there, he was so enthralled by the place that he stayed there for over twenty years and even died there.

There is some mystery surrounding the circumstances that seem to have led Le Gray towards the port of Alexandria when it wasn’t his original purpose when embarking as Alexandre Dumas’s guest on the latter’s schooner in Marseilles on the 9th May 1860.  And there are just as many question marks around the reasons why he stayed in Egypt from the age of 47 until his death at the age of 71. After all, this man had been the official photographer for Napoleon III and his wife Eugenie, respected and acclaimed by his peers as being a pioneering photographer with an experimental and artistic twist to his work. He seems to have been the plaything of predetermination without cogniscant intent.
Emma, Dumas’s boat, was supposed to be going to Genoa. He veered off to Sicily to meet up with the revolutionary Guiseppe Garibaldi, the craftsman of Italian unification, whose forces had just taken Palermo. These two unique people would meet in front of the cathedral in the delapidated city. Le Gray photographed Palermo in ruins and took a stunning portrait of Garibaldi.

Noone quite knows what transpired between Dumas and his guests including Le Gray, who were unceremoniously dumped ashore in Malta. Le Gray then set off for Alexandria. He would never return to France. After a trip to Beirut and Baalbek where he fashioned a studio amongst the ruins of the Temple of Jupiter, he headed off to Damascus before returning to live in Alexandria and finally settling down in Cairo in  1864.

He enjoyed renown and an aura of gratitude as a result of his work which created a strange notability in Egypt. He continued to carry out orders for the continent and took care of his business in Cairo. Before long he had officially photographed Ismaël Pacha, the Pasha of Egypt, whom he accompanied on expeditions in the Nile valley and the desert of Sudan. His photographs are the result of the skilled eye of a master, who captured the gravity of beauty without artifice. He would also become the professor of perspective drawing at the preparatory school for the Polytechnic School in Cairo. Finally he seemed to have spent time, perhaps for financial reasons in his old age, doing portraits of locals, which experts see as heralding the photographers of the following century, in that they captured the essence of  unknown people in full-length portaits or head shots.

He lived in two large palatial dwellings in Cairo surrounded by his drawings and photographs. We don’t know if some of the photographs in his last house at 16 Souq al-Zelat street are of him. Might the woman in one of the shots, squatting on the ground in the courtyard doing the washing, be his Greek partner, with whom he had a daughter?

He never saw his French children again, nor the wife he seems to have left behind… And it is likely that the mismanagement of his affairs in France and subsequent debts went some way to explain his exile. The Orient had gripped him. He died in Cairo and his photographs of Egypt, imbued with their imposing brilliance and buoyant mystery constituted his final work, most of which has been scattered, lost or is randomly waiting to be catalogued. 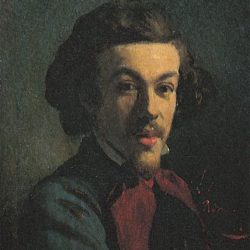 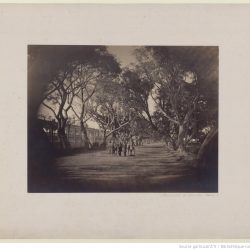 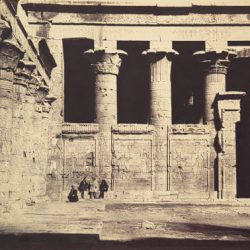 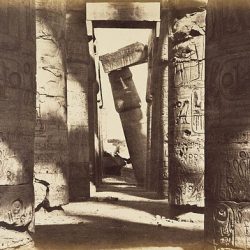