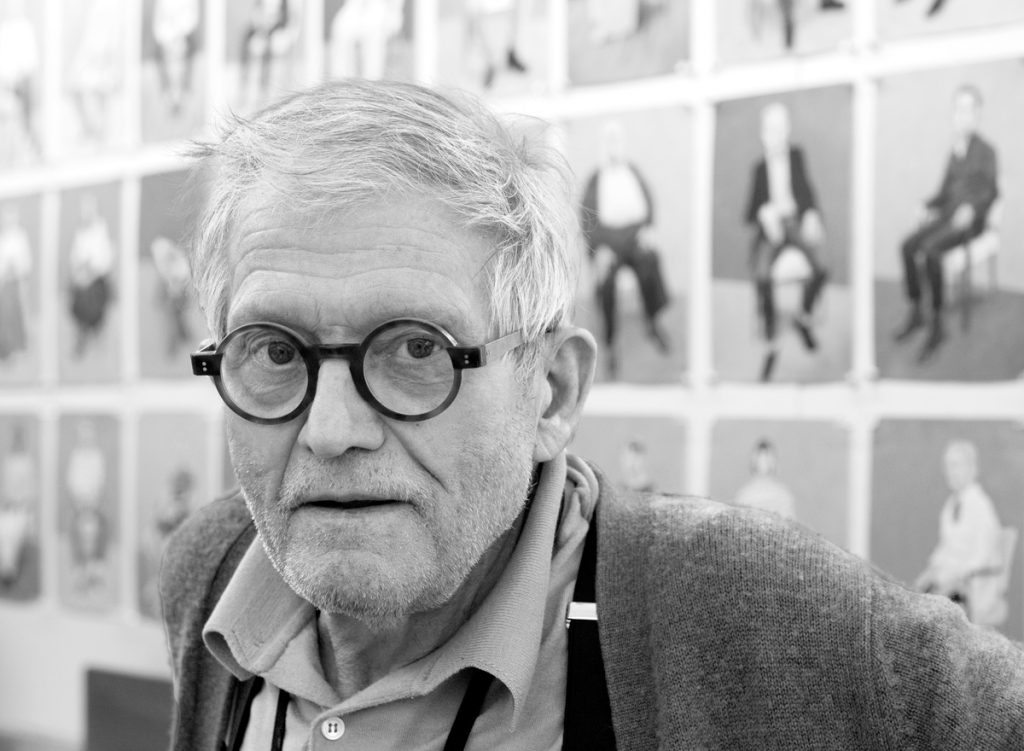 Acknowledged to be one of the most successful and recognisable artists of our time, over the last 60 years Hockney has reinvigorated the role of the representational painter. In doing so, he has produced one of the most exuberant and diverse bodies of work of his generation, continually responding to his surroundings, whether 1960s California or his native Yorkshire landscape, and embracing new forms of picture making from photography to iPad drawings. While frequently incorporating technological progress, a continual thread woven throughout his oeuvre is the call to art history as a means to inform his style, and in no other aspect is this more apparent than in his ground-breaking treatment of perspective.

Graduating from the Royal College of Art in 1962, Hockney alongside his ‘Young Contemporaries’ such as R.B Kitaj and Allen Jones, formed the core of what is now referred to as ‘Brit Pop’. Bursting onto the London scene with his semiautobiographical works including the renowned ‘Love Paintings’, the subsequent decades saw Hockney move between California, London and Paris. During these years he produced iconic works that captured a generation including the seminal Pop Art painting A Bigger Splash (1967).

By the 1970s however works such as Mr and Mrs Clark and Percy (1970-1) saw Hockney releasing himself from his Pop Art label, and striking out on his own unique exploration of how to represent the observable world.  Perennially diverse in his practice, by the following decade Hockney’s gradual fascination with the eye of the camera led him to become fully immersed in photography. Captured by photography, it was with this new working medium that Hockney radically broke with the traditional notion of a single central perspective which had come to dominate Western art since the Renaissance.

“We do not look at the world from a distance; we are in it, and that’s how we feel…I don’t want just to look through keyholes” – David Hockney

While acknowledging art historical innovation, from traditional Chinese landscape painting and the overlapping perspectives, to Cubist such as Paul Cézanne and Pablo Picasso and their flattening of space, Hockney radically revolutionised the flat picture plane and most significantly the viewer’s relationship to it. Working from the principle that the viewer was not located in front of the picture looking through a window or keyhole, but within the plane of the picture, immersed in the scene itself, consciously and simultaneously connecting multiple vantage points. For Hockney the picture was no longer a static window facing the viewer; instead, confronted with multiple entry points the viewer experiences the image in its entirety. The effect is all encompassing.

In works such as The Sea at Malibu, Hockney collapses the pictorial space, and rebuilds it with us, the viewer, immersed at its very centre. With highly expressive brushstrokes the rolling waves beneath his Malibu home seem to leap forth from the picture pane, embracing the viewer in all their force.  A similar effect is achieved with the undulating Yorkshire landscapes, or his deconstruction of the classical still-life. With works such as these it is undeniably apparent that Hockney has created a fundamentally original and beguiling way of viewing pictorial space. With the high anticipated upcoming retrospective set to open at the Tate Britain this year, for the first time since 1988 the public will see first-hand the immense diversity and innovation of his practice.

Tessa Lord is an Associate Specialist from the Post War and Contemporary art department at Christie’s, London.