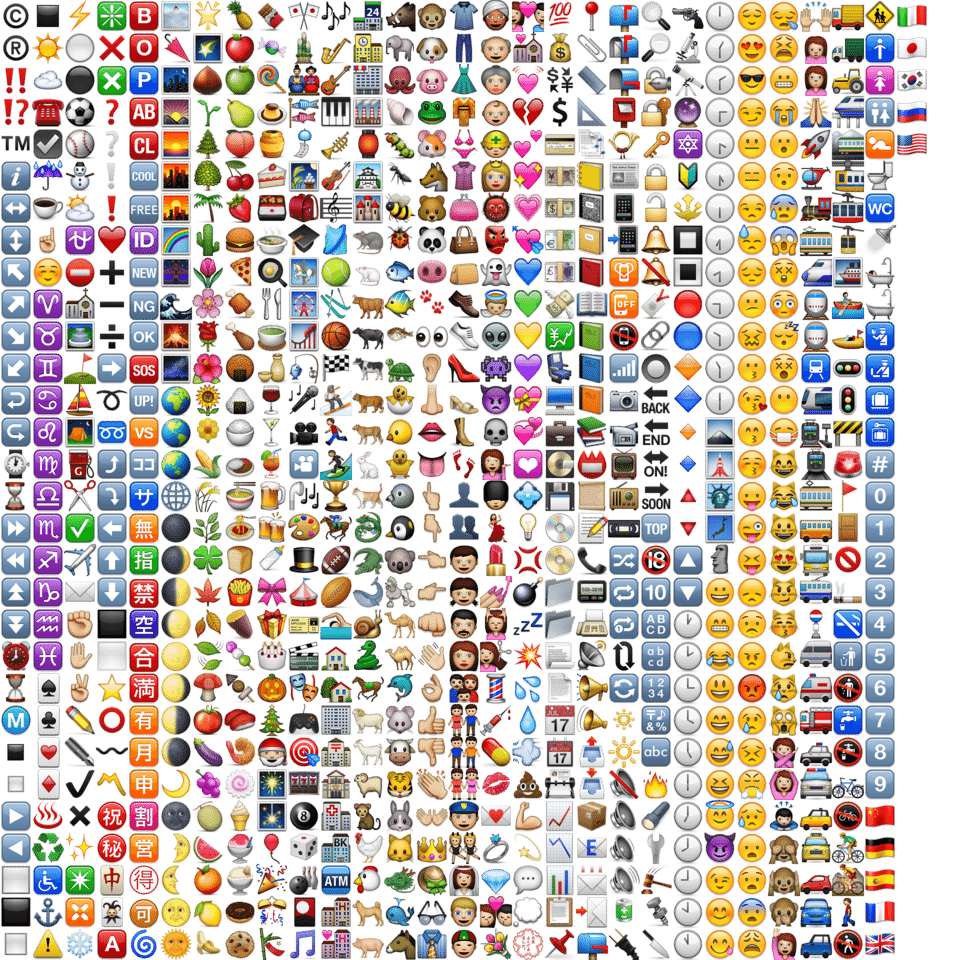 Emojis are ideograms and smileys used in the world of modern digital communication. When Apple introduced them to their mobiles in 2011, they opened the floodgates to something that was far more than just a fad, it was a new mode of expression.

There is written communication and there is spoken communication. And then there is something underneath, lurking in between the lines or in the silences that pepper words. There is information that has not actually been said but which can still be grasped. In these cases, the silences rely on facial expressions or hand and body movements to illustrate the context and make sense of what has not been said. When writing text, the gap is filled by emoticons (emotion + icon): a series of symbols that convey the expression of an emotion. Because the very first emoticon was a smile (discovered in the XIXth century but the first smiley may actually go back to the XVIIth century and to English poet Robert Herrick who appears to use one in his poem To Fortune) the term used to describe it was, quite naturally, smiley (from the English word smile), and came to describe any kind of stylised symbol of emotion, even one that wasn’t smiling, such as 🙁 .

A pictogram is recognisable around the world (signs, labels…). The emoticon is a kind of pictogram that expresses an emotion. Emoji, a Japanese word combining two ideas « e » (picture) and « moji » (character) refers to emoticons used in emails and web pages in Japan at the tail end of the 90s. The encoding of emojis has ensured their suitability for practically all types of operating systems since then. The cultural background underlying the use of facial expressions to convey emotion continues, with the West focusing primarily on the lips and the Orient favouring the eyes. The beauty of emojis is that they combine both lips and eyes. New emojis are always appearing, to the point that there is already an Emojipedia in existence.

Emoji therefore are the little symbols on our mobiles that are sometimes animated and help us to express ourselves faster; lighten the mood; add a jokey touch to private or professional communication; tell a white lie by simply adding 🙂 and even calm situations down or sugar-coat them (« actually it’s my turn next time round to sort things out :)… cheers »). Naturally there is an attempt to qualify matters by toying with what has been written… An infinite variety of human feelings can be expressed via cheesy smiles, fixed grins, pouts, grimaces, frowns, laughter, and anger that are standard and instantly understood worldwide. Despite appearances to the contrary, there is nothing to suggest the emoticons are not the end result rather than the cause of a general trend to move away from formal sentences in favour of images. What’s more part of being human means having a proven history of using pictures and symbols to express oneself, so it’s actually quite surprising that no one has come across a charcoal traced smiley on the walls of caves inhabited by Cro-Magnon and Neanderthal man yet!

The usual methods employed to mollify and placate that rely on a distance being established between the persons concerned (as well as individuals and their own emotions) is on the way out. By introducing emotion into text, emojis express the victory of the individual over social function and expected behaviour. It is a cool twist that humanises daily communication by freeing the latter from its slightly stiff shackles (>_<). But shining the spotlight on feelings is never without risk…

Candle, scented ovale soap and capsule on the one hand, and rebus, allegories and digital implementation on the other hand: the collaboration of fashion designer Olympia Le-Tan with diptyque on fragrance Rosafolia, illustrated by the theme of a woman’s bag and expressed by the rebus in emoji “the key of my heart is in my bag” comes along with an exclusive series of emoji available to download here 🙂