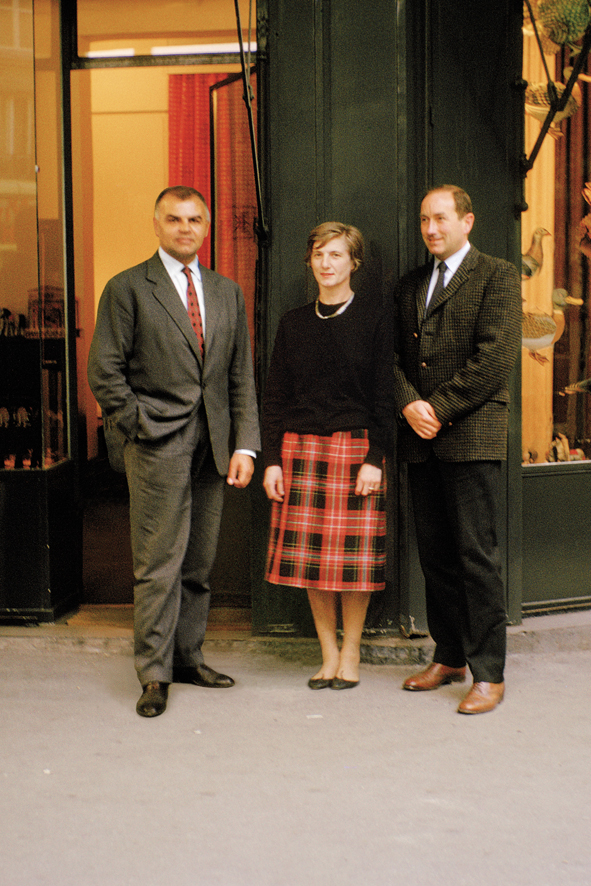 It is worth remembering from time to time, even if we are repeating ourselves, that diptyque was the fruit of three artists, friends and bohemians who travelled the world. They created the spirit of the house. The word artist may well be trendy, but for the founders of diptyque, it was a way of life.

Desmond Knox-Leet, Yves Coueslant and Christine Montadre knocked about together, combining their talents and passions to launch a common house called diptyque. They looked at the horizon together.

Desmond embodied the soul of the house, oxymoron permitting. He was a painter and a big fan of calligraphy and cryptography. He painted all his life. Right up until his death in 1993 he was illustrating labels for diptyque perfumes, drawing images that were often inspired by their olfactory elaboration. He also created the diptyque alphabet with its initials and dancing letters. And then he became the inventive nose at the back of the shop, mixing substances to create the first scents for candles and later on perfumes. He enlisted the help of professional perfumers by initiating loyal collaborations but always kept his own nose on the job and his pen in a bottle of Indian ink – his brushes always ready for action.

A graduate in the decorative arts, Christiane Montadre was a designer and hands-on creative. Hats, clothing, tapestries, one of which was displayed at the decorative arts fair at the Grand-Palais, were all her thing. She designed a lot of jewellery and decorative objects for diptyque, playing with the colour of materials. With Desmond she created diptyque fabrics Choriambe, Paladin, Fabliau, Légende, Basile, Sarayi and Prétorien with geometric patterns inspired by abstract art and modern art of the time. These prints are now preserved at the Museum of Decorative Arts in Paris. Her knowledge of architecture, history of art and traditional arts earned her important commissions. She was commissioned to rehabilitate an old Parisian facade in polychrome. Architect Michel Pinseau called upon her services to decorate the Moroccan pavilion at the International Exhibition in Seville in 1992. After this she designed many zellige patterns for the Hassan II Mosque in Casablanca.

Yves Coueslant, on the other hand, was a former student at the Ecole du Louvre. He spent nearly twelve years in the theatre world before founding diptyque with his friends. An assistant at one time for decorator Paul Fréchet, he had embellished the apartments of Michèle Morgan and Edwige Feuillère as well as one belonging to Jean Cocteau! In the theatre he worked as a scenographer, decorator and tour director, for both Elvire Popesco and the Comédie-Française. He was also a stage manager, prompter and even a substitute actor on stage with theatre great, Michel Simon. A painter in his spare time, he had the honour of painting a portrait of the great actor in private… Therefore, after the death of his great friend Desmond, it was he who took on the role of designing and illustrating the labels for candles and perfumes launched by diptyque from 1993 until his death in 2006.

diptyque was primarily a playground for these three great friends. They showcased artisan pieces alongside their own creations in a riotous burst of colour and taste, not the taste of the day nor expected taste but a style that was a reflection of themselves, and obvious to the discerning eye. And before long, their noses would join the party too…