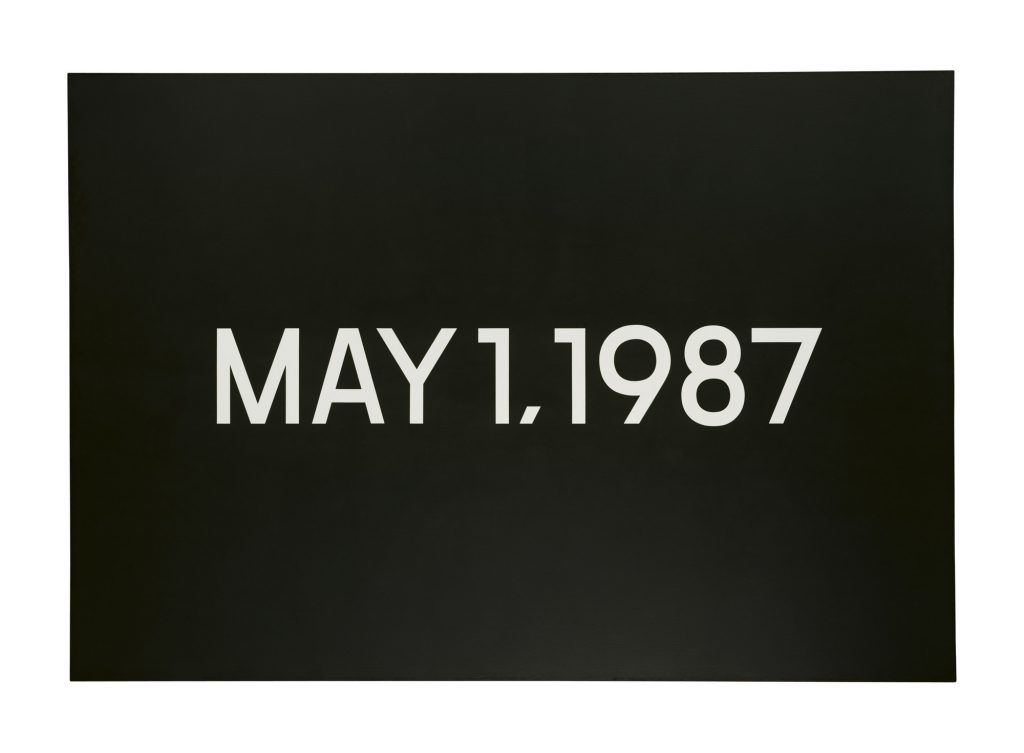 On Kawara, by Paul Nyzam

Simple dates written using white numbers, perfectly centred on rectangular monochrome canvases, sometimes black, red or blue. The day, month and year; nothing but this basic data. These are Date paintings launched on the 4th January 1966 by On Kawara (1933-2014), a Japanese artist living in New York Over the course of half a century he has produced approximately 3,000 paintings in eight different formats in a series simply entitled Today. The dates themselves nod to the country in which the artist found himself and the date the painting was created. From one work to the next you experience the itinerary of a nomad: Jan. 4, 1966 in New York; 6 Junio 1968 in Mexico ; June 5, 1973 in Halifax ; 24 März 1976 in Berlin ; 4 Août 2006 in Montfavet ; 21 Juni 2007 in Anvers, etc. Sometime after the first Date painting, the artist decided to give each painting its own tailor-made box in which he inserted a cutting from a newspaper published in the city where he found himself on the same day as the date on the painting.

Today. That’s what On Kawara captures on his canvases. Not just now, but also here. A day and a location. These dates, that follow each other in succession, paint a picture of a mysterious artist who would hide from journalists and photographers throughout his life. Date paintings are only part of On Kawara’s work. There are several series with understated titles including: I am still alive – telegrams with no other wording than « I am still alive » sent to well known people in the art world (at the end of his life On Kawara would substitute the telegrams with tweets); I met – plain sheets of paper with the names of people the artist met over the course of a day typed on them; I got up – postcards sent by the artist from all over the world with just the time he got up written on them. Every series has the same thing in common – an obsession with capturing the fugitive facets of existence.

Created in a day – any piece of work not completed within 24 hours is automatically destroyed – each Date painting obeys a strict protocol, the execution of which is like a kind of meditation. The artist needs several hours to achieve this state of formal perfection and that time frame makes you think that perhaps the dates were stencilled or printed. Not the case. On Kawara covers the surface of the canvas with several layers of paint until he achieves a profoundly dense and perfectly uniform background from which the white letters and numbers surface, the latter also painted meticulously by hand.

One of the peculiarities of Date paintings lies in the fact that their conceptual radicality is not in opposition to the painting but it is with it. On Kawara is an artist and, by exercising his craft, he is at odds with many of his peers of the time – conceptual artists Victor Burgin, Vito Acconci, Lawrence Weiner, and Hanne Darboven – whose work clashed with pictorial practice. But he was in the same camp as one of his contemporaries Roman Opalka (1931-2011), whose started his series called Details (sequences of numbers inscribed on the same sized canvases, going from 1 potentially to infinity) a year prior to the Date paintings. His work demonstrates the same crazy desire to anchor the irremediable flight of time via art.