Flame is enthralling. It soothes us. While it increases one’s attentiveness, it makes duration perceptible. The instant expends itself: doesn’t it seem that the flame is lightning time? As far back as known, the flame was associated to life itself, celebrating anniversaries as well as many rituals. Most of the spiritual celebrations have called the quiet and dancing stillness of the flame for their ceremonies. Even beyond any kind of belief, lighting a candle remains solemn. Here is a little saga for the holidays, with various evocations associated to the candle, such as this scientific anecdote:

The great French scientist of the 18th century Antoine Laurent de Lavoisier (1743-1794), who was a chemist, an economist and a philosopher, came to some key conclusions of his times while watching his candle burn. In those days, a mechanistic model of life started to prevail: human beings should obey the same fundamental laws which run physics and physical chemistry. Hence, as Lavoisier was observing that his candle was consuming oxygen and producing carbon dioxide, such as the breathing of mammals, he concluded that breathing is combustion. Nevertheless, as the historical logic is not properly rational, Lavoisier was not condemned to be burnt but guillotined – or beheaded – instead. 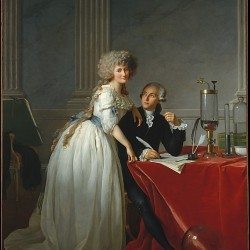