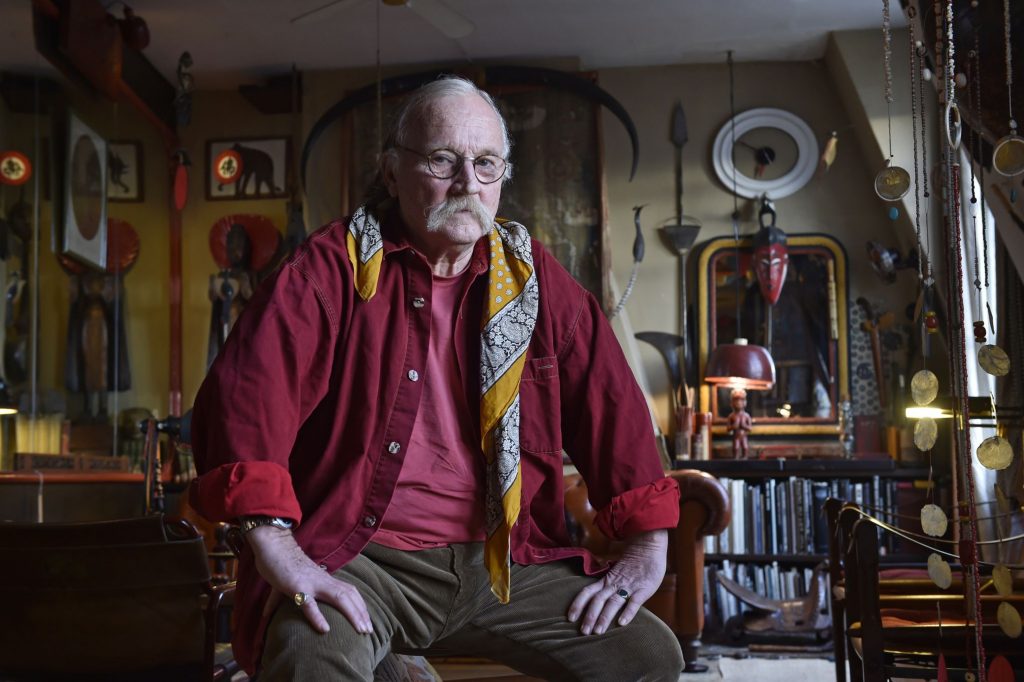 Tributes to Paris in memento owe a quick trip to photographer Bernard Hermann’s flat.  This reporter and great traveller decided one day to create a collection of photographs taken exclusively from his flat of the banks of the Seine, opposite Notre-Dame cathedral.

A former photographer and reporter for a newspaper, Bernard Hermann has packed a lot in his life. He sailed on ships for many months, went 7000 km down the Amazon for 8 months, lived in many far-flung places including Mongolia and Polynesia and has created many photography books about the lands and cities he has visited and lived in. He also travelled with his friend, the writer Sylvain Tesson to Lake Baïkal. The latter, a great traveller who has written a lot about his extreme journeys, wrote the preface for a number of Bernard Hermann’s books, including the one that is the subject matter of this article: Paris, Km 00 – photographs of a travels from a bedroom.

The journey is not about moving to somewhere different but in attention to detail. This defines the moment by escaping from routine and repetition. The moment is easier to capture when one is far away from home amongst the novel where everything – landscapes, atmosphere, language, customs, sounds – surprise and capture one’s attention. Because only attention disorientates a person. Bernard Hermann, who insists in writing that he does nothing and who adds the wise words of the idle: “first of all do nothing, then have a rest”, does the opposite by knowing how to direct his attention to detail by seeing, listening and welcoming every moment in the serenity of his perception. The person who has learnt how to do this no longer needs to travel across the big wide world. From his observation post in his flat on the left bank overlooking the Seine, on the corner of Rue Saint-Jacques, from the top floor and from three windows and a transom window overlooking Notre-Dame, the photographer with his nonchalant acuity observes, spies and rejoices in this infinity of shots.

From this flat, which Sylvain Tesson compared to “the smoking room of an Officer of the Crown who took on Buddhism on his return from India”, and for a period of ten years, Hermann photographed what he saw, the light that breathed life in a mask on his wall, the fog sweeping into Ile Saint-Louis, lovers strolling along the banks of the Seine, birds, passers-by, kids playing, a little old lady with a slightly bent back, all these strangers who are life itself, lives that are barely more than instants in time but which come into view when they enter his lens via the main and eternal backdrop – Notre-Dame cathedral. Some days the shots are like engravings, and the Seine looks like a sliver of silver dotted with bridges and silhouettes.
At this point of km 00 (the location in front of Notre-Dame which is point zero kilometre-wise of roads leaving the capital), and the shots taken of it from a very fortuitously located flat, represent the whole world, all of life unfurls here – as everywhere.
And the photographer add a little comment to each shot, a smile in the eye, without ever losing that sense of surprise when you first see that which is always hidden behind what you think you know because you simply recognise it.

Silver, black and white, naturally. Each photograph expresses the soul of the photographer who loves to see, loves what he sees, who questions and has fun doing it and who knows that beauty in the eyes of a photographer is like a bird flying by very fast. Hermann’s slow indolence captures it as quickly as a cat pouncing on its prey.