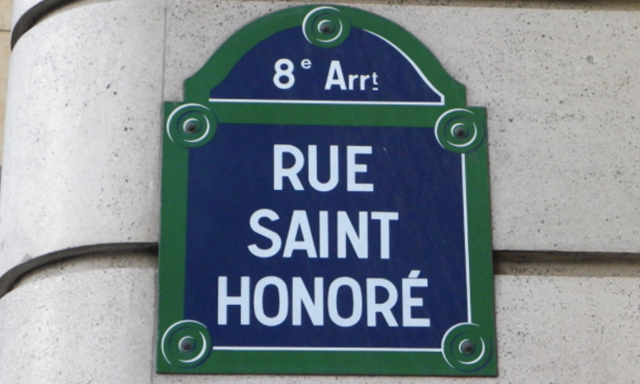 Paris! Where exactly? Which part? The city has a hundred faces. Each with a mask. Literature everywhere keeps a steely eye on them. Fashion mirrors their reflections. A flutter of the eyelashes later, two streets behind, another light shines in the shadow of a carriage door. The city of letters is a drawing comprised of bridges and landmarks.

« I don’t think that there is any other capital quite like it with not just neighbourhoods but islands, sometimes just two or three streets, a bit of a garden, a courtyard, islands that have their own established practices, their separateness, their group solidarity, their own special cats. » wrote the great dame of literature Colette (Paris, I love you!). This free-thinking writer became the perfect Parisian but she was not born here. She did not have Paris in her heart. The flamboyant resident of the Palais-Royal learned to love the city.  Because towns and tiny lives proliferate in the big capital.

Take the Rue Saint Honoré. Today it’s buzzing. But this student remains indifferent: « Your alarm rings, you stay stock still in your bed, you close your eyes. Other alarms start ringing in adjoining rooms. You hear the sound of water running, doors slamming, footsteps rushing down stairs. Rue Saint-Honoré starts to fill with the sounds of cars, squealing tyres, crunched gears and tooting horns. Shutters bang, shopkeepers raise their iron shutters. You do not move. You will not move » wrote Georges Perec, who lived in the street twice, in A man Asleep (1967). But we shouldn’t listen to the story without the song as well, and American group from Portland Pink Martini sing about losing their minds in Saint Honoré in the song Oú est ma tête?: « J’ai perdu ma tête / Dans la rue Saint-Honoré / J’ai cherché ça et là / Je ne l’ai pas trouvée / Dis-moi Où est ma tête ? » ( I lost my mind/In Rue Saint-Honore/ I looked everywhere/ I couldn’t find it/ Tell me where is my mind?)

Rue Saint Honoré, from bedridden novelist to a musician who lost his head, everyone is on friendly terms.  As for everyone else, they follow their freedom to the letter. Because « Paris is the main reading room in a library that crosses the Seine » (Walter Benjamin). That very same freedom that allows movie director Jacques Rivette to end the generic of his first movie “Paris belongs to us” by this quote from Charles Péguy: “Paris does not belong to anyone”.