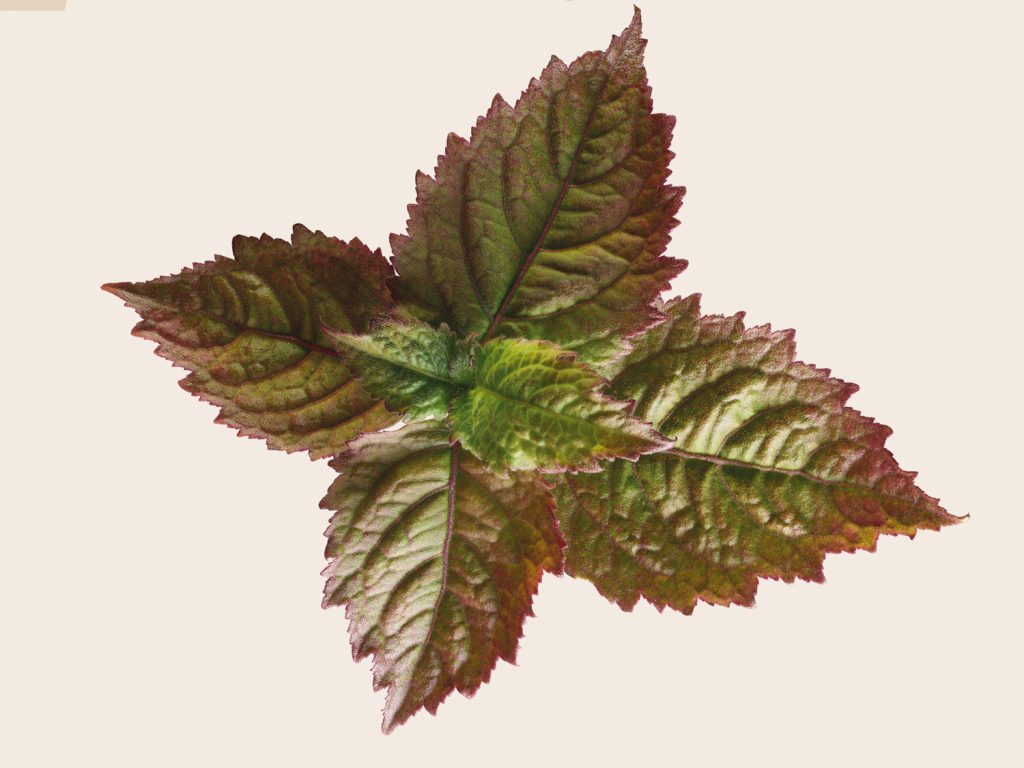 Patchouli comes from far-flung lands, mainly Indonesia and Malaysia. It has travelled far in other ways too since an demanding perfumery sector has treated it with more finesse and freed it from the social prejudices that linked it to the easy-going morality of Parisian courtesans and hippie culture.

The power of the scent of patchouli covers a wide palette of olfactory colours that subdue almost to the point of nausea: its classically deep notes of wood, camphor, earth, moss, damp greenery and smoke can expand to dark accents of mildew, fermented apple and cork. This olfactory amplitude is so rich that no chemical synthesis can reproduce it in all its profound complexity. Patchouli for the perfume industry is mainly grown in Indonesia. The scent is obtained by artisanal distillation in the villages in which it is grown.

But the intense odoriferous trail promised to any perfume that embraces it is an asset that nevertheless has labelled patchouli in a dishonourable way.
One reason is because it was often used to camouflage more shifty types of smells.  It was blamed for scenting alcoves where members of the rich bourgeoisie committed their statutory infidelities during the XIXth century. Roll on a century and it was suspected of masking the thick scent given off by that old hippie favourite – hemp.  Slanderous!
But in fact patchouli was also very popular in Paris during the Second Empire. It was found that the cashmere shawls imported from India in rolls with patchouli leaves inserted amongst the folds to deter moths were a big hit with consumers scouring silk stalls: the fragrance being a big factor in their choice of purchase. But becoming a favourite of coquettes brought this fragrance into disrepute.
The patchouli fragrance came back to Europe a century later when it became the olfactory emblem of hippies because it spoke of India with its bright colours, conciliatory Gods and orvietans that were both psychotropic and imaginary in nature.
This fall from grace was also due to the natural odour of patchouli, which became the bed, so to speak, of many perfumes of modest quality. In the West therefore, patchouli wasn’t just knocked by being associated with love without the blessing of mariage but also by being linked to perfumes of low extraction. Patchouli had got itself into a right old pickle.

Great, often innovative, perfumes have rehabilitated patchouli, the base note of which has the ability to lift other ingredients to its olfactive accord. Its presence is rarely lacking in so-called chypres, woody or oriental perfumes. But it is its chemistry in particular that restores this plant’s respectability in the perfume industry by using a finer fractionation process when redistilling its essences to soften their most saturated phases. Patchouli perfume is therefore refined so it can be worked on in a more meticulous manner.
For the composition of the perfume Tempo centred on patchouli (which is part of a perfumed diptych, the other being Fleur de Peau with its middle note of musk, celebrating the House’s 50th anniversary), three different extractions have been put together for olfactory harmony. The Indonesian patchouli was grown under the umbrella of  Givaudan’s « Origination » programme that creates supply chains for natural raw materials by means of ethical and sustainable partnerships to guarantee the highest product quality. Patchouli production remains artisanal and small scale in nature. In addition, the fractionation calibration of its perfumed spectrum raises its cost and makes it more rare.

While patchouli experienced its infamous European avatars – always at the expense of women, it goes without saying – until science came along to give it back its honourable reputation, the plant never lost the respect in which it was held in Asia, from India all the way to China. Its perfume is often spurned for incense purposes but the plant has great medicinal properties, especially in Ayurvedic medicine, and until it became linked to love, some alcoholic macerations containing patchouli were even used in Malaysia for wedding night purposes.

The remarkably sensual nature of the patchouli scent comes from its profusion and breadth. It excites the sense of smell but by doing so bothers and saturates it at the same time. But we now know how to handle it in the perfume industry with grace at the peak of its intensity to its penetrating ambivalences, paying tribute to its synergies by balancing them all out.