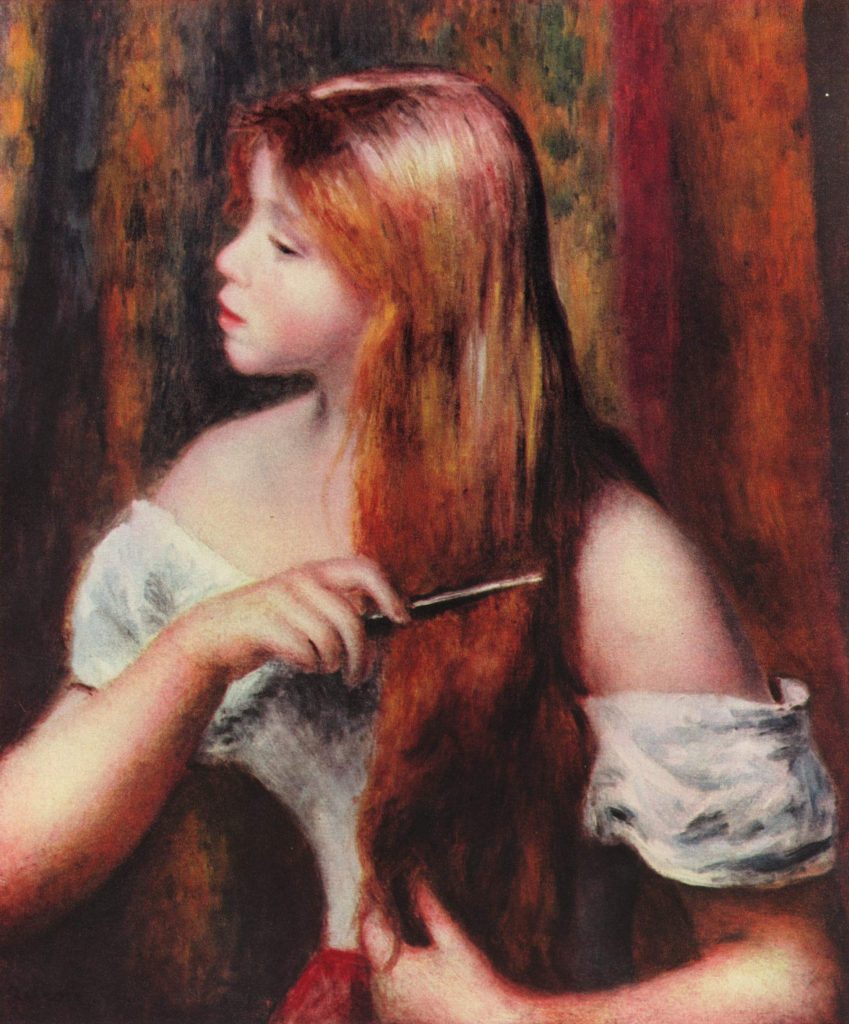 Oh to have something to go on! But as Renoir said: « A painting hears the most nonsense! »
From that I can only surmise that when looking at a painting like this by Renoir perhaps the only « comment » of value might the words of Guillaume Apollinaire in one of his last poems called, La Jolie rousse (The Pretty Redhead):

No point hoping to find any words uttered by Renoir on the topic of this young girl combing her long hair… Pierre Bonnard recalls: « When he was living in the Midi, where I also spent a few months, I used to go and visit him at the end of the day so I wouldn’t interrupt his painting session. We used to find him puffing on a cigarette, squinting at the canvas in progress. He talked without restraint but never about painting. » Never ever… Renoir never betrayed this adverb other than by being part of the bewilderment that provoked its exigence. In 1880 he broke his arm.  He wrote the following to his friend Théodore Duret: « I had fun using my left hand, it was most amusing and even better than what I was doing with the right hand. I think it was great that I broke my arm, it forced me to advance. » Four years later in La Rochelle when he appraised his skills in comparison to Corot he said to his art dealer Paul Durand-Ruel that despite the rain « … the little bit that I did, or that I will do in the future, shall push me forwards in my endeavours ». The years passed by and it was from Essoyes that he wrote the following to the same Durand-Ruel: « Once more I have started (and I will never stop) employing a painting technique that is soft and light. I want to return with a series of paintings because, now that I’m not searching anymore, I will make progress with each one ». An assuredness that was put in question in 1891 during a break at Tamaris-sur-mer: « I’m struggling trying to stop feeling my way. I turned fifty four days ago and if at this age you’re still searching then it’s quite serious. » A letter accompanying a package sent to Durand-Ruel with postage unpaid said: « There are eight canvases inside, two of which are barely feasible. » Four days later, worried about his package « a mish-mash of studies », he felt the need to clarify further: « I am making progress and I wanted to feel super happy with myself. » Had he ever been? Probably not. In 1915 he heaves a sigh again: « Ah! what misfortune, every time you think improvements have been made, you’re one step closer to the tomb!… If only there was more time to create a masterpiece… »

Does this tireless quest for advancement indicate that this painting of a young woman brushing her hair in 1894 was perhaps not quite up to scratch in the painter’s eyes? A crazy thought…All the more absurd when you consider that by 1894 Renoir had known what painting was all about for some considerable time. The proof: « Listen, I will tell you my secret… don’t tell anyone. Yes, I will tell you where I found the secret of painting… It was in the tobacco shop! One day I was buying cigars and thinking about this damned painting and the guy handing me to two boxes said “Colorado? claro?” Colorado! claro! I said to myself, why that’s painting… I’m holding on to that thought and bought two boxes. »

All that remains is to disregard Renoir’s statement that he did not deny himself the pleasure of chastising « literature, this enemy-born from painting ». This satanic literature did not assume the right to give a title to the painting Young girl combing her hair. This remained a succinct description. Giving it another title, as some did with Thought, would provoke this statement by Renoir: « Why was my painting given such a title? I wanted to paint a lovely, charming young girl without giving the painting a title that would suggest that I wanted to portray the state of mind of my model… This young girl had never thought, she lived like a bird and nothing more. » This model who was brushing her hair is probably no different. But perhaps it was this action of brushing her hair in  the studio that suddenly generated the canvas… Because Renoir, who needed the presence of such a model, affirmed that the latter « was only there to fire me up, permit me to try things that I could not invent without her and make me land on my feet as long as I don’t get too swept up in the process ».