“Has to be wintry flames…

But it really seems this siren has risen from the ashes though… Please, let reason hold the reins!

What piece of epic is that?

Does anyone understand anything out of this? It sounds like this language of birds that was spoken by the alchemists so to be only understood by “the insiders” or initiated people.

Actually, these are cheap anagrams, instead of calligrammes… A true anagram is a word made out of the same letters of another word, or even better, a phrase composed with the exact same letters of another. Desmond Knox-Leet, one of the diptyque’s founders, the painter, had been found of these games and probably even an expert: during World War II, he had been hired in the British secret center of Bletchey Park where all sorts of brilliant minds were gathered in order to break the codes of the enemy, including the famous “Enigma”. That will be the subject of another post in the future. Such a thought process led to the labels we all know, with their letters dancing all over the place sometimes.

Neither siren, nor risen, nor reins… but résine (resin)

Neither piece nor epic… but épice (spice)

No heir, no hire, no hive… but hiver (winter)

Epice, Hiver, Résine are three fragrances. Each of them is illustrated by the collective of artists Qubo Gas, as a chromatic correspondence with Desmond Knox-Leet paintings.

As every year, diptyque launches a special collection of candles for the end of the year. Wintry flames for wintery evenings, or wintery presents, these candles are dedicated to such a warm presence. 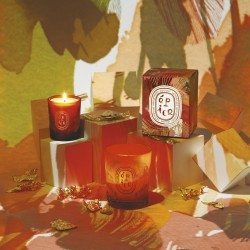 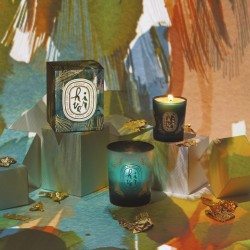 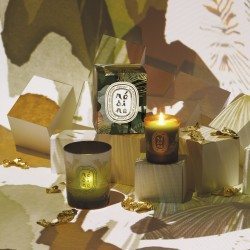