Associations of ideas spread like a sugar trail. Turkish Delight (Loukoum) is the title of a 1973 film by Paul Verhoeven. Raw and a poke in the eye to respectability, the film demonstrates the cinematographic talent of a young director.

Turkish Delight is an adaptaton of a novel by Jan Wolkers that was published in 1969. This writer was also a sculptor like Erik, his protagonist. This story certainly reflects the autobiography of a young man who gulped from the chalice of the Sixties with obscene greed. There is something of the degenerate hippie about this young man from the early Seventies.

Erik is played by actor Rutger Hauer and in himVerhoeven believed he had found his own Marcello Mastroianni (for F. Fellini) or J.P. Léaud (for F. Truffaut). The actor bursts on screen with a violent and unbridled vitality as brilliant and shiny as his blond hair. An unihibited seducer, an arrogant, unsavoury, filthy, provocative male, he embodies a freedom that plays on all nascent social and especially bourgois norms: the film is thumbing its nose at social order, contrasting one vulgarity with another, Erik’s being the most candid. His handsomeness and his dedication to art justify any disparity. If all temperance is out of reach, the real love he feels for Olga teaches him some semblance of tenderness and patience.

Brutal and vulgar are only value judgements for Paul Verhoeven who wanted to anchor his realism in the great tradition of his Nation, that of classical Flemish painting with its painstaking verismo, and Jérôme Bosch who doesn’t shield the prudish eye from any indecency whatsoever. His filming style borrows from the documentary approach, often shot with the camera on his shoulder, he likes natural settings but his framing technique and the care taken with photography (directed by Jan de Bont) are the techniques of a filmmaker who knows what he is doing and deliberately produces the format for artistic content – and who is not bothered if he displeases anyone along the way.

As for Turkish Delight, the appearance of this sweet in the film is not given its fair share of screen time: Erik offers them to Olga who wolfs them down as her imminent demise beckons. They speak of excessive compensation of sweetness in the final moments of love and life. 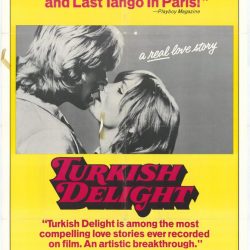