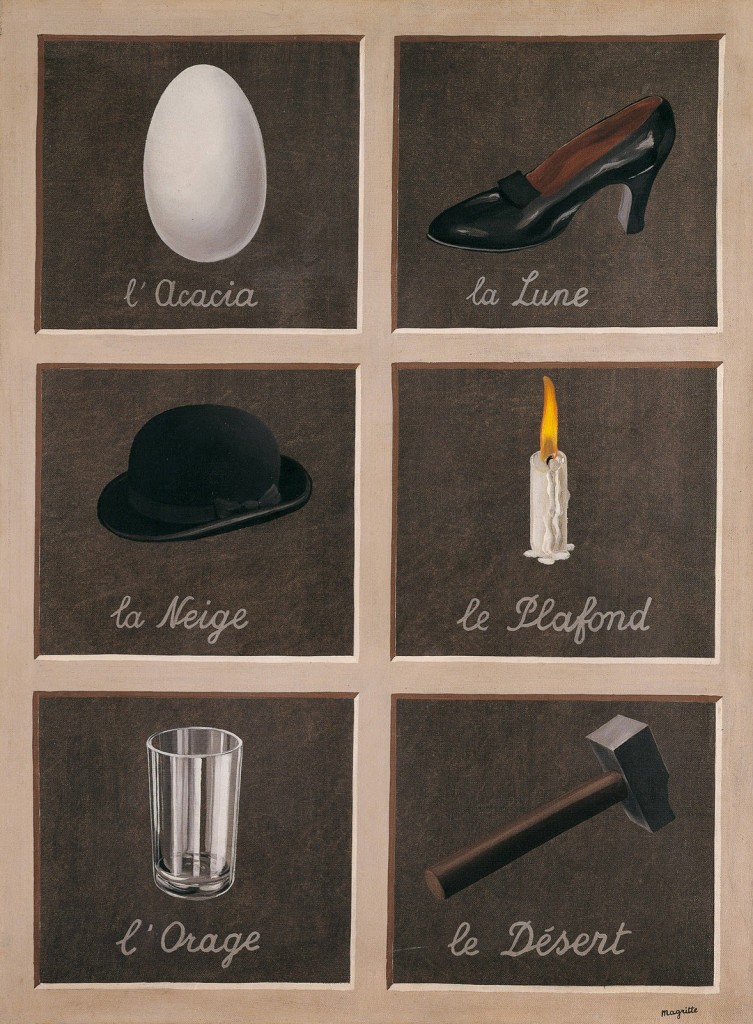 This is one of Magritte’s most famous paintings, to be read like an enigmatic comic book in six squares. In the first square is an egg with the words “l’Acacia” (the acacia). The egg stands for the beginning, underlined by a word containing three times the letter A, the first letter of the alphabet. Then a woman’s shoe and the inscription “la Lune” (the moon) evoking a female power. But what is the relation between a hat and “la Neige” (the snow)? Apparently none. Yet their association evokes a landscape in which the snow falls on a hat that protects the wearer. The fourth square represents a candle with the words “le Plafond” (the ceiling). The rising flame follows on from the falling snow. Then a glass and the inscription “l’Orage” (the storm). What do the two have in common? Water, of course. And finally, the last square combines a hammer and the words “le Désert” (the desert).

I suggest that we understand the rebus as the enactment of the traumatic experience that Magritte had at the age of fourteen: one stormy night, his mother disappeared; her body was found several weeks later, caught under a bridge. She had thrown herself into the river.

Let’s take another look at the rebus.

At the origin of everything (the egg), there is a woman, his mother (square two). She “falls” (square three). The night comes (square four). In the Catholic religion in which Magritte grew up, the soul leaves the body at the time of death to rise heavenward, like the flame of a candle which, in many legends, symbolises life. Water – glass and storm – has the power to extinguish it. The penultimate square therefore evokes both that which destroys the flame of life and the place where his mother died, i.e. water. It also evokes that terrible stormy night. The last square is the epilogue: the young Magritte finds himself alone, deserted, as if in an empty desert. He has received a “blow to the head”, and is worried he might “devenir marteau” (go crazy)… Magritte did not react to this tragedy merely by a heightened sense of the absurd. He also resorted to a solid sense of humour.