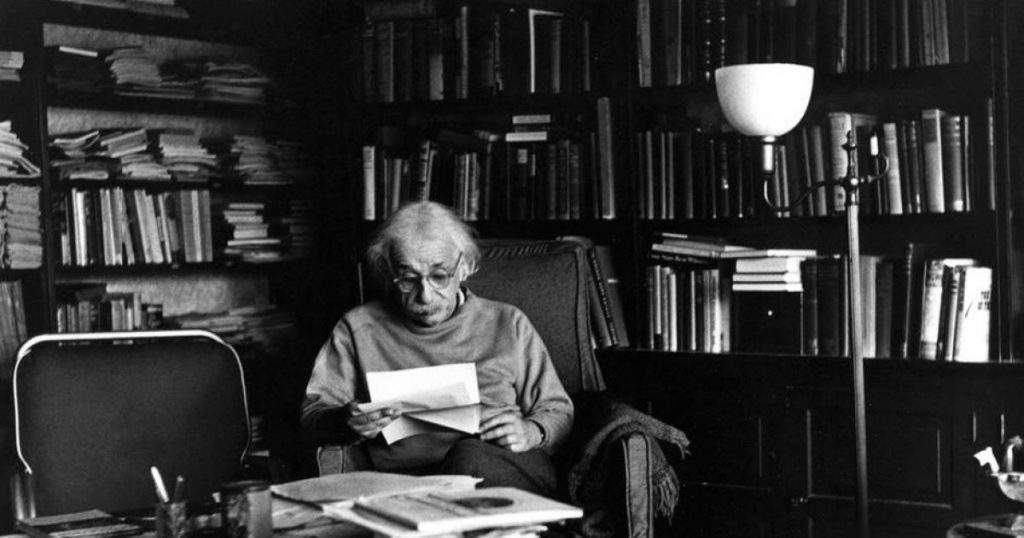 Since Einstein, it’s a given, time is relative. To consider that the duration of time between two events can vary depending on how fast you are moving goes against logic. You have to hammer the concept in your brain. But due to this relativity between space and time, when the hammer hits the nail, the latter hasn’t been there for some time.

It would be comical to try to explain in a few words something that is incomprehensible to normal common sense. In order to be understood this concept requires specific language, that of maths and non-Euclidean geometry. However, we shall attempt to smooth the edges.

Albert Einstein recounts that the idea that gave him the most happiness was the realisation that « a person in free fall does not feel their own weight », therefore objects or beings falling together don’t seem to be falling but seem weightless in relation to each other because they are within the same inertial frame of reference. For Einstein, this evidence – the effect of weight and the fall seem to cancel out the cause, which is gravity: the scientist then established a principle of equivalence between gravity and acceleration. It is now 1907, two years after he published his articles on Restricted or Special Relativity (which is, as everyone knows only too well, a universal space-time theory).

Another idea about free falling came to this enlightened genius: imagine a horizontal beam of light coming from an elevator moving vertically with constant velocity. By the time the ray of light has passed through the elevator cabin and reaches the opposite wall, the ascent of the elevator means that its point of impact is lower than its point of entry: therefore, for the observer, the light appears curved. Thanks to the principle of equivalence of gravitational and inertial mass introduced above, what is observable in the moving elevator is that the gravitational force experienced locally while standing on a massive body is the same, therefore the light is seen to bend. Albert Einstein spent eight years working alongside mathematicians before publishing his Theory of General Relativity in 1915, which is the geometric theory of gravitation. He determined that massive objects cause a distortion in space-time, which is felt as gravity. The consequence is that the straight line of a trajectory appears to follow a curved path. These curves dilate the space. The path of light adheres to this moving geometry. But its absolute and stable speed makes it possible to measure variations in duration and distance, hence time and space.

The theory of Restricted (Special) Relativity showed that rather than an invariate time interval between two events there is an invariant space-time interval. Motion slows down time: clocks in motion go slower than stationary clocks. The sand in an hourglass in a spaceship takes longer to flow than it does when on the ground. At high speed, the dilation of time slows down the gradual human ageing process.

The theory of General Relativity demonstrates that within this stable but plastic space-time continuum, matter slows down time. If only on the terrestrial scale, time is imperceptibly measured more slowly on the ground that on a mountain top. Corrective calculations are subsequently necessary between a satellite and the earth.

Everything therefore takes place as if space-time that spatialises the universe is not temporal and it is displacement and speed that produce time, that is to say, the measurement of the gap between moments that can become longer or shorter depending on circumstances. Time down here is no longer short. But if it wasn’t being observed or there wasn’t any displacement, would that mean that time no longer exists? That does not feel “right” does it?