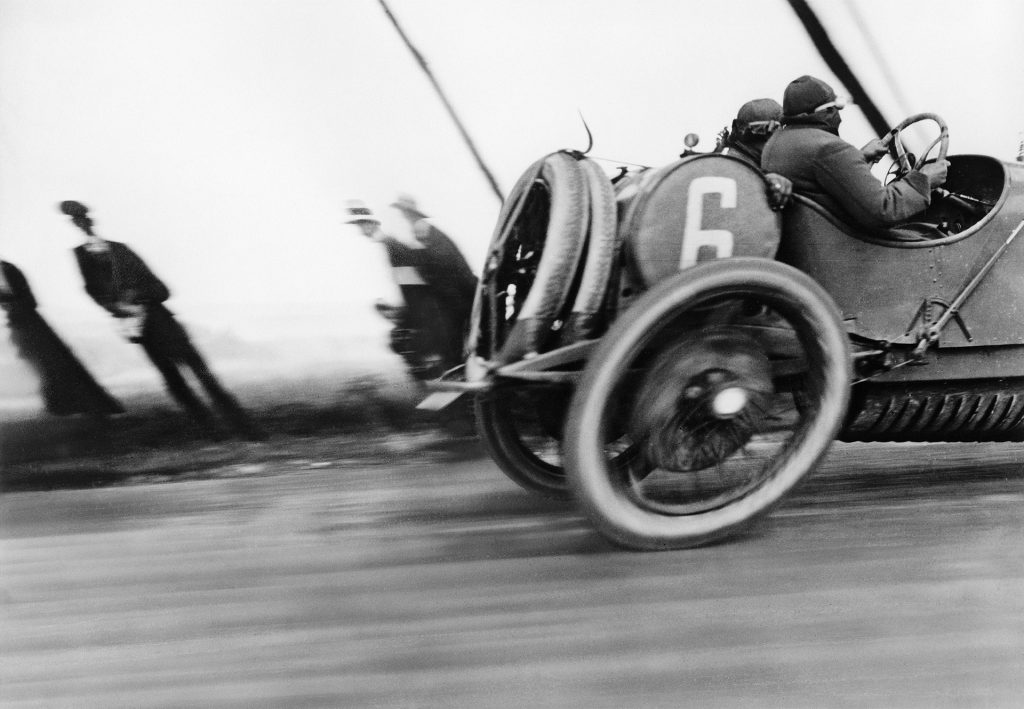 From ‘botched’ photo to iconic image by Sylvie Aubenas

In July 1913 Jacques Henri Lartigue was just nineteen years old. A sports enthusiast and amateur photographer since the age of eight, he began photographing car races from the age of eleven. He even sold a few pics to the La vie au Grand air magazine which covered all major sporting events for a wealthy customer base who adored these new leisure activities.

But a snap taken on the 12th July 1913 at Amiens of « Theodore Schneider n°6 driven by René Croquet at the ACF Grand Prix », was regarded by the budding reporter as not being up to scratch for magazines. He thought that this image, which was to become one of the most famous photographs of the 20th century, was botched… It was blurred and the main subject matter had barely made it into the frame. Lartigue, having been treated by his banker father, was using a Netter, « the camera all sportsmen should have » according to the slogan. But the shutter with its vertical curtain could barely capture the speed of racing cars: tyres ended up blurred and elliptical; the vehicle body was clear but truncated; spectators slanted backwards and the horizon was tilted… We can see the struggle between the rush to take the shot and the speed of the vehicle. This imperfect image therefore remained in storage. In 1924 Man Ray took a similar shot at Cannes and dedicated it to artist Francis Picabia, a fan of high powered cars. It was published in André Breton’s, La révolution surréaliste (The Surrealist Revolution).  He immediately understood that the haziness and distortion in the photo were far from being defects, they had the aesthetic audacity to embody this modern thing called speed. When Lartigue looked at his photo again in the Fifties he suddenly saw its beauty. When MOMA in New-York suggested running a major exhibition in 1963, he decided to add it to his selection of exhibits. And that was the beginning of its fame.

Sylvie Aubenas, an historian of photography, is Director of the Engravings and Photography Department of the Bibliothèque Nationale de France.