In the context of the FIAC 2014 (Parisian Fair of International Contemporary Art), diptyque partnered with the second edition of Private Choice, where a collection of art and design is always displayed in a special place chosen for its history. This year, the exhibition of Private Choice took place in the house where Georges Melies was born. This is an opportunity to pay tribute to this tutelary ancestor of cinema.

There is no way little Georges will ever take over the family shoe factory. He wants to be an artist. His parents will not let him join the Beaux-Arts school either. After being the pupil of Gustave Moreau, the great symbolist painter, Georges is sent to England to learn English at age of 18. He will learn the art of being a magician instead. He had always spent his whole time drawing or making up stories. When he goes to meet the legendary inventors of cinema, the Lumière brothers, to acquire their patent, Mr. Lumière senor, their father, tries to deter Mélies: this prototype has no future!

Off he goes to England again to buy a competing process, the animatograph. Then, he just creates from scratch a profession for his calling: filmmaker. He will release more than 500 movies (most of them very short). To make them happen, he will create many new crafts, or roles: producer, director, scriptwriter, set designer, actor, machine-operator, actor’s director…

Is there any bad weather? He builds up the first motion picture studio in his large house in Montreuil right next to Paris, in 1897.

1902: A trip to the moon is the very first science-fiction movie.

Above all, he is an artist, an inventor, making-up new ideas all the time. An artist of special effects. Let us be reminded that he had founded the Academy of Prestidigitation (magic-tricks) in 1891. He pushes the technical possibilities of the time with genius, inventing the crossfade effect, the technique of superimposition, the close-up, the slow and quick motion, the use of conceals and miniature models, the frozen picture… He himself paints the smokescreens and trompe-l’oeil of his settings, and also colors by hand his photographic films!

He is the father of modern cinema. The American titan D.W.Griffith will say: “I owe him everything”. For Charlie Chaplin, he was the “alchemist of light”. In 1896, he named his picture company Starfilm, hence launching a new word without knowing how essential it will become for cinema.

Mélies’ works will be copied and looted. As an artist, he did not really know how to react. Gaumont and Pathe are far away giants against whom his American society run by his brother remains powerless. Ruined and despaired, he will destroy all of his works. Most of his photographic films will be melted so to recuperate the silver they were made of, when not used as soles for the soldiers ‘shoes during the First World War.

He will end up selling candies… By mere chance, someone will recognize him one day and by the end of his life, he will eventually be awarded and celebrated.

There is an irony of History though: it is owing to the illegally confiscated properties of his movies, when not directly pirated, by major American companies that a large part of Mélies ‘work still exists today and remains accessible to all.

Martin Scorcese pays tribute to Georges Melies in his movie Hugo Cabret featuring Ben Kinglsey. He portrays this grand artist in the same way her grand-daughter recalls him: “He was so gentle, always in a good mood, always flowing with ideas to entertain himself and everyone around. He was a sportsman, energetic, looking young, utterly honest, righteous, facing adversity with wisdom and philosophy. He was never disillusioned or disappointed. It is not a surprise that one discovers today all the delight and enchantment of his works as he had remained all his life as close as he could to his childhood poetic dreams […] He really was the joie-de-vivre, with a constant twinkle in his eyes, a sort of a pirouette spinning round all that could hurt.” 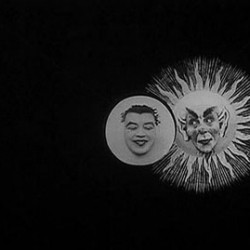 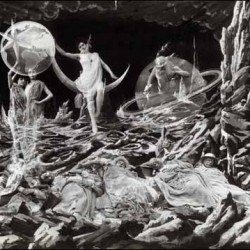