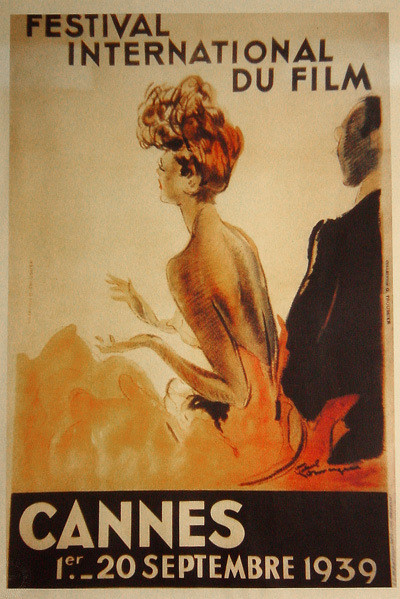 The award ceremony at the Cannes Film Festival has always been invested with symbolic significance: to reward art in accordance with artistic criteria over and above any patriotic mandate. It was also important for the award to have some kind of visual impact. Nevertheless, it was some time before the Palme d’Or became firmly established in people’s minds.

The concept behind the Cannes Film Festival was to bring film-making « featuring artistic objectivity and absolute impartiality » up against the propaganda war machine that the Venice Film Festival had become under Fascist rule, culminating with Hitler’s personal intervention  at the 1938 awards. Following international negotiations and rushed preparatory endeavours, the opening was scheduled to dazzle the world on the 1st September 1939. But on that fatal day the Nazis invaded Poland and global conflict would delay the opening of the first Festival until 1946. Tribute was paid to the Festival’s initiator, diplomat Philippe Erlanger, fully supported back in the day by the Minister of Education Jean Zay, who was shot by the Vichy militia in 1944. His ashes were transferred to the Pantheon for great men – and women – in 2015.

Back in August 1939 the general public could pop along to the Eden Roc hotel and admire the solid gold pin and cigarette holder award for the best male and female stars of the winning film, which would receive the « Grand prix du Festival International du Film. » This was the highest prize awarded by the jury from 1946 to 1954.  The Palme d’Or appeared in 1955 and was awarded for a period of 9 years. Rumbles in the organising committee meant that it disappeared from the awards at the Cannes Festival from 1964 until 1975, when it was reinstated. Barely five years later and the Palme d’Or was firmly established; probably forever.

It was Robert Favre Le Bret who dreamt up the concept of a palm to crown the winner of the jury’s vote. The plus point of choosing this leaf as a design was that it united two symbols: an emblem of victory that went right back to Antiquity plus a nod to city of Cannes via the arms of its ancestral families, perpetuated to this day by the palm trees fringing La Croisette Boulevard.

Next it was down to the jewellers to vie for the design. Lucienne Lazon put forward the winning proposal. The palm was initially placed on a terracotta base. In 1975, it was presented in a pure red Moroccan leather case lined in white suede. The pyramidal pedestal appeared a decade later. In 1992, Thierry de Bourqueney designed a crystal pyramid-shaped pedestal. Since 1997 Swiss Jewellery House Chopard has had exclusive rights to its manufacture. The award weighs in at 118 grams of 18 carat yellow gold. Size-wise it measures 13.5 cms by 9 cms and features 19 carved leaves on a crystal cushion. The trophy is presented in a blue Moroccan leather case. The palms await their heroes, should a tie occur, they are kept in the Jeweller’s vault.

As a symbol the palm has endured the passage of time and is still used to designate excellence at some universities. However this one in gold has become a legend in itself.

diptyque is an official partner of the Cannes Film Festival.