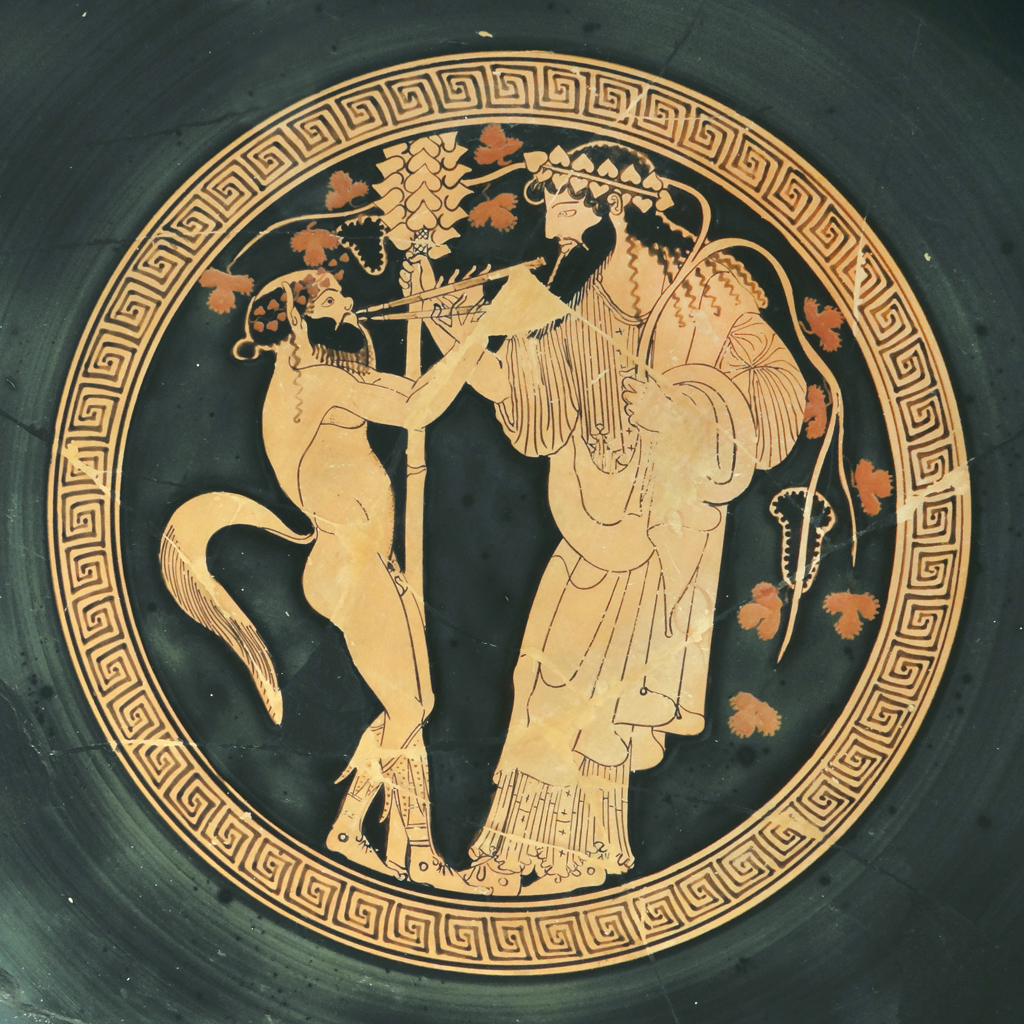 Major works of art, the great works of tragedians Aeschylus, Sophocles and Euripides (~5th century BC) are still alive and performed today. But what was the origin of Greek theatre that turned classical Athens into the place for expressing the art of tragedy and comedy?

Classical Greek theatre stemmed from the gradual evolution of the cult dedicated to Dionysus. The God of plants and wine, resurrected by Zeus after the war between Olympians and Titans, Dionysus was the God of death and resurrection. Athenians celebrated him during Lent in January and then for longer periods in early spring to herald the rebirth of life.
Hymns and epic songs in honour of Dionysus were dithyrambic and sung by a choir arranged in a circle formation.
The evolution of the dithyramb initiated a dialogue between the chorus and its leader, who, masked and in costume, would play the role of different characters. As time progressed the songs did not just celebrate this God but also the exploits of legendary figures such as Prometheus and Ajax. Athenian theatre was reborn at this point by opening itself up to other themes as well as the Dionysian cult, but still under the latter’s auspice. Later still, under Phrynicos and Aeschylus, contemporary themes – mortal rivalry with the Persian empire for example – would be evoked, and even treated in a theatrical manner; always under the protection of its God, the theatre staged a cult narrative with a nod to real news.

At the southern side of the Acropolis, the Athenian sanctuary of Dionysus was both a theatre: a lyrical performance was both a liturgical act and a cultural, civic and political event, even in the City. This theatre was in the shape of a circus, with wooden bleachers exploiting the natural slope of the hill (seating would only be made of stone from the 4th century AD) enclosing half of a circular arena called the orchestra (reminiscent of a choir in a circle), in the centre of which there was a statue of Dionysus. The priest of Dionysus was seated in the front row, facing the Dionysian altar. Behind him, in the orchestra, would be the chorus, singing about the heroes.

In front of the stands and behind the orchestra (arena) was the skènè, a kind of wooden hut, upon which were hung decorative paintings and in which actors changed clothing. Because when these epic narrations took place, under Homer (8th century B) one rhapsode (performer) brought all the heroes to life. But it was under Thespis, two centuries later, that the birth of tragedy came about: this itinerant actor was the first to incarnate each role in turn, probably changing tone, posture and clothing, his face smeared wine red, and responding to the chorus.

In the 5th century, ancient Greece’s so-called classical age, a second actor appeared in Aeschylus’s work. And a third in the plays by Sophocles. Each actor changed masks and costumes to perform several roles. It would appear that there was a maximum of five for comedy pieces. Only men could be actors (they also played women), theatre was hieratic, and the men wore high platform shoes, wigs and painted masks with powerful characteristics. Evolving initially at the same level as the choristers in the orchestra, they soon benefitted from a kind of platform: the logeion, in front of the skènè. This was the origin of the theatre stage. The theatre of Epidaurus is presented as the most faithful replica of ancient Greek theatres.
Certain theatrical mechanisms were introduced including a mechane, a kind of crane that lifted the actor up in the air to act the role of a God. The ekkyklêma was a stage mechanism consisting of a low platform rolled on wheels or revolved on an axis on the skèné, or pushed on stage to symbolise a palace. The throwing of rubble on a metal plate evoked the sound of thunder and agitated torches represented thunderbolts.

The theatre may well have been a development of the ritual of the dithyramb but it did not replace it and all genres (dithyramb, tragedies, comedies, satirical dramas) were performed in succession during great festival periods (with days dedicated to a genre). During ceremonial days, the performances followed in succession, separated by songs, in the open air in broad daylight throughout the day. The sun itself played its own role as the sun god. During the four-day Dionysia festival there were a dozen or more plays, plus dithyrambs…
Each play had to be submitted for approval by the public authority: unlike comedies, tragedies had to be performed as a trilogy (the same legend performed as three plays, like Aeschylus’ Oresteia) within a tetralogy, the fourth play being a satirical drama. Each play involved dialogue, music and dancing. And it was the archon (magistrate) who selected the plays and appointed the master of the chorus from a pool of rich citizens who paid for choirs out of their own pockets in the hope that they would perform pieces by poets selected for the festivities. But the selection of choregos (spokespersons for the chorus) for the poets was drawn by lot. The theatre was therefore a political, religious and cultural affair – characteristics of our modern day theatre.
Finally, each genre was entered in a competition. Prizes, awarded by a complex blend of judges’ votes and the drawing of lots were split into different categories – best poet, best choregos and best protagonist. The audience could voice their opinions to influence the judging process. Finally, two days after the end of the festival, the people voted for the best archon depending on the running of the ceremonies and plays.

In Greek, the word tragedy means “goat song”. Was this why a goat was sacrificed to Dionysus? One cannot be sure. But it is clear that the drama kicked off with the sacrifice of a piglet, whose blood was splattered on members of the audience.
As for comedy, “song of the komos”, the origin was a noisy and festive procession that involved singing and dancing, often dedicated to Dionysus, representing the frenetic extravagances of the maenads and satyrs accompanying the god, all drunk and lustful and abandoning themselves to great uproar, chucking wine on the ground and carrying an outrageous emblem of the φαλλός, a drawing of which is not necessary… Soon they too would gather to mock their Athenian contemporaries and their offshoots: Aristophanes (5-4th century BC) excelled in this and even took the liberty of making fun of Dionysus in his play “The Frogs”. More current, political and social, the mocking comedies of the time however have aged more than the great tragedies whose universal scope has kept them fresh.

This deep-seated origin of theatre (etymologically: to look, to gaze at), associated with Dionysus, god of exultation and of regenerated life, draws its source from religious devotion, the sacred, the status of men in relation to that of gods, the symbolism of sacrifice, blood and the festive joy of regeneration. Many civilisations have come and gone since then, but these roots are still alive in great theatre, whether tragic or comedic in nature. 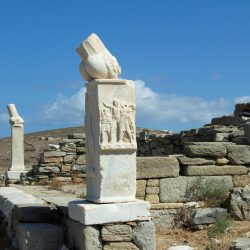 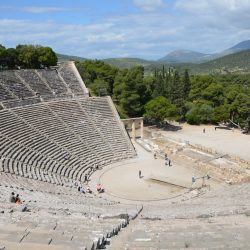 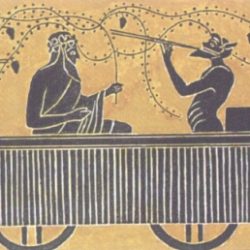