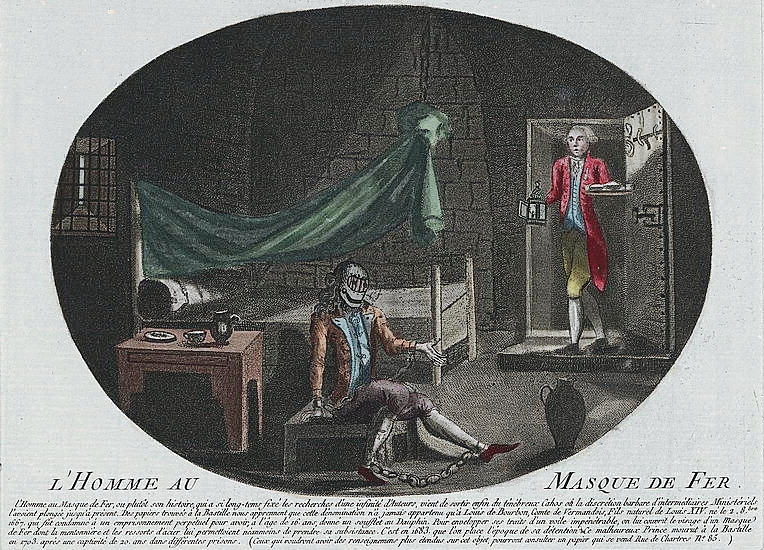 Made of iron yet even more mysterious than that: memento’s summer theme of masks must of course take into account the most famous and tragic of all masks.  The story involves a State secret that would become the source of historical and romantic conjecture.

The mask is as famous as the unknown man who wore it. “The iron mask” therefore nods to its wearer even though the term is misleading: the man behind the mask did not own the mask and remained a prisoner his whole life.
The facts are sufficiently proven and the enigma they surround is sufficiently intriguing to stir up lots of theories and imagination. A man was kept prisoner in a number of French prisons from 1669 to 1703. Only death would liberate him from his 34-year stretch in captivity. He was under the guard and responsibility of career officer and former musketeer Bénigne Dauvergne de Saint-Mars, who was the only person who was permitted to approach him, provide food and talk to him, but only about his immediate needs and nothing else. At the express request of Louvois, war minister of King Louis XIV, his particular cell was accessed via a number of doors, the keys of which were only in the jailor Saint-Mars’ possession so that the prisoner was unable to speak to anyone else. Anyone who spoke to this prisoner would be sentenced to death. Had the prisoner asked directly why he was in prison, he too would have run the risk of being killed. We know that during one of his transfers from one place to another his chaise was hermetically sealed. No one was supposed to see his face or any naked parts of his body. He had to wear a mask and gloves whenever he was out of his cell. It would seem that this prisoner was treated with respect and did not suffer any violence. However Saint-Mars’ avarice meant that he was kept in the most austere of conditions.
The man in “the iron mask” ended his days in the Bastille (prison) which was run by Saint-Mars, who had to continue to fulfil his duty by personally bringing him his food once a day. You could say that the jailor was just as much a captive as his unknown prisoner.  All his belongings were burnt after his death so there was no evidence of his identity.

It was so mysterious that we know that Malesherbes, a minister under Louis XVI, and then Napoleon, initiated investigations to find out the prisoner’s identity, most probably in vain. Writers and novelists fared much better and spread the legend from their own imaginations. In 1745, a book called Memory of Persia (which, like Montesquieu’s Persian letters, turned recognisable facts into an imaginary Orient) suggested that the prisoner was a natural son of Louis XIV. It was certainly Voltaire to whom we owe this legend of the iron mask, behind which no one would have survived for long. The mask was probably made of velvet in real life and covered the whole head. Alexandre Dumas devoted a book of inquiry to this enigma, which was inserted in his great novel The Viscount of of Bragelonne.

Over 48 names have been suggested for this mysterious prisoner including Louis XIV’s twin brother, or one of his sons with Louise de La Vallière, or an illegitimate son of Charles II of England, or Count Vermandois who slapped the Dauphin… And even such far-fetched theories as him being disgraced Superintendent Fouquet or D’Artagnan! Or even Molière!

According to more recent theories, it has been argued that the man in the iron mask might have been called Eustache Danger. But who was he? Again, there is much conjecture. It seems that this man was part of Duke of Beaufort’s entourage and was his servant.
Shortly after the Duke’s death in Crete, Eustache Danger who was to accompany him, reappeared in Dunkirk, where he was taken as a prisoner for the rest of his days. He was only about fifteen years old at this point.  It was suggested that the Duke, a cousin of the King,  a former rebel reconciled with the monarch, was still a trouble-maker and would have been assassinated under the orders of the King, and that Danger would have not only been the only witness but would have known too much. But, if it were a question of murdering a Duke, why was so much attention paid to his servant?
It was also thought that this man Danger knew too much about the prevarications of Cardinal Mazarin. Or that, in his role as a valet, he might have overheard conversations between Louis XIV and Charles II of England who might have become Catholic and asked for France’s aid against Holland? But again, would this have been enough to make this witness disappear? Keeping a man prisoner for his whole life without any contact with others is a complicated, risky and costly business.
But another assumption, as credible as it is terrible, has also been proposed: it came to light that from 1665 the Duke of Beaufort’s name appeared in Royal accounts as receiving sums of money granted to royal children. Perhaps one of the King’s children had been entrusted to Beaufort as a servant. Officially, this child who was around 11 years of age would have been captured during Beaufort’s campaigns against the Berbers on the Maghreb coastline in 1662.
Much likely, this boy would have been the natural born son of the King with an African woman – and we know that he had lovers of colour and that his children would have resembled him too much for this child not to have been recognised as his despite being physically marked by the genes of another people (problematic for the monarchy).  So, if this notion is correct, features such as skin colour would have had to be concealed – whilst retaining some respect for his royal origins, without forgetting his total innocence with regard to the situation.

A sad mask and the tragic destiny of a man condemned to live the life of a nobody, who could not talk to anyone except his jailor and who had neither a name nor a face, because blue blood cannot be black. His mask was not made of iron, the iniquitous and irremediable condemnation that befell him was the result of a heart of steel.