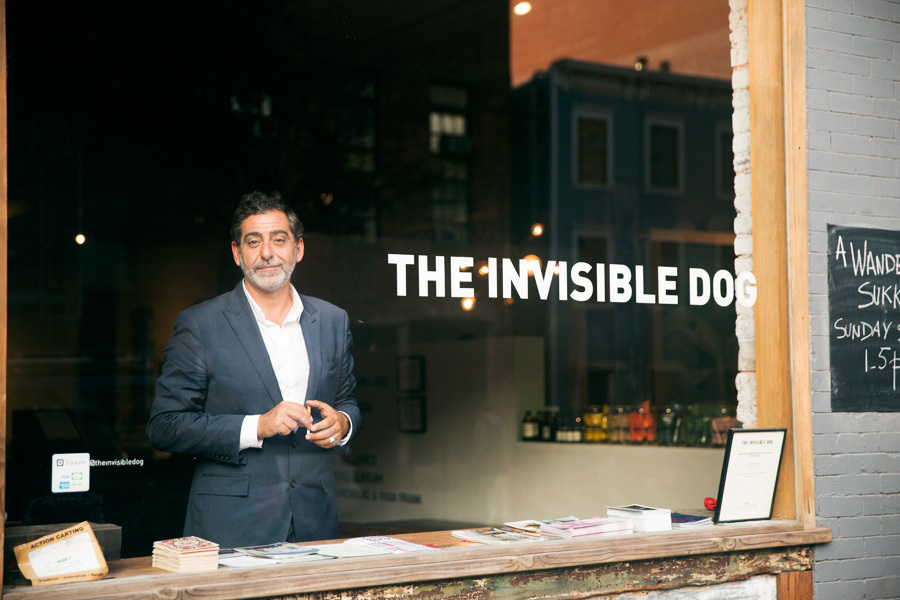 Invisible Dog is located in a hangar style building that has been revamped as a multi-disciplinary centre: a multicultural hub, a venue for artists in residence, artistic performances, a flea market, pop-up shops, a cultural focal point and a platform for stirring the head, heart and soul.

There is always something going on at 51, Bergen Street, nestled between the passages and breweries of Brooklyn. When Lucien Zayan stumbled upon the neglected building in 2008 and proposed that it be turned into an art centre to one of the owners Frank DeFalco, the latter asked: « have you got the money? » « No » « Me, neither ». Done deal. That was back in 2008. Since then Invisible Dog has proved to be a successful hub of the arts and a place for experimentation.

The name came from its previous life. The building dates back to the XIXth century when it functioned as a factory. At the tail end of the Seventies, a man called Zorbas introduced the joke of a dog leash without a dog from Europe. People thought that the dog was invisible. 150 employees later he was manufacturing belts, jewellery and the famous empty collar and stiff leash combo for walking your invisible Dada-esque pet. In 2005, he shut up shop leaving thousands of boxes packed with these leashes, hence the name of the building: Invisible Dog. Despite being advised to the contrary, Lucien Zayan decided to stick with the name. To help launch the venue at the beginning he held temporary flea markets in situ to sell off these crazy leashes. A few of the buyers decided to promote the place by walking their invisible dogs outside even if they looked ridiculous. Even today, when money gets tight, Zayan opens up a box of leashes for sale. At the time a leash cost 1$. Now it costs twenty dollars. Soon it will cost more than a dog!

Former theatre/opera director and assistant to Stephane Lissner at the Aix Festival before leaving for La Scala, Lucien Zayan dreamed up a key centre in a city where he didn’t know a soul. If there are now photo studios, shows, art exhibitions, installations, fairs,  performances, theatre shows, festivals (Crossing the line),  associations with FIAF (French Institute Alliance Française), spontaneous flea markets and inevitable parties here… it is all down to Zayan, the discretionary curator, visionary and hero of Invisible Dog, a buzzing meeting place and hub of activity.

Pop-ups (temporary shops) still crop up from time to time. In memory of the joyful bazaar that the diyptyque boutique was when it first opened its doors, diptyque has now become part of the Invisible Dog party. The diptyque bazaar  Collection 34 2016 was showcased there in June and will remain at the venue for a few months more.