At the beginning of the year, memento began unfolding its editorial line with toile de Jouy in order to venture into its oriental folds. This range of topics introduces the theme of the pleat.

Folding can only take place on a flat surface. The inflected, curving surface, barely undulating, is already worked on by the birth of a fold on a line that is still uncertain. The fold alters the smooth section.

What is the action of this singular alteration? The fold doubles the unity of a surface. When done, it folds back on itself as a soft surface. One section becomes two. The fold is both the act of divison and a border of reunion. And in its fold, the pleat hides in the shadow it creates.

Then the pleats are multiplied. The fold lines proliferate, separating as much as they connect. Fold after fold, the sections spread and the consequent deformations of folded fabric create more folds. Bending to the folding action, the resistance of the woven material operates against the folds, and this goes on infinitely to the limits of its extent. The unit is undone to infinity by divisions in two that unfold it into a labyrinth of pleats.

The fold of the fabric is the pleat. And it is a thousand folds invented and held together by stitches, double folds, ribbing, circles, wide or tight, pintucks, stitched pleats… The famous architect couturiers of pleats are Mariano Fortuny y Madrazo (1871-1949) and Madame Grès (1903-1993). Simone Pheulpin is today the artist of the folding technique by imitating in an unlimited way natural stones or roots where everything is apparent and structuring folds.

By folding a letter before sending it, we are sending a fold to be delivered to the recipient. Originally protecting written content, the fold, became, by metonymy, to designate the written thing, language itself. Because « […] the word always plays at the base of speech, it is only a fold in the immense fabric of speech. » wrote Maurice Merleau-Ponty, in his work Signes, which solicits this image about language: « Its opacity, its obstinate reference to itself, its returns and folds on itself are precisely what gives it spiritual power: for it becomes in turn something like a universe, capable of housing in itself those very things, – after having changed their sense!»

Because the fold always insinuates itself in the image to unfold the sense of a vision. Gilles Deleuze (1925-1995), for whom the fold is a concept used to analyse the thoughts of philosopher Gottfried Wilhelm Leibniz (1646-1716), quotes his favourite phrase from La Révolte des Tartares by Thomas de Quincey (1785-1859) : « During the next hour, when the gentle morning breeze had cooled a little, the cloud of dust grew that looked like huge airborne drapes, the heavy sections falling from the sky to earth: and in certain places where the whirlwinds of the breeze stirred the folds of the airy curtains, tears appeared…»

From the fabric to space-time via the words that form it, the fold leads the dance, makes us and clothes us, fills space and wrinkles time. 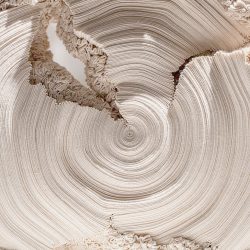