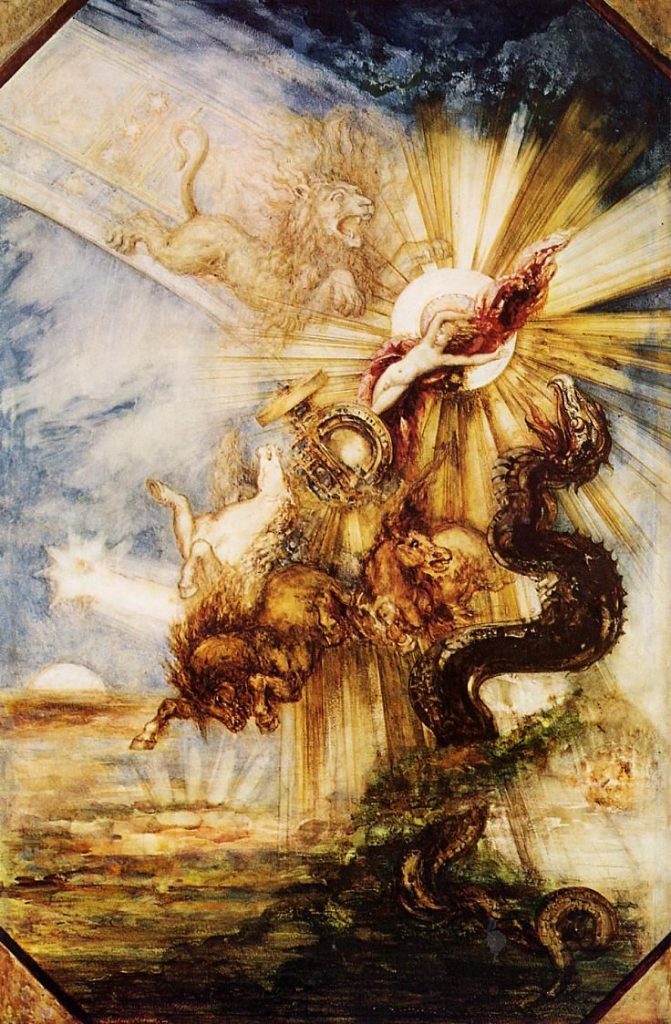 Metamorphosis indicates change. One thing turning into something else. The history of the world from its creation that initiated Ovid’s Metamorphoses has been a gradual process. The subject matter is not the difficult passage from nothing to something, rather than from a unity struggling against other things in balance with each other.

The notion of discordant unity rattles logic’s cage. You have to have more than one element for things to get jumbled up. And that’s the distinctive characteristic of primordial Chaos: the essential elements of earthly Nature – the land, the sea and the sky are present but in a single, shapeless mass. « The face of nature was one »: this primitive indistinction is uniform, but unstable, moving and inconstant. No light in the air. No guidance  possible. It is a cloudy broth of sticky elements « germs in discord with ill-connected things. » No heads or tails, just a tangled yet unified mess. Nothing is discernible, nothing can be named. It is not possible therefore to personify different elements as they would be later, with Titan Hyperion, father of Dawn, the Sun and the Moon and all the stars, and the name of the Sun itself or Phoebe « the luminous », the Moon or Poseidon and his sea-goddess spouse Amphitrite, rulers of the Oceans. Without names, no narrative is possible. No intelligibility in this topsy-turvy place. And it is this narrative of mutations that Latin poet Ovid (43 BC.-17/18 AD) recounts in a long poem about the great story of Humanity.

The mother of all metamorphoses, the very first transformation that will separate the elements, goes without question. The poet’s language reveals it but cuts no corners: was there outside intervention involved? Because in effect « A God stopped the conflict ». Or was it a process that stemmed from within the chaos itself, the God being assimilated with « nature in progress », or « all-powerful nature » according to translations. Intellection demands to hear the Latin, this is indisputable, but the Latin is lost in the process. Was this God on his or her own, or were there others? « Whoever He was amongst the Gods » said Ovid, but if he came before them, there would be a natural monotheism preceding the divine affluence in the pipeline. He then invokes « God » – is he the only one or this one? – and he goes on « the creator of the universe, the origin of a better world »… The origin keeps its secrets. The fact remains that the historical process of metamorphosis begins with this act of separation and deployment that distinguishes things by locating them in specific places and links them together. Here is the element of fire above the world in the sun, above the air, then the earth as a disc, and finally the waves swelling with the breath of the winds that define the shoreline. Once these fixed frontiers have been laid down, then the stars « hidden for eons under the mass that squashed them suddenly begin to swarm in the night skies » and « the stars and shapes of gods » begin to occupy « the celestial court »: stars being live entities. In book II, the nymph Callisto, a beauty amongst beauties, would become the Great Bear constellation.

This long epic recounting the metamorphoses of mortal humanity and of passionate and vulnerable gods arises from a formless uniformity. And the thing that distinguishes humanity from animals is that its creator Prometheus « gave mankind a face and ordered humanity to contemplate heaven and our faces up towards the stars. »