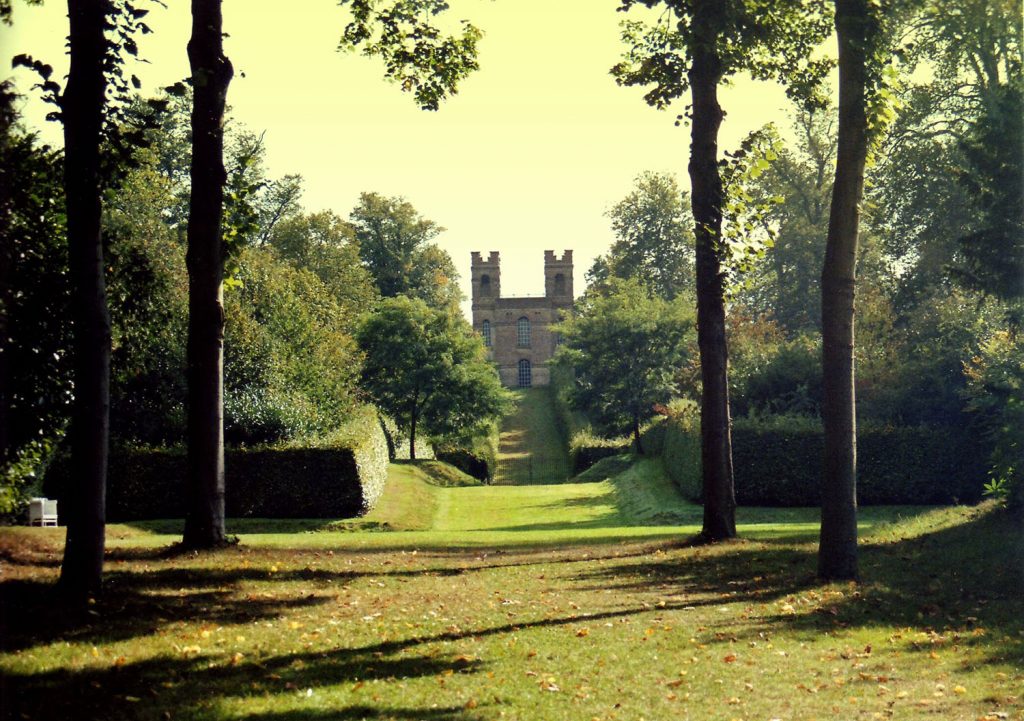 Gardens were all the rage in XVIIIth century Europe. The style of landscaped garden in England illustrates, both metaphorically and legitimately, a leaning towards the aesthetic aspiration of European culture that prefigured the romanticism that was to follow.

The gardens of the Grand Siècle, commonly known as ‘French style’ gardens, extended the architecture of a castle by combining geometrically patterned topiary (clipped hedges and bushes) with an uncluttered horizon, flat surfaces, clean lines and symmetry as well as enclosed ponds with fountains to demonstrate a certain degree of domestication of Nature.

English gardens, however, presented a bucolic and rural landscape that carried the gaze forwards and outwards, took the walker by surprise and got the mind dreaming. These rural landscapes were inspired by the evocation of Antiquity. They evolved as the century progressed into a horticultural art form that idealised nature and organised the land into a succession of views that provided a distraction for both the eye and the heart.
Therefore the composition of such gardens favoured asymmetry, rugged areas, woody outcrops, caves and waterfalls, theatrical precipices, streams fringed by weeping willows, sloping meadows with a determined vagueness of contours that blurs the edges of the view, inviting you to take a stroll or to stop for a moment to soak up the feelings provoked by the landscape. The quiescent mists of the countryside are propitious… A baroque element allows certain visual effects to be eliminated and the opportunity to playful with perspective, such as introducing an pathway of artificially parallel trees  to create the illusion of depth and to highlight a lovely little folly right at the end.

The model of this art is painting. “Poetry, painting and the art of garden landscaping […] will be regarded as three sisters or like the three new Graces that dress and adorn Nature” wrote Horace Walpole (1717-1797). The word ‘pittoresque’, that typically characterises these works featuring an imaginary nature, is the French spin on the English word “picturesque”, meaning from an image or painting.

This new style of gardening, the main inventors of which were landscape designers Stephen Switzer and Batty Langley, as well as writer Alexander Pope, peaked with William Kent and Lancelot Brown. The style would become a bit hit throughout Europe. Marie-Antoinette had her English garden installed at the Trianon. It inspired Parisian public gardens created during the Second Empire during the second half of the next century.

This new horticultural trend with its dense clumps of plants, variety of colours, perennials and climbing plants, hardy species, shrubs, protective hedges and thickets organised Nature to such an extent that it was sufficiently abundant to entice creatures to inhabit the space. It was the beginning of the art of the modern garden that continues to the present day, along with the plants that were used to create it.

English landscape gardener Gertrude Jekyll (1843-1932), who was linked to the Arts and Crafts movement and Irish writer and gardener William Robinson (1838 -1935) created a new landscape that lives on today in English cottage gardens and in plenty of public gardens around the world. Robinson is believed to be the ancestor of the New Perennial Movement with Mien Ruys the theoretician of the latter and Piet Oudolf its eminent representative.