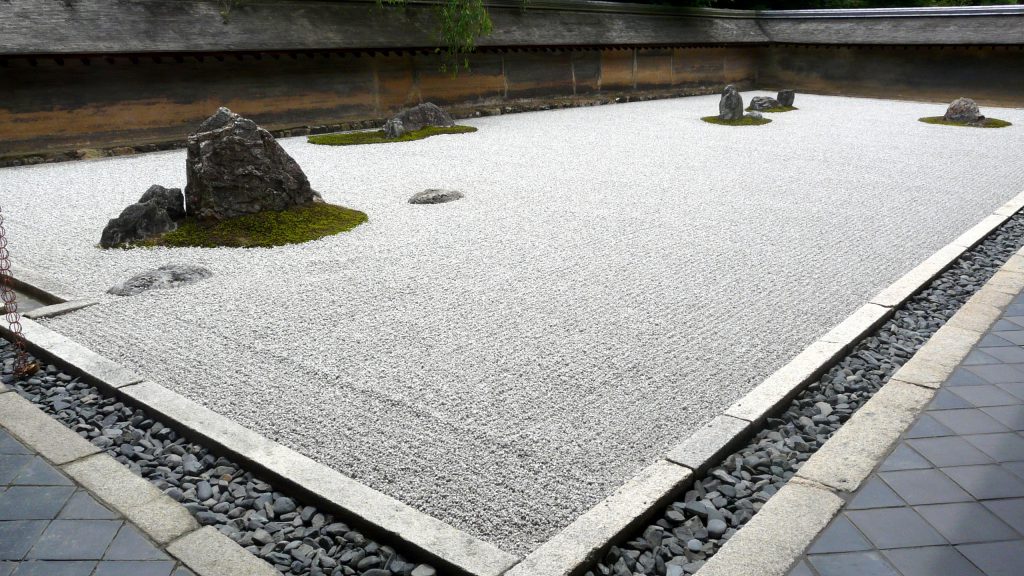 At the Zen temple of Ryōan-ji in Kyoto there is a rectangular rock garden breathing silently into the infinite. To evoke this Ryōan-ji garden we would need to speak in whispered tones and gaze at it with quiet eyes (quelling any inner turmoil) so we can breathe in the rocks and pebbles of this dry landscape.

This garden is set out as a rectangle containing fifteen boulders surrounded by white gravel and framed by a semicircular clay wall. Two pale boulders emerge isolated from the sandy area, whereas the other darker rocks form five clusters encircled by green moss. The pale, sandy section is meticulously maintained. The wall, topped off with a little sloping roof, is made from a mixture of clay and rapeseed oil to mirror the brightness of the white sand. Although it seems to be flat, in actual fact the garden slopes at a slight angle for drainage. The slope of the wall along with that of the garden create a slight twist on perspective that increases surface depth by 248 square metres. Dating back to the XVth century, when the temple was revamped, this garden may actually be even older than the temple. However no-one knows for sure who designed it. It is a dry landscape rock garden with minimal vegetation that is Zen in nature. Zen is a Japanese term derived from the Chinese word Ch’an and Sanskrit word Dhyan, meaning meditation. In Buddhism this favours Awakening by means of seated meditation (zazeri) and physical work done with mindfulness (samu). A definition that is schematic in nature, for sure.

Schematic, this garden is so bare it causes chins to wag rather than fall silent. This “scorched landscape” (Paul Claudel) is so abstract that the mind wants to find some meaning at all costs; here there is a sea of sand with waves that have been meticulously raked, over there there are islands and mountains, perhaps a cloud here, this anguished rock must be a crane (symbolising bliss) and the other one a tortoise (symbolising long life). The symbol is legible: one of the supposed ‘fathers’ of this garden, Tessen Sôki, wrote: “The mound of an ant-hill rises as high as the Five (holy) Mountains and the hole is where the frog hides in the depths of an infernal world.” But we are also aware of the tongue-in-cheek dialectic of Zen masters… The number 15 could corroborate a symbolic interpretation, in that the best known anecdote about this garden is that one can never sees all the rocks at one time as one always remains hidden from view because fifteen is supposed to symbolise completeness in Buddhism so to see all the rocks would mean having reached a state of satori (Awakening).

The oldest known gardening manual, Sakuteiki, dating back to the XIth or XIIth century, kicked off with a first chapter devoted to “Ishi wo taten koto” (The art of arranging rocks), at a time when Japan already had a thousand years of gardening tradition under its belt (niwa, a space free of contamination). But the variety of Japanese gardening genres during different empires, fashion trends, religious inspiration – original Shintoism, Buddhism from Korea, Zen – continental influences (particularly from China) would create a syncretic coherence, a style: connoisseurs maintain that you can always see a staging of the sea from which mountains appear, that there are fluid and stable elements, fleeting movement and the immutable eternal.

However, a less well-known fact brought to light by François Berthier is that at the end of the Muromachi era (1333-1568), the Ryōan-ji garden was famous for its cherry tree… So, leaving aside the noisy flurry of speculation, one would be well inspired to slowly breathe the ascetic rarity of the elements and the mysterious equilibrium that connects them, trying to appease the profusion of senses so to let oneself be taken by the enigmatic calm of this rock garden. Or else, a selfie with Ryōan-ji in the background is sure to tick all the boxes. 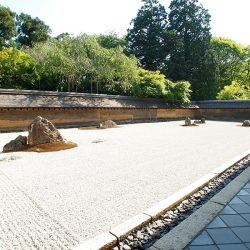 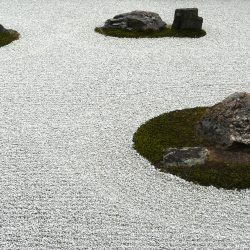