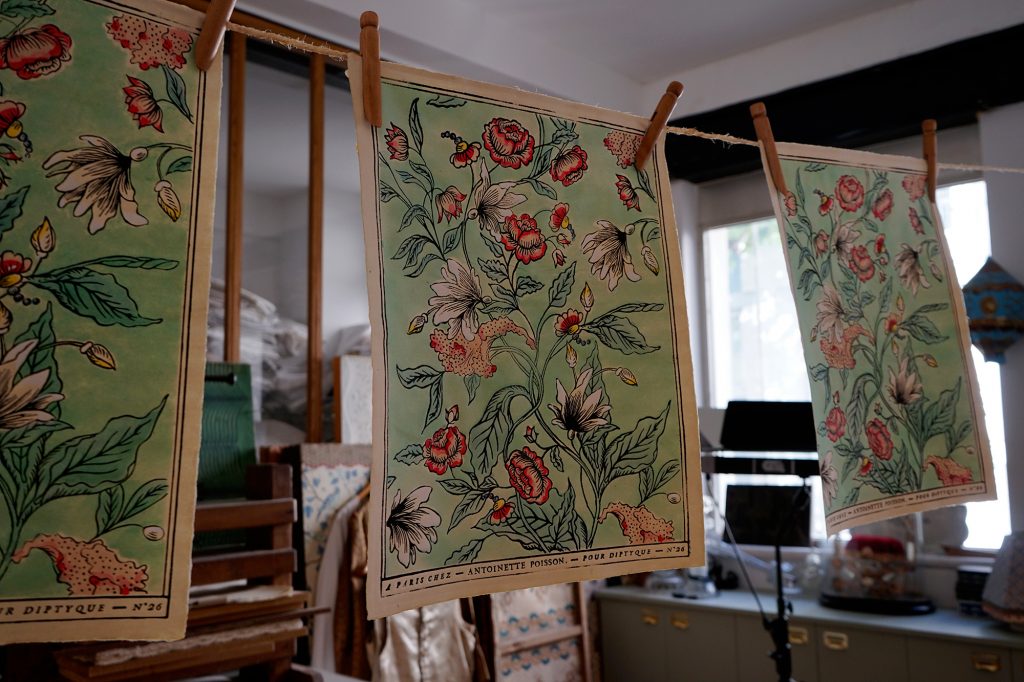 diptyque Rosa Mundi, candles, eau de toilette, solid perfumes and scented ovals, are in bloom! The roses therein, tinged with blackcurrant, bergamot and lychee, scent the air with every shade of efflorescence from the greenest sap to the most purple of reds. But they also bring colour to an exclusive sheet of ‘Domino’ printed paper.

It is a tradition at diptyque to begin the year with a Rose collection. A deliberate and rather ingenious move that sweeps away the trivial. The rose is the flower of love. A rose always blooms like every first love story. And all love is a world in itself. Hence Rosa Mundi.

The composition of Rosa Mundi marries Damascene and Centifolia roses. The latter is the product of several species including the Gallica rose that is no longer used in perfumery and which we have given the same name as that of the collection: Rosa Mundi by diptyque nods to Rosamund Clifford and the love story between her and King Henry II of England, a story that blends fact and legend that we shall explore later. The rose from Damascus, the Damascene, is harvested in May in the mountains of Ispartha in Turkey; the May rose, Centifolia, known as the hundred-petalled-rose due the profusion of the latter, is grown in the Grasse region in France.
The aim of the fragrance of Rosa Mundi is to bring back the diversity of scent of roses in bloom. Complementary aromas, not only of the aforementioned blackcurrant, bergamot and lychee, but also cedar, musk and honey have been added to heighten the head, heart and base notes of the rose and its abundant qualities of freshness, greenness and fullness.

The Rosa Mundi collection comes with a sheet of ‘Domino’ printed paper. This paper nods to the tradition of blank paper that was hand painted/printed to cover books during the XVIIIth century. This practice and artisanal skills-base would have been lost today, were it not for a few scholarly, expert craftspeople and their passion for the art. diptyque certainly recognised a bond with three artisans working at A Paris chez Antoinette Poisson, in that they are similar to diptych’s three founders who were also friends, artists, illustrators and graphic design enthusiasts. A Paris chez Antoinette Poisson has produced two illustrations, one with roses, the other patterned that will be sold as real ‘Domino’ printed paper in our shop, as well as letter paper to be folded into an envelope and which, of course, will feature on all Rosa Mundi packaging.

The glass candle container is adorned with paper featuring ‘Domino’ prints. The long fibres of the paper are thought to filter the flame of the candle and radiate a soft glow. The solid perfume is called Eau Rose. The Rosa Mundi eau de toilette is similar to vinaigre de toilette and is called Eau Dominotée: its composition with its fine note of patchouli marries well with textiles and this means it has a number of uses – on its own, as a room freshener or to scent bed linen. Just like the scented oval, perfect for fragrancing wardrobes when slipped between folded bed sheets.

Rosa Mundi is therefore a complete collection that encompasses flames, water and wax, nobly illustrated with the skills of a rare craft and therefore destined for multiple uses. The collection intently fuses many aspects of the story of diptyque, from illustrative and decorative arts to perfumery.