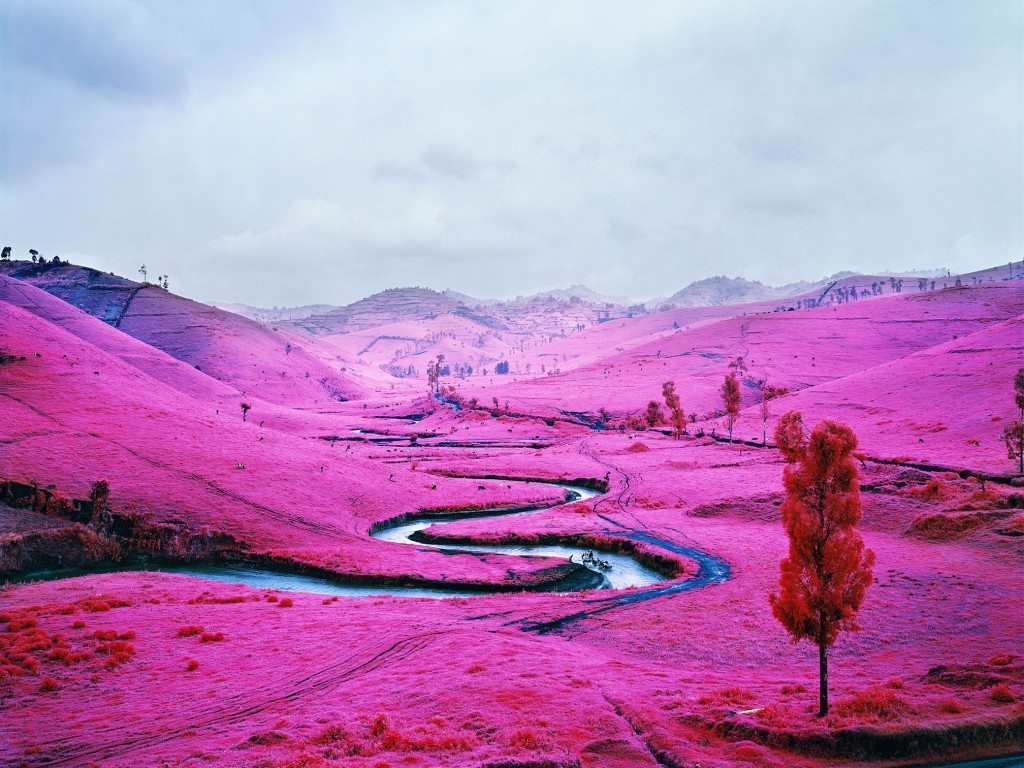 Open a parenthesis just for a moment and look at the world in a different way, let the light and colour fill us with hope, and modestly make visible that which is not. The landscape unfolding before us is speckled with pink, purple and magenta as far as the eye can see; an entire panorama straight out of a fairy tale. We are entering a different world along this meandering river that has somehow remained silvery. A strange tree, shrouded in a crimson canopy of leaves stands proudly before us in the foreground, those little black and white dots spreading out in the distance are the only signs of life in this vast expanse, this purple landscape whose beauty we would love to enjoy unreservedly.

This immersion of the senses is the work of the Irish photographer Richard Mosse, born in 1980 into a Quaker family. He studied in London and graduated in Fine Arts from Goldsmiths University and photography from the Yale School of Art. Today he lives in New York. Richard Mosse worked on numerous conflicts throughout the world before settling on the Democratic Republic of the Congo and particularly the South-Kivu region, in the grip of fighting between rebel groups, which he managed to infiltrate and rub shoulders with for two years. The artist has reinvented war photography by using a 16mm infrared film (Kodak Aerochrome) used by the US military in the 1940s, that has the peculiarity of being able to detect camouflaged uniforms. It is the chlorophyll in plants that reflects light above 500 nanometres and transforms green into purple. Infrared photography became popular in the 1960s when artists like Jimi Hendrix used it for their album sleeves. These pictures with their acid colours reflect an aesthetic quality particularly suited to the psychedelic wave of the time. Richard Mosse also uses it, not merely for its obvious aesthetic quality but to make our senses react by challenging us to look at the world more intensely.

The Enclave was first presented in the Irish Pavilion at the 55th Venice Biennale in 2013 – a work for which Richard Mosse received the Deutsche Börse awarded in 2014. It is an installation of six screens and six audio channels placed in a room that the public can only reach through a dark corridor as if it were a metaphor, bringing spectators into a conflict they were unaware of. Visitors are obliged to move around to see the screens on which these images appear randomly, pictures of surreal beauty that plunge us into a scene of profound suffering.

Richard Mosse’s work is a real challenge to traditional photography and journalism and to the system that obliges you to believe what you see. Pleasure and seduction become the weapons the artist uses to disturb our consciousness. He gives us images of beauty to speak to us of pain and of danger.

Nature is the subject of all the representations and interpretations. Countless attempts have been made to capture it, reveal it or transform it, as when Land Artists, like Richard Long and Robert Smithson, tried to use their experiences to constrain it by acting on the environment. The dialogue begun by Richard Mosse is quite different. It traces a pathway between the landscapes of the Congo and the countries in which we live, a bridge between him and us where beauty unfurls to allow us to experience the mystery of life. Beauty that grabs us, that makes us stop the rush of our daily lives, nature that feeds us and fills us with unsuspected strength to cope with real life, with irony and with ill-being. La vie en rose by Richard Mosse gives us the freedom to be able to look, think and especially to react to a world whose reality is sometimes far from being uniformly rose.

Elodie Morel is Director for photographs department at Christie’s Paris.