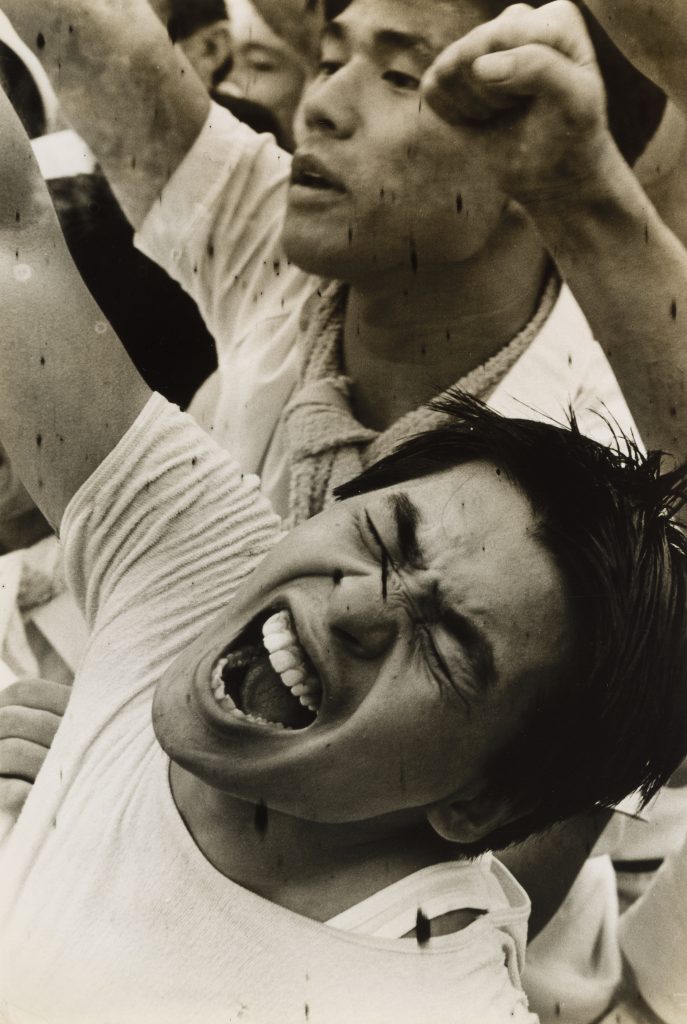 Largely ignored in its time, gritty underground magazine Provoke, published 1968-1969 is now recognised as a major milestone in the history of photography.

The anti-establishment group of photographers, philosophers and poets polarised the best of Sixties Japanese photography, promoting the printed image in all its forms (press, books, magazines). As both a manifesto and collective work, Provoke assigned photography with a new role in response to the tumultuous violence that shook Japanese society in key work by its members: Takuma Nakahira (For a language to come), Daido Moriyama (Accident), Yutaka Takanashi (Towards the city); and echoed the emergence of Japanese performance art and its great exponents: Natsuyuki Nakanishi, Jirō Takamatsu, Kōji Enokura, Shuji Terayama….

The publication of only 3 issues of Provoke came at a time of disillusion: the end of a decade of protests that were deemed sterile; of activist photography and the collective fight giving way to a lone photographer wandering aimlessly in an urban environment

For the members of Provoke, it was now necessary to remove photography from its ideological and factual straitjacket and release it so it could document a subjective, fragmented and explosive view of the world. Because the complexity of reality is elusive and contradictory by its very nature so photography should renounce its power of transcription in favour of an out-of-focus, confused aesthetic. Becoming « clairvoyant » to achieve « something that comes before form ». (Kōji Taki)

The language therefore becomes raw, blurry and grainy (are, bure and boke in Japanese) pushing photography to the fringes of legibility. The blurriness undermines the power of the single image. Juxtaposition, collage and repetition challenge the authority of the sequence and narrative. In the context of a society where consumption was obsessive; where the profusion of media images makes all reality virtual and where art itself is instrumentalised, the unfeasibility of representing and honouring absurdity and favouring chaos turns into the only possible gesture.
Provoke therefore showcases the complex connections between photography and language, art and resistance without providing any answers.

« These days, at this precise moment, language is in the process of losing its concrete foundation – in other words, its reality –, and is floating in space. As photographers, we must use our own eyes to capture fragments of this reality which can no longer be grasped by existing language and we must actively promote the documents that can translate language and ideas. This is why we were bold enough to give Provoke magazine the subtitle ‘Provocative documents for thought. » — Takanashi, Nakahira, Taki, Okada, preface to Provoke 1

Diane Dufour was director from 2000 to 2007 of Magnum Photos. She created LE BAL in 2010 with Raymond Depardon, contemporary space dedicated to image-document under all its forms (photography, video, cinema, new medias).