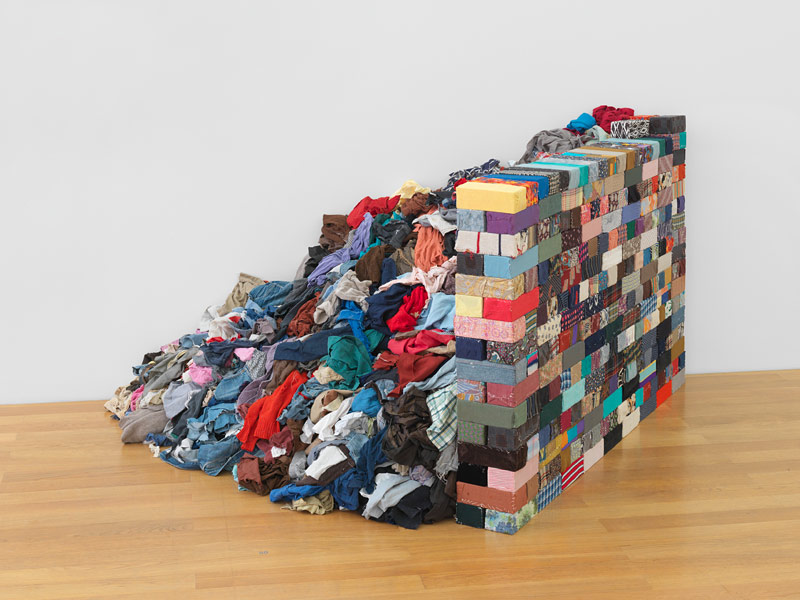 Between 1967 and 1968, during a particularly turbulent political and cultural period, Italian artist Michelangelo Pistoletto created a series of sculptures that would prove decisive in post war history of art. We are talking about Muretti di Stracci, or literally « little fabric walls ». These walls were created from bricks individually wrapped in coloured fabric, all different, creating multicoloured constructions, the function of which was not to fence a space off nor prevent passage but just exist as autonomous works of art.

When he worked on this series Pistoletto was already a renowned artist in Italy. From the early Sixties he had become known for his mirror-based work, in which the viewer sees himself or herself whilst contemplating the piece. The Muretti di Stracci were a turning point in his work. There was no question of painting here: tubes and palettes have been replaced by the chromatic amplitude provided by the diversity of coloured fabric bricks. As rags from the triumphant consumer society of the swinging sixties this fabric appears banal and insignificant, making it difficult to grant artistic status.

And the same goes for the bricks, for it was not their first foray in the plastic vocabulary of contemporary artists. In 1966, American artist Carl André had already used them in his sculptures but if this minimalist artist had used them for their elemental structure and formal purity, Pistoletto also chose them for their political punch. At that time there were protests going on in the four corners of a Europe divided by walls that were both real and ideological. And Italy was not immune to student protests that would result in cobblestone barricades in France.

So, Muretti di Stracci laid one of the first stones in what art critic Germano Celant would dub Arte povera. More of an attitude than a movement itself Arte povera drew a number of artists to Turin including Jannis Kounellis, Mario Merz, Luciano Fabro, Alighiero Boetti, Giulio Paolini and Giuseppe Penone to name but a few – all of whom were united by their critical approach to consumer society and cultural institutions, rejecting both American Pop Art and European abstaction. A poor art therefore that resorted to basic raw materials – sand, wood, terracotta, coal, plant material, tobacco, tar, rope, hair, burlap etc. – to better anchor itself in real life. An art in tune with the era that gave birth to it – radical and subversive and driven by a spirit of revolt as well as poetry.