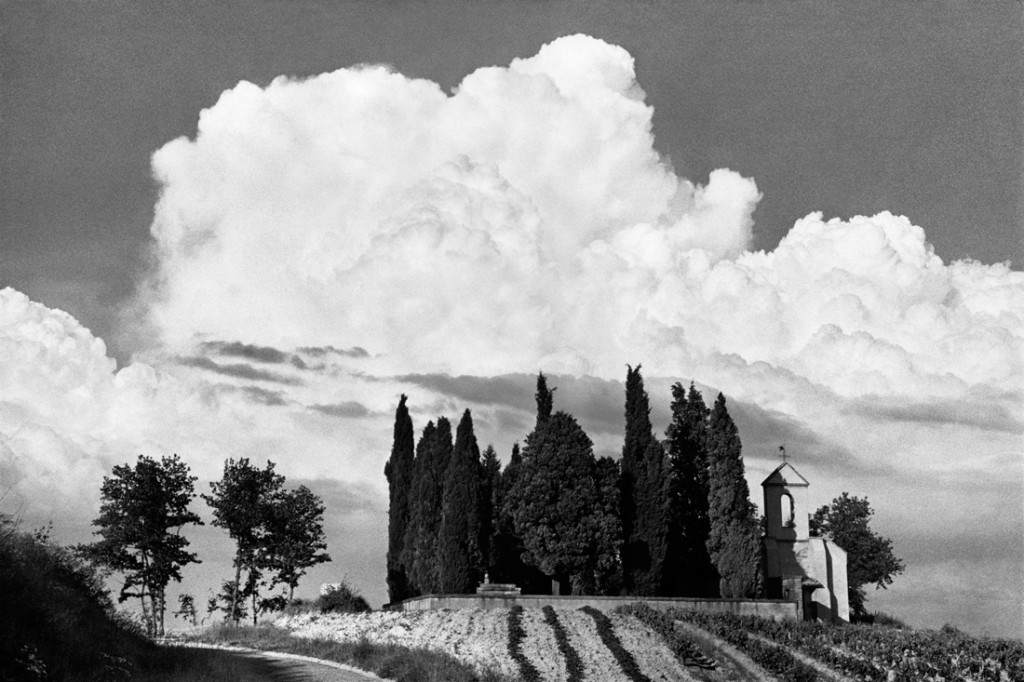 An imaginary geography, by Virginie Chardin

For Pierre de Fenoÿl, photography is the art of receiving, unlike painting and literature which are arts of extraction. To attain a receptive state he walked extensively, asserting that this was the only real    « school of photography. »

In 1984, DATAR (Inter-ministerial delegation for regional planning and regional attractiveness) launched a photographic initiative inspired by the 1851 Heliographic Mission to establish an inventory of French landscapes and called upon the services of Pierre de Fenoÿl along with Gabriele Basilico, Sophie Ristelhueber and Christian Milovanoff. A light bulb moment led him to focus on the Tarn area for his first shoot. It was here that he ended up snapping the majority of his images. Pierre de Fenoÿl wandered around the countryside for days on end, almost spellbound by the foliage, trees, wind, rolling landscapes and sky. « On good days the clouds were exactly where I wanted them. Oh what joy when that happened! Who doesn’t dream of playing with clouds! », he wrote. His landscapes are devoid of human beings or modern industry despite the fact that human presence is palpable via crops, monuments, gardens, cemeteries and religious buildings…

Pierre de Fenoÿl was on a quest for the spirit of the place and traces of history as well as the furtive appearance of an Eden or of a garden of delights that occasionally harboured a tormented soul despite the gentle nature of the countryside. Assisted by his wife, who printed his photographs, he used the same sombre style previously used for his Parisian and Egyptian landscapes, creating a hiatus in time that makes it tricky to figure out whether you are witnessing the beginning or the end of the world.

For Pierre de Fenoÿl’s main obsession is time. « On this journey, which is more initiatory than aesthetic, the most important thing is to watch time passing by rather than passing your time watching…» because the camera « is an inner eye that transforms the time that is ticking by into a glimpse of eternity ». « I am not a surveyor, or a visionary, he says, nodding to Cartier-Bresson, I am and want to be a chronographer in search of the present moment. »

At the beginning of his career this spiritual dimension was barely discernible but that was to change over the years. « My meanderings through the world of photography made me veer firmly towards a religious and almost mystical perception of photography », he scribbled in 1983. This existential search for presence in the world is particularly evident in photographs he took of his own shadow in the landscapes he explored or in those strange images of the Châteliers estate in Anjou that seem to be inhabited by spirits and memories. Furthermore, it is significant that Pierre de Fenoÿl’s first show in an institutional exhibition was at the « Photographic Self Portraits » exhibition in the Georges Pompidou Centre in 1981. Pierre de Fenoÿl went on to create numerous self-portraits, always as shadows cast on the landscapes he was photographing.

The originality of these images meant that he featured in most of the exhibitions devoted to French School of Photography in the Eighties. The latter focused on images that were in black and white; introspective and autobiographical. Members of this school included Arnaud Claass, Magdi Senadji, Bernard Plossu, Daniel Boudinet, Keiichi Tahara, Jun Shiraoka, Christian Milovanoff, Holger Trulzsch and Denis Roche.

Pierre de Fenoÿl suddenly collapsed and died of a heart attack on the 4th September 1987. He left behind a short but dense body of work.

Pierre de Fenoÿl’s work has been rediscovered by art gallery Le Réverbère, thanks to a committed and passionate collaboration with his family. It will be displayed in the booth of the gallery during the next Paris Photo edition to be held in November 2016, as well as in a collective exhibition named Notre beauté fixe, which will celebrate the 35th anniversary of Le Réverbère in Lyon, as of January 2017.

Virginie Chardin is the curator of the Pierre de Fenoÿl exhibition at Château de Tours, an annex of Le Jeu de Paume museum in Paris.