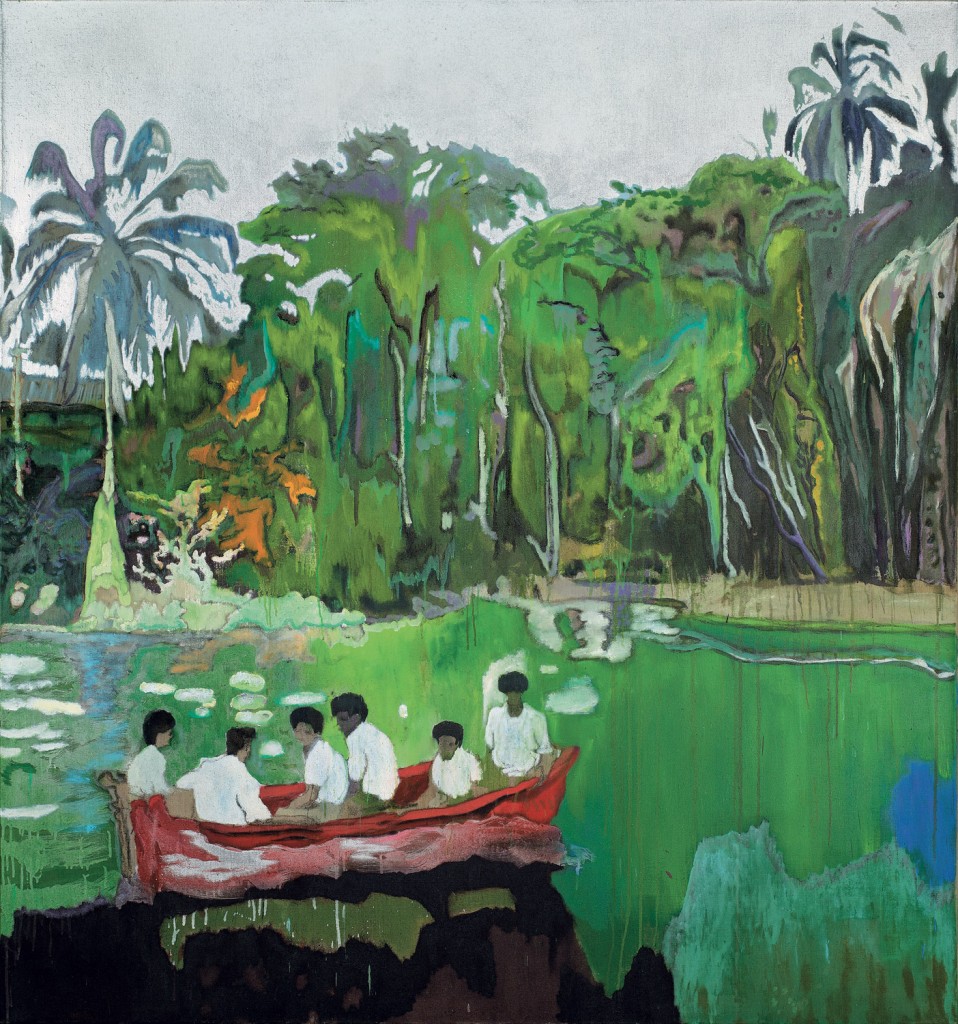 A bright red boat glides gently across a lake fringed by dense jungle. No eddies and whirlpools here, the boat skims slowly through a flat green and brown wave. On board there are six mixed-race men in shirtsleeves. None appear to be looking in the same direction; they are frozen in the moment, almost absent from their physical selves, stunned. The air is saturated with light and humidity. The vegetation surrounding them is lush: thick foliage with mahogany highlights, purple-tinged palm trees, gnarled vines tumbling from tree trunks. You can almost smell the warm and toxic scent wafting from this blanket of vegetation; you can almost hear the noises suddenly erupting from it and disrupting the boat’s silent progress. The painting gives off the same clammy indolence experienced during a feverish dream. Even the colours of the painting themselves seem to be sweating in the sweltering heat of this tropical scene.

Born in Scotland in 1959 Peter Doig kicked off his artistic career in the Eighties, going against the current as painting at that time was being contested as a medium. In 2002 he decided to return to Trinidad where he had spent some of his childhood. This is where he painted Red Boat (Imaginary Boys). You can’t help but think of Gauguin, who had left for Tahiti and then the Marquesas Islands a century earlier in search of pure luminosity and new colours. Just like him, Doig found the tropics fertile ground for pictorial exploration.

Using an exuberant palette – dazzling, neon-bright and in your face – he portrays places that are both magical and tinged with a certain melancholy, evocative of a time that has gone forever but no one can quite pinpoint. His landscapes are awash with a hazy atmosphere that makes them tricky to define, somewhere between the strange and the familiar, past and present. These are worlds suspended in time, as if experienced in a dream, dotted by slightly ghostly beings: a solitary figure gazing at the reflection in a lake in the middle of a mysterious forest, the back of a man walking to an unknown destination, fleeting silhouettes that can just about be distinguished between flakes. These characters seem to merge in the vastness of the natural world that surrounds them; a feeling that is accentuated by the oversized canvases used by the artist. Sometimes the places have been deserted but the absence of man seems to resonate in nooks and crannies of his paintings, for example in the series of work Doig painted of the abandoned housing block built by Le Corbusier at Briey-en-Foret.

Like Hopper’s American landscapes and Hammershøi’s Nordic interiors, Doig’s paintings exude a slightly ominous undertone. Working mainly from archival photos, the artist touches something deep within us, evoking long lost memories and forgotten images. His canvases are on the fringes of the real and the imaginary; they remain with the viewer for some considerable time, imprinting the retina with a shadowy, existential anxiety.

Paul Nyzam is a Modern Art expert at Christie’s.