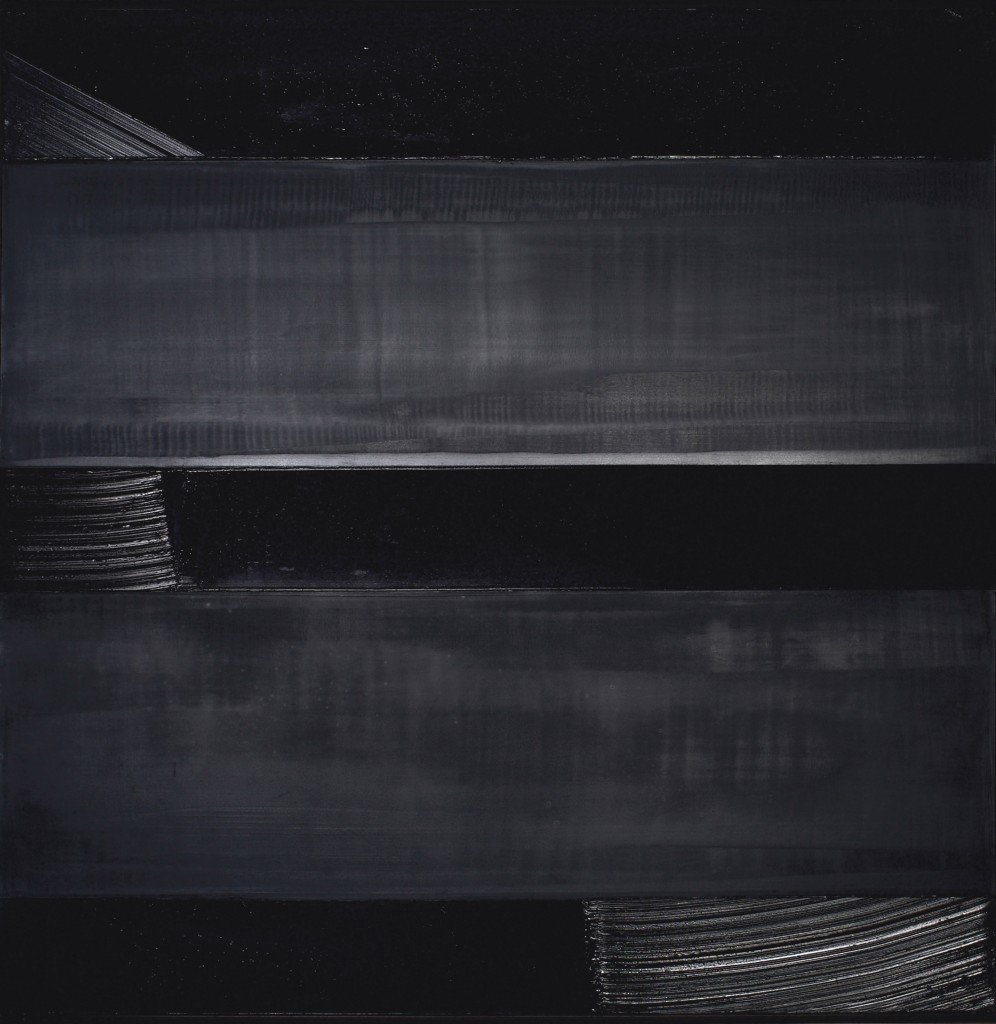 “One day in January 1979, while I was painting the black color invaded the whole the canvas.” These are the words with which Pierre Soulages starts the story of the day when his painting led him to a decisive direction that would forever spread throughout his work until his most recent creations. Master of the post-war abstract-painting years and already being the author of three decades of research and experiments, Soulages had had his work widely exhibited around the world and until then had been using black only for its power of expression as opposed to other colors – the white canvas sort of held in reserve, or the reds, the ochres, the blues on which his compositions were based. For the first time at the beginning of 1979 black is alone everywhere on the canvas. “The next day when I showed it to Colette [his wife] her reaction made me understand it really was another form of painting.” This he gave a name to sounding like a signature – outrenoir.

“Outre” means beyond, therefore outrenoir means beyond black. Like “outre-Manche” is for across the Channel or “outre-Atlantique” for the other side of the Atlantic, outrenoir invites us to cross a border and venture into a foreign country and there, in this ‘elsewhere’ discover how black, while saturating the surface of canvas to the point of excess, brings a completely different reality and a new thinking realm. With outrenoir the color is not on the canvas anymore, neither does it come to the surface from some depth as it happened with his paintings from previous decades but spurts out of the modulations of light upon the unevenness of the surface.

The Soulages paintings produced after 1979 cannot be considered as monochromes for the same reason. They invite the eye to catch the infinite variations of texture which set the pace on the surface of the painting – at times smooth, at times striated, swept in certain directions by the sweeping of the blade or brush or, in other areas carved by short and agitated grooves within the thick paste of the painting. All of these irregularities hook or reject the light depending from where the viewer looks at the painting making the black appears dark or light, matte or sparkling, anthracite grey or nearly white.

Therefore, like a ‘mise en abyme’ (a mirror image) of a observer’s condition, as the painting is never the same depending on where it’s looked at from and depending on how the light sheds on it, there will never be an unique, conclusive and indisputable understanding of this painting. On the contrary, the painting appears to be a space that is built and deconstructed all the time. This is probably the most thrilling experience which Outrenoir invites everyone to – that of their radical solitude in front of the piece they’re looking at.