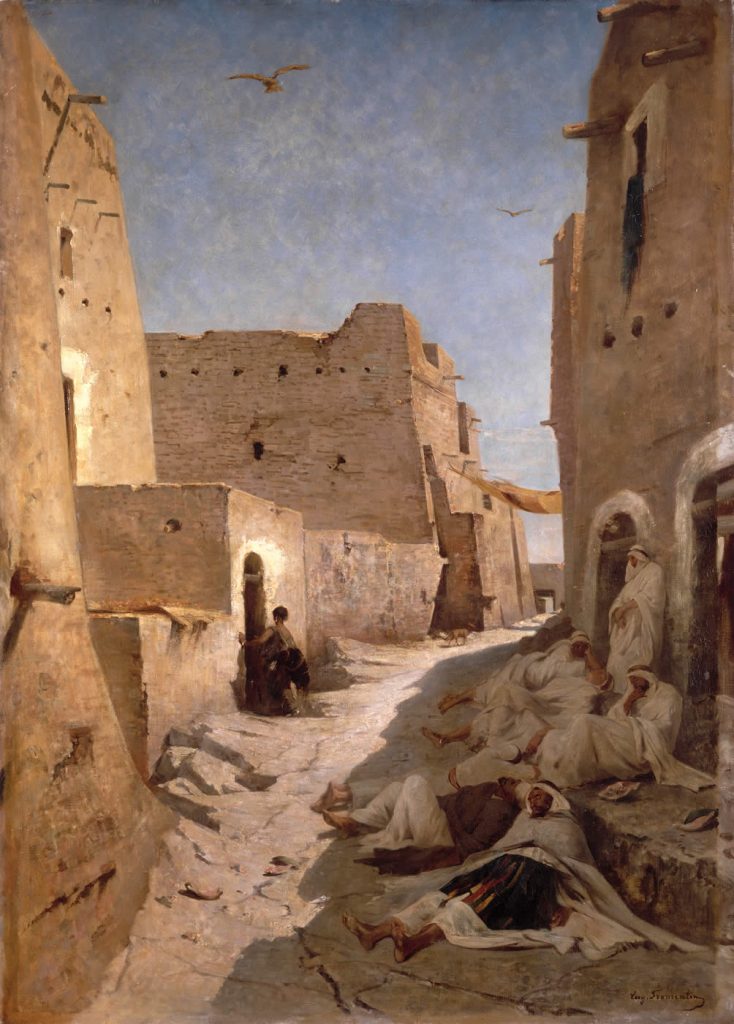 When not referring to the study of Oriental languages and civilisations from Anatolia to Asia, Orientalism nods to a nineteenth-century European artistic sensibility. And its orient is the imaginary shore of romanticism in Arabic and Ottoman kingdoms from Spain to Baghdad.

In the XVIIIth century, the Muslim east is often evoked in stories and works of art such as Montesquieu’s Persian Letters or W.A Mozart’s Abduction From the Seraglio. This orient and its turqueries (orientalist fashions) are a pretext for exoticism as well as an evocation of a different civilisation that puts European (and allegedly universal) culture in touch with different ways of life, flavours, colours and an alluring intensity that diverts the attention away from its own, equally powerful customs that are, nevertheless, considerably less exotic.

This curiosity about the East was sparked by French General Bonaparte’s expedition to Egypt at the turn of the nineteenth century followed by the French military invasion of Algeria in 1830. These acts of war had profound artistic implications.
Ethnographical accounts became jumbled up with first hand experiences, the discovery in Egypt of ancient cities buried under the sand, Arab people with strange yet European-related customs, and then there was all this luminous light, graceful femininity (so proud and uncompromising), public baths, gardens with tinkling fountains, frisky horses, a warmth conducive to wantonness, harsh rulers, haughty warriors, slave markets and Ottoman decadence… finally a whole vibe that would infiltrate and blow artists’ minds: the orient became a place of mystery, ostentatious licence and fine palaces emerging in the half-light surrounded by lethal, desert sands.
Whereas in Europe, cold scientific light chased away the shadows where occult forces lurked, in these far flung lands, legends lived on in the vibrant sunshine and expanse of dunes that spawned the prophets until Jesus and where the Thousand and OneNights was written. It is this jumble of images, references and sensations that fuelled this half-real, half-fantasy fervour that characterised Orientalism in European art.

The great artists of the Maghreb back then were Delacroix, Eugène Fromentin and Théodore Chassériau who travelled there and made their art a reflection of their experiences. But they were the exception rather than the rule.  Orientalism often took the words of J.J. Rousseau on board: « let’s begin by dismissing all facts […] » (Discourse on the Origin and Foundations of Inequality among Men) in order to preserve the integrity of these fantasies with their suggestive eroticism, patently obvious in Ingres’paintingTurkish Bath.

And perhaps it is Gerard de Nerval’s Voyage to the Orient, a kind of travel journal-come-retelling of oriental tales that expresses the disillusion of the traveller best: « All this has been splendid and marvellous without a doubt, but thirty generations have passed here; everywhere the stone is crumbling and the wood is going rotten. It seems that we are travelling in a dream to a city from the past, inhabited only by ghosts who populate it without giving it life. » He wrote the following to his friend Théophile Gauthier: « The city of the Thousand and One Nights is a bit run down, a bit dusty […] and what’s sad is the poverty of the locals.  You did well to put Cairo in a ballet before seeing it for real. »  Because art must prevail, the ballet would have been less beautiful if it had been stained by the reality. The comments made by Nerval to his friend Jules Janin express the nub of his disappointment:   « In short, the Orient doesn’t come close to the dream that I had two years ago or maybe this Orient is further off or on a higher plane, I’m tired of running after poetry; I believe that perhaps it is at your door or maybe even in your bed. I’m still the man that’s chasing after it but I will try to press pause and wait. » And it is this brief and fabulous story towards the end of the book, the History of the Queen of the Morning and Soliman, Prince of the Djinns, that would, by returning to mythology, express the quintessence of the Orient that history, dust and the daily din would conceal from him.

This sparkling Orientalism should therefore have dwindled. Soon trade, human migration and the end of colonial adventures would put an end to an art movement in which the Orient was a mirage, a kind of oasis of ancient bliss lost in the desert of facts.