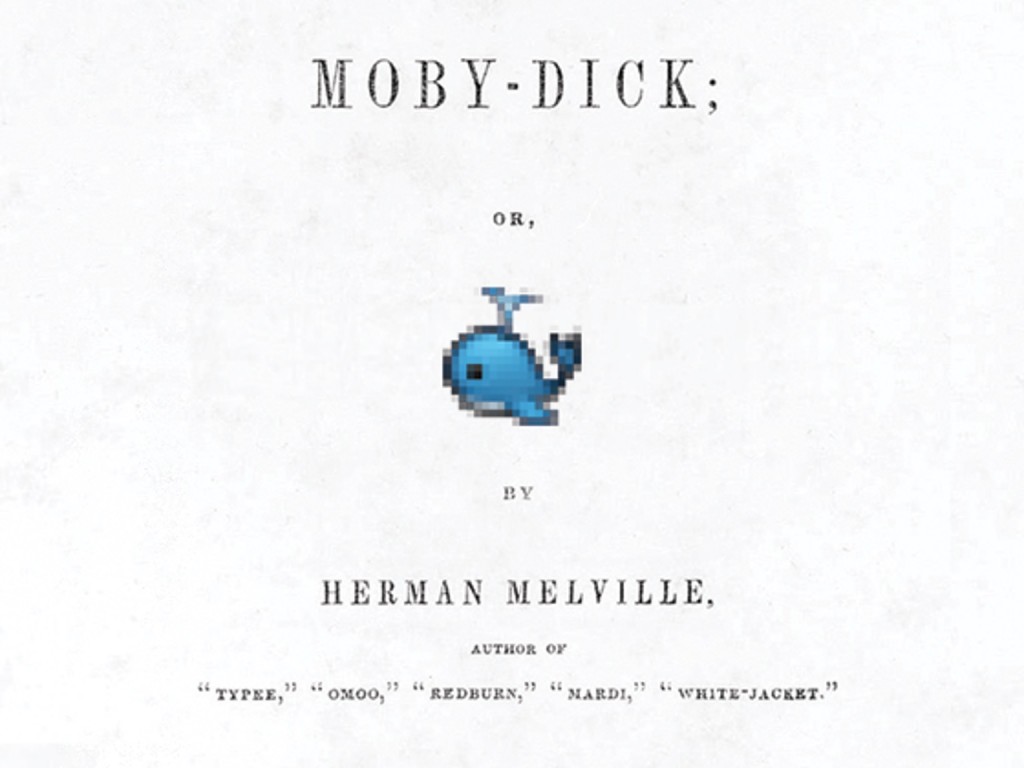 Emoji, an advanced guard of expressive bright yellow faces flanked by effigies of conduct, followed by divisions of drawings stylising objects from a coffee cup to the intergalactic cosmos, are interposed in interfaces – an essential part of hyper-interactivity.

We have no intention here of criticising the genius of Herman Melville, the author of Moby Dick, published in 1851, with his clever, poetic language, delving deep down in the abyss of human suffering. But just try to translate it into emoji dialect and you notice that even Herman Melville missed out on something. All that hassle for nothing. And it could have been so simple:-/

Translation necessarily implies language: and the emoji keyboard is already available. You can find those little faces hidden underneath the conventional keys for Palaeolithic letters still used by the hunter-gatherers, those azerty and qwerty keyboards of those backward people. Telephone, internet, books… and of course, the film is in preparation. The absence of copyright for the open-source emoji figures did nothing to dissuade the investors. And by the way, Sony won the bid for the film.

Joking about emoji doesn’t mean discrediting them. Besides the fact that their transnational and transcultural popularity gives food for thought, this new population of little characters symbolising our daily emotions and putting things into pictures allows for plenty of new propositions. At this stage, they all seem like gadgets, but time will probably select a few that will shape our habits, behaviours and even cognitive solutions. It is a fact for example that life on the net requires numerous passwords, that systems require them to be more and more complicated, and that in fact you can’t remember any of them by heart. But emoji passwords would be easy to remember, and their vast numbers allow more combinations than you could possibly need. Because the brain remembers images more easily. As we often learn by associating information with pictures, who knows? – emoji might play an interesting role in teaching!

It is the same with the creative applications that bring them to life. The software that lets you produce an emoji of your own face from a photo seems trivial and is always good for a laugh. Their interactive playfulness can also herald a transformation. The US “don’t emoji and drive” road safety campaigns are particularly relevant, not only for their warning, but also because they guard against the illusion of taking the world for a gigantic emoji game at the risk of a fatal accident, a sort of return to the real world with no interface… ô~_~ô

The animated films are brilliant. We have kept the funniest and most interesting for the end, here. Maybe the most important thing is to have the choice whether or not to use emoji, and not just have the directory without caring about the formulations. This is rather like Bartleby who has a fall-back solution to the emoji invasion: without openly refusing his employer’s commands, he answers, “I would prefer not to”, a strategy consisting in shirking responsibility without actually opposing, leaving the enemy powerless. Published in 1853, Bartleby, or Bartleby, the Scrivener – A Story of Wall Street, is a short story by Herman Melville.

Candle, scented ovale soap and capsule on the one hand, and rebus, allegories and digital implementation on the other hand: the collaboration of fashion designer Olympia Le-Tan with diptyque on fragrance Rosafolia, illustrated by the theme of a woman’s bag and expressed by the rebus in emoji “the key of my heart is in my bag” comes along with an exclusive series of emoji available to download here 🙂